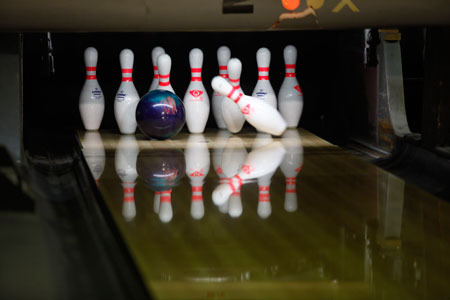 A key component for understanding ball motion for any player is being described as “release ratio.”  It’s how fast the ball is traveling down the lane verses how fast it’s spinning. Based on a bowler's tilt the same rev rate, let's say 350 revolutions per minute (RPMs), isn’t going to react the same for each bowler using it.

For great pin carry and to avoid corner pins, a bowler's release ratio should allow the ball to spin as fast as it’s traveling down the lane, right as it’s entering the pins. This is the “roll phase” of ball motion and the best phase for pin carry, specifically corner pins.

In case that just lost you, let’s first break down what we mean by making sure the ball is in its “roll phase” with a video below from the USBC Bowling Academy:

To adjust the possibility of the ball getting into the roll phase of ball motion, a bowler can change how fast the ball is thrown by speeding up or slowing down their approach and they can change how much they make the ball spin by changing their hand position. Tempo and hand action are the tools a player uses to control skid, hook, and ultimately “roll” before the ball impacts the pins.

If the ball is entering the roll phase before impact, it could be the angle of entry causing the corner pins and there are multiple ways to leave the corners. For example, if a right-handed bowler leaves a "flat 10" then the ball is most likely entering the pocket too straight, causing the 3-pin to go back and barely hit the 6-pin then sliding the six in front of the 10 and laying in the gutter. If the entry angle is steeper, the 3-pin hits more of the six and still drives the six upward around the neck of the 10 pin, known as a “ring 10.”

Both a “flat 10” and a “ring 10” are not positioned to get the 3-pin to hit the six and the six to hit the 10 correctly. Steeper entry angles will give the best chance to take out the 10. Still using our right-handed bowler example, throwing the ball further to the right and increasing the rev rate are typically the first moves to increasing entry angle. Changing balls to something with a stronger back end motion is another adjustment and, if possible, moving both the feet and eyes extremely to the right side of the lane and playing more direct through the front and mid parts of the lane can increase the entry angle for better carry.

However you choose to adjust, learn to increase your entry angle with tempo, targets, and hand position and you’ll carry more corner pins.