There are as many different bowling styles as there are bowlers, everyone’s unique. However, there are a couple styles that show up more often because they work. Here’s a quick look into three styles you may see in action.

The traditional (4 step) delivery is without a doubt the most used by any level player. Here’s a quick explanation of how it’s done.

The four-step delivery is great for athletes to develop sound fundamentals.

Walk to the foul line; turn around with your back to the pins and the center dot two inches behind your feet. Take four and one-half steps back from the foul line and turn on your toe to face the pins. This is the starting point.

(Stance) Set up in an athletic pose, knees flexed, posture slightly forward, and the ball balanced in both hands.

(Finish) After releasing the ball, follow through towards the target bringing the elbow above the shoulder. Stay balanced and watch the ball until it rolls over the target and into the pins.
*It’s important to reach out and fully extend the arm so the elbow finishes above the shoulder. This completes the motion of the armswing and reinforces accuracy toward the target.

A five step version of the same approach simply includes a step before the ball and ball-side foot move together, just remember to take 5 ½ steps when measuring the distance to start from the foul line.

The Two-handed approach has become the most popular new technique for bowlers who want faster ball speeds and higher revolution rates to attack the pins. It’s much like the traditional four or five step approaches with just a few tweaks.

(Stance) Set up with knees flexed, posture slightly forward, place the fingers in the ball (thumb optional) and the opposite hand on the top-front portion of the ball.

(Finish) After releasing the ball, follow through with the elbow up next to the head.


*It’s important to remember that the tempo of the two-handed approach is much quicker than the traditional 4 or 5 step because of the shorter back swing. 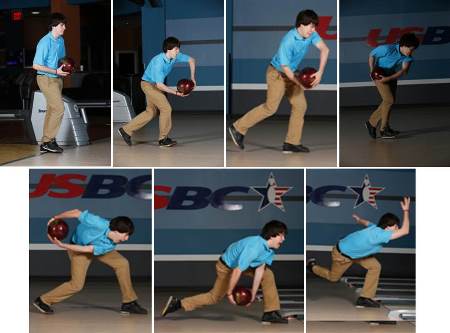 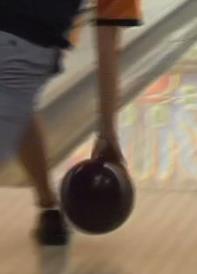 The Spinner approach is a unique style. While it’s not as popular as the 4-step or the growing Two-Handed approach, it can be effective under the right circumstances. The Spinners game uses a lighter weight ball and can be very accurate, especially when making spares.

The Spinners approach is the traditional 4 or 5 step method with a release that makes the ball spin a lot as it goes down the lane and hits the pins. The bowler depends on the ball spinning off the pins and deflecting a lot to knock them down.

During the Spinners approach the lighter ball weight allows the wrist to rotate the ball very early in the down swing and the palm of the hand faces down toward the floor during the release. (see above)

There are many styles to draw from and once you’ve discovered your own the real fun will begin. However you choose to bowl remember that the rules of the game are still the same, stay behind the foul line and knock down the pins.

To see examples of these bowling styles in action check out this video of bowlers from around the world competing in the WTBA 2013 World Championships.