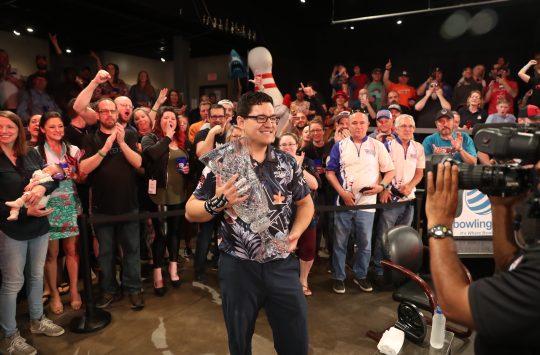 Five major championships, including the U.S. Open for the first time on FOX, highlight the series of 13 tournaments taking place in nine different cities from January-March in which players will earn points toward qualifying for the PBA Playoffs.

The 2020 PBA Playoffs will again feature the top 24 from the points list in an elimination bracket with all matches televised, expanding to multiple locations as the tournament progresses. As part of a PBA partnership with Bowlero bowling centers, the first round will begin April 6 in Norco, California; the Round of 16 in Westminster, Colorado, April 20-21, and the Round of 8 May 10-11, in Euless, Texas. The Playoffs will conclude with the Final Four and Championship matches on May 16-17 in North Brunswick, New Jersey, live on FOX.

“Launching our partnership with FOX made 2019 a special year for the PBA, and it could not have delivered more drama and history to our fans,” said PBA Tour Commissioner Tom Clark. “Sellout crowds in special venues across the country watched the greatest bowlers in the world put on tremendous shows week-after-week, and in 2020 we are excited to bring the action to even more locations.”

The 2020 schedule and PBA Playoffs points race begins Jan. 14-19 in Arlington, Texas, at the International Bowling Campus for the PBA Hall of Fame Classic, followed by stops in Shawnee, Oklahoma, and Jonesboro, Arkansas, before a string of majors in February (PBA Tournament of Champions at historic AMF Riviera Lanes in Fairlawn, Ohio, Feb. 4-9; the PBA Players Championship at Wayne Webb’s Columbus Bowl in Columbus, Ohio, Feb. 11-15; and the U.S. Open at Sun Valley Lanes in Lincoln, Nebraska, Feb. 18-23). Big February concludes with two events in Indianapolis at iconic Woodland Bowl, including the Mark Roth/Marshall Holman PBA Doubles Championship.

The Tour will then shift to the west for two of the most anticipated events of the year, beginning with the PBA World Series of Bowling XI at South Point Bowling Plaza in Las Vegas, March 6-19. WSOB XI will feature four title events including the PBA World Championship, where Australia’s Jason Belmonte will defend after winning his record 11th major championship in that event in 2019. The WSOB will again feature five consecutive days of TV on FS1, including live telecasts of all four title events.

Following WSOB XI will be the fifth major of the year, the USBC Masters in Reno, Nevada, March 23-29. The Masters, airing live on FOX, will be the final event for players to earn points toward the 24 berths in the 2020 PBA Playoffs.

All early rounds of all events on the national schedule, and international coverage of the finals, will again be livestreamed on FloBowling.com.

Full television schedule and times are also to be announced.

2020 RACE TO THE PBA PLAYOFFS SCHEDULE