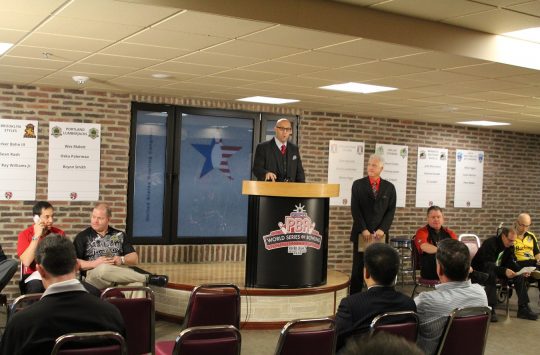 CHICAGO (Oct. 5, 2016) – The Dallas Strikers will begin defense of their PBA League Elias Cup championship knowing the core of its team is intact, as player/manager Norm Duke made sure reigning League Mark Roth MVP Tommy Jones, Bill O’Neill and himself will be back when the fifth annual PBAL season returns to the newly-reconstructed Bayside Bowl in Portland, Maine, in April.

All eight teams named the three players they were allowed to protect from their 2016 five-player rosters on Tuesday.

The two Strikers who also played critical roles in the team’s success last year left unprotected were Shawn Maldonado and B.J. Moore. Those two plus the other unprotected players from 2016 rosters will be placed into the PBAL Draft pool, and will be joined by other PBA members who declare themselves eligible for the Draft by Oct. 11. The Draft will be covered live on Xtra Frame from South Point Bowling Plaza in Las Vegas on Wednesday, Nov. 2, where the teams will be filled out after two rounds of selections.

Players protected by their respective team managers include:

The PBA League draft, which will be covered live by PBA’s Xtra Frame online video-streaming service, will be conducted at the conclusion of the PBA Fall Classic presented by South Point Bowling Plaza in Las Vegas. Team managers will draft in reverse order of where they finished in 2016, meaning the defending champion Dallas Strikers will draft last and the eighth-place Philadelphia Hitmen will have the first pick. The draft order, following Philadelphia, will be L.A. X, the Brooklyn Styles, Silver Lake Atom Splitters, Portland Lumberjacks, Motown Muscle, the 2016 runner-up New York City WTT KingPins and Dallas.

The PBA also will stage a PBA League exhibition during the GEICO PBA World Series of Bowling VIII at the National Bowling Stadium in Reno on Dec. 3. That event also will be covered by Xtra Frame, providing fans with an early preview of the competition to come.

A special highlight of the 2017 PBA League program will be the introduction of the new Bayside Bowl “stadium” center in Portland, including a major expansion of the facility’s previous 12 bowling lanes to 20 for the new season.

Additional information about the PBA League will be announced soon through the entire family of PBA Network media outlets. For Xtra Frame subscription information, visit: xtraframe.tv and click on the “subscribe now” screen.