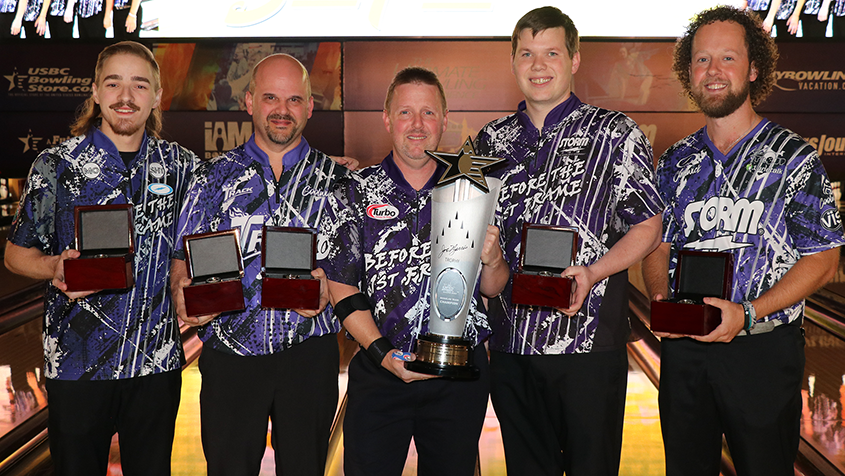 LAS VEGAS - Country music's Jimmie Allen talks about the good guys, the comeback kids and the long shots in his song "Underdogs."

While the members of Before the 1st Frame 1 of Battleboro, North Carolina, don't necessarily fit the billing of a long shot nowadays at the United States Bowling Congress Open Championships, the group's journey to continued success on the lanes echoes the sentiment of the lyrics on the way to an unforgettable triumph.

The team of Chris Hans, Brian Locke, Dylan Macon, Dennis Killough and 2021 Professional Bowlers Association Player of the Year Kyle Troup captured the Regular Team title last year at the South Point Bowling Plaza with a 3,400 total, and though the group was not able to repeat the feat in 2022, they were able to reflect on and appreciate the performance that got them there.

They were introduced at the Bowling Plaza to the aforementioned Allen track prior to their team event, and Hans, the coordinator of six teams at this year's USBC Open Championships, spoke at length during the ceremony about the community around him that helps make the on-lane success possible.

With the presentation of the Joe Norris trophy, it officially turned the page to 2022 for the emotional team members, who then were just minutes from putting their title on the line.

"As much as you want to get back to bowl, it's kind of like you don't want that year to end," said Hans, who made his 21st Open Championships appearance. "It's such an honor for us to be the defending champion that when it got time to bowl, it was kind of bittersweet. We didn't bowl as well as we would have hoped this year, but we wish nothing but the best for the team that gets to celebrate it this time around.

"Holding the trophy was the end of the whole process. I knew once I grabbed it, last year was over, and we would have to do it again to be able to experience everything we did. It's also pretty special to think that every year we come back, our names and Before the 1st Frame will be forever tied to that. It means so much to us."

The team struggled early on this year and finished the opening game with an 890 total. Knowing a return to the top of the standings was unlikely, things loosened up, and the focus turned to encouraging one of their companion teams - Before the 1st Frame-Wolfes - to a spot in the top 25 of the Regular Team standings with a 3,356 tally.

"I asked a few people leading up to the tournament about how hard the first game was going to be, and my first shot was certainly hard to let go of," Hans said. "After that, I felt OK and was able to get the heart rate down, and I think all the guys were in the same boat. The lanes played significantly different for us, and even though we knew it, it was more so than we guessed.

"That's one of the things that makes it so hard to win. Your game plan can be off a little bit, and you really get penalized for it, and even when you get it right, that doesn't mean instant success, either. As we started to figure out the difference in the two lanes, the scores got better."

The title-winning performance for Before the 1st Frame 1 in 2021 included games of 1,063, 1,155 and 1,182, and the group secured the top spot with approximately two weeks left in the tournament.

The return to the lead was a familiar one for Hans, who had the experience at the 2012 event in Baton Rouge, Louisiana, where he and Texas' Ryan Whitney claimed the lead in Regular Doubles, before settling into ninth place by the end of the tournament. Whitney also left with the lead in Regular All-Events and Regular Singles, ultimately finishing in second and seventh, respectively.

"It's such a unique feeling when you take the lead," Hans said. "When we did it in Baton Rouge, we had bowled pretty early in the tournament. Even though we had gotten to the lead, you kind of think with that long to go, it wasn't going to hold on. That ended up being the case.

"Last year, there were only two weeks left, and I really felt like we had enough. I really did. It was such good bowling on everybody's part, and I didn't feel like we left anything out there. We really got all we could the last two games. We enjoyed that moment last year, but it wasn't until the end of the tournament that it really started to hit home and sink in."

Locke, who joined the group in 2019 for his tournament debut and helped the team to a sixth-place finish, noted that the wait to see if they had enough kept him on the edge of his seat.

"We had taken the lead, and I was really emotional after that happened," said Locke, who made his third tournament appearance in 2022. "We had two weeks to wait, and that was a pretty long two weeks. A couple of good teams had a chance at it, but we held on. I definitely sweated it out for a couple weeks."

Troup made his first appearance with Before the 1st Frame in 2014, a year before capturing his first PBA Tour title. The team win ranks near the top of a growing list of accomplishments for Troup, and even from the early going, he knew was part of something special at the Open Championships.

"To win a team Eagle against thousands of other teams, with five people all coming together, has to be one of the hardest tournaments to win in the world," Troup said. "I think I was about 19 years old when Hans started talking about building an Eagle-winning team to contend year after year, and he spoke a lot about the support and people we have that join us, and that's really special.

"It's a moment we'll cherish and remember forever, and to have 50-60 people with us bowling and showing support from the stands is something we'll never forget. It was more than just the five of us who won the Eagle."

The first appearance of Before the 1st Frame at the Open Championships took place at the 2011 event in Reno, Nevada, and featured two teams, primarily made up of bowlers from the same bowling center, plus Whitney.

The goal was to put in the time and effort to build something special at the event, and with Hans' guidance, the group has continued to grow and succeed.

The Eagle-winning performance in 2021 may have belonged to the five players on the team, but the entire contingent is proud to be part of something bigger.

"I feel the group trusts me to put them in the best position I can, and I take that very seriously," Hans said. "I think because of the success we've had, they're fine with entrusting me with that. But, the support from the group each year, and certainly while we were bowling last year, was so instrumental in us being able to pull off what we did. I hope they all take a sense of ownership in that.

"We built this group in 2011 to try and win some Eagles, and we've accomplished that at this point. We're going to keep our heads down and push forward, and as great of an experience as that was for us, I certainly would take as much pride in some of the other people in the group being able to pull that off. That would mean as much to me."