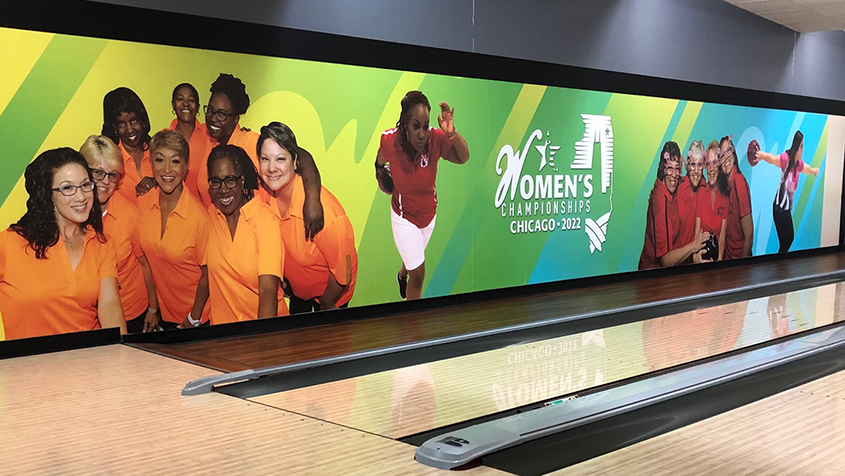 ADDISON, Ill. - The final ball has been rolled at the 2022 United States Bowling Congress Women's Championships, with the 102nd edition of the tournament coming to a close Sunday.

The event made its debut at Stardust Bowl in Addison, Illinois, in 2022, marking the tournament's first visit to the Chicagoland area since 1935. In all, 3,155 four-player teams competed in the 71-day event, which kicked off April 24.

All standings are unofficial and pending final verification.

Jodi Sarney of Streamwood, Illinois, put together a historic run June 12 to place herself in the tournament's record book and at the top of leaderboard in Diamond All-Events.

Sarney became the third bowler at the USBC Women's Championships to record both a 300 game and 800 series on the championship lanes during her doubles set, delivering games of 227, 300 and 279 for an 806 series. She struck on 26 of her final 27 shots in the series.

Sarney was the only bowler at the 2022 Women's Championships to record an 800 series, and it was the 11th in 102 years of competition at the event.

Suzanne Morine of Castleton-on-Hudson, New York, and Robin Orlikowski of Grand Rapids, Michigan, are finishing their second consecutive appearance at the top of the standings at the Women's Championships after posting the top doubles score at Stardust Bowl.

The top singles score of the year occurred during the final week of the 2022 event, as tournament newcomer Kelsey O'Brien of Frankfort, Illinois, rolled games of 265, 253 and 256 on June 26 for a 774 series to take over the top spot in Diamond Singles.

The members of Verity's Variety of Lake Wales, Florida, posted the top team score in 2022, which was powered by the top team game at Stardust Bowl.

The team, featuring Lori Edwards, Kathy Ledford, Verity Crawley and Haley Hall, rolled games of 786 and 894 before finishing with 1,006 to get to the lead in Diamond Team with a 2,686 total May 17.

The day after taking the team lead, Crawley became the first of four bowlers to record a 300 game at the 2022 event during her doubles set, bringing the all-time total to 38 at the Women's Championships.

Sarney was the second to achieve the feat, while Latasha Cole of Detroit and Krystina Beasley of Anderson, South Carolina, added their names to the list June 25 and June 26, respectively.

Participation also highlighted the 2022 event, with one bowler making her 60th appearance and eight joining the 50-Year Club at the Women's Championships.

Onalee Kraus of Coldwater, Michigan, became the fifth bowler in tournament history to reach 60 appearances when she made her trip to Stardust Bowl on June 6. She began her career at the 1957 event in Dayton, Ohio.

There was a brief hiatus during the Women's Championships to welcome the USBC Queens to the 84-lane venue. The Queens is a major championship on the Professional Women's Bowling Association Tour schedule.

The 2023 Women's Championships will be heading to the South Point Bowling Plaza in Las Vegas from April 23 - July 2.
Skip Ad