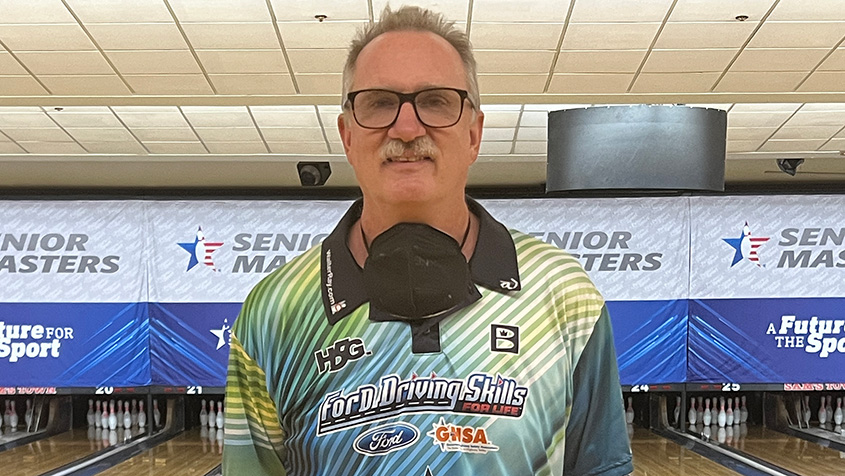 LAS VEGAS - There were plenty of strikes to be had for big names on Day 1 of match play at the 2022 United States Bowling Congress Senior Masters from Sam's Town Bowling Center at Sam's Town Hotel and Gambling Hall.

Bohn III said that he has been trying to keep his angles in front of him and play straight most of the week.

"I might be a little farther out near the gutter or stay up four-five-six range, depending on what I feel like the lane is giving me at the time, seemed to be a little more advantageous especially as I was crossing the center," Bohn said.

Bohn was using the Quantum Evo Pearl for most of the day.

"That is the ball that has been doing most of the work this week, but I did throw my GB4 Pearl, and it seemed like it matched up well. It goes a little bit longer and snaps a bit more on the backend and well, I am not crazy on the snap, especially when I am bowling on a sport pattern," he said.

Bohn III said that while he has been throwing a ball for a long time, bowling with his son, Brandon Bohn, on the King of the Lanes show, does not compare.

"When I can take one of my children, and it's not just my son, but my daughter as well, there's nothing more rewarding than doing it with your children."

Not everybody was striking a ton, but those that were, often did it in bunches.

"Even though it's a 40-foot pattern, it feels like a 45-foot pattern for me," Williams said. "It hooks a little bit in the middle of the lane. The outside of the lane was a little tiny bit of hook and I tried to play off of that."

In his second match of the day, Williams said he had a little too much hook because he bowled after the burn squad. But in his last match, hoping to stay alive in the tournament, he carried everything.

"I carried everything except for one shot," Williams said. "It's the first time I have ever had a pin come out of the gutter and stand up," he laughed.

He said he just wanted to keep the ball in play in his last match.

"That pair was really tight," Williams said. "I hit the pocket in all the right spots. It wasn't high flush every shot, but it was enough to get the pins to fall down."

Williams Jr. will bowl Gary Alstott, with both players hoping to stay alive in the tournament and work their way to the stepladder finals, the harder way that is.

Other players, including some of the biggest names in the sport, have a much easier road to the BowlTV show. Chris Barnes, Chris Warren, Tom Hess, Bohn III, Lennie Boresch and Amleto Monacelli are some of the players that stayed in the Winners Bracket.

Barnes will match up against Monacelli in what will be, at least on paper, one of the highest profile matches entering Saturday's final match-play round.

By the end of Saturday, the field will be cut to the top five for the stepladder finals, which will take place on Sunday at 1 p.m. Eastern.
Skip Ad