A Funny Thing Happened to Andrew Anderson After His Masters Win 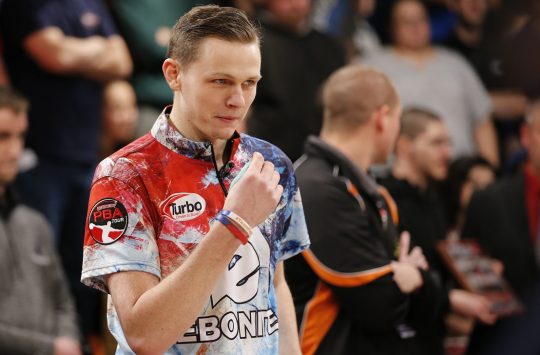 Winning the United States Bowling Congress Masters Sunday in Syracuse, N.Y., was the biggest moment in 22-year-old Andrew Anderson’s young bowling career, but it’s what happened afterward that will make the experience unforgettable.

The second-year PBA member, riding a hot streak after a third-place finish in the PBA Tournament of Champions in February followed by his first PBA Tour victory in the Masters, was headed back home to Holly, Mich., when PBA CEO and CommissionerTom Clark, fellow competitor Chris Barnes, the recently-inducted PBA Hall of Famer, and others convinced Anderson he should head to Portland, Maine, instead to bowl in the Port Property Management PBA Xtra Frame Maine Shootout.

Because Anderson had not been drafted by an OceanView at Falmouth PBA League team, which will compete later in the week at Bayside Bowl in Portland, he had planned to bypass the Xtra Frame event preceding PBA League competition in Maine.

But with his plans changed, Anderson headed to the airport in Syracuse to fly to Portland. Clark, Barnes, PBA Vice President-Marketing Janay Haggerty, PBA Social Media Manager Kim Richter and a bunch of other PBA players and staff members also were at the airport when all flights out of Syracuse were cancelled. That’s when the “fun” began as everyone scrambled to figure out how to get to Portland.

“I’m at the airport when Barnes texted me and asked what I was going to do,” Anderson said. “I was headed off to rent a car when I ran into Kim (Richter) and Tom (Clark) coming down the stairs.

Haggerty was off looking for a car to rent for the PBA staffers drive to Portland, and they asked Anderson and Barnes if they’d like to ride along.

“I’m waiting for Chris, who was trying to get a refund for his flight, when Janay rolls up with a mini van,” Anderson said.

Despite horrid weather conditions, including freezing rain and frigid wind, the fivesome headed to Portland – about a half-hour behind PBA Deputy Commissioner Kirk von Krueger and his wife, Mary, who had gotten a head start. Richter was behind the wheel at the start, and Barnes took over driving duties as they headed through New Hampshire, when the van’s digital reading suddenly indicated the left rear tire was losing air…at a rapid pace.

“There was no exit for about five miles,” Haggerty said, “but we finally got to a gas station in the middle of nowhere that was still open at around midnight on Sunday.

“Tom and Barnes went into the gas station, and Tom comes out with a can of inflate-a-tire,” the 6-foot-2 Anderson said. “He wasn’t sure what to do with it, so Janay (who is 5-foot-4) loaned me her jacket, and I tried to inflate the tire for 15-20 minutes in cold, freezing rain. The tire looked better, but then I saw big hole blowing air out as fast as it was going in.”

The station attendant “comped” the hot chocolate, and told the group he had a buddy who did roadside repairs. So a quick call summoned help.

The PBA group never got his name, but afterward they nicknamed their rescuer “Lugnut.” Haggerty’s earlier call to the car rental company had resulted in little help other than learning most rental cars these days do not include a spare tire…and that help would not be on its way until Monday morning.

“Lugnut,” however, knew there was a “secret compartment” in the van that housed an emergency “tire” of sorts. After unloading all of the luggage and bowling equipment in the van, Lugnut found the emergency tire, inflated it and the group was almost ready to resume the trip as Lugnut drove away. But suddenly Lugnut put his tow truck in reverse and roared back at high speed.

“I forgot to check lugnuts,” he said. “I wouldn’t be able to sleep if I didn’t check the lugnuts.” Hence the nickname…

Like all good stories, this one ended at almost 4 a.m. when the cold, weary PBA travelers checked into their hotel rooms in Portland, fortunate that there was no serious activity other than a practice session scheduled for Monday.

“I’m going to tell this story the rest of my life,” Anderson said. “Who would have thought… I had no plans whatsoever about coming to Maine, but those guys all talked me into coming, so it’s their fault…”