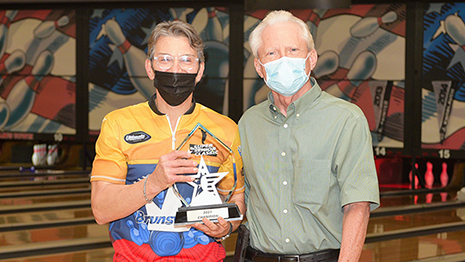 LAS VEGAS - Venezuela's Amleto Monacelli was the best bowler this week at the 2021 Super Senior Classic, and he proved it one more time Monday afternoon with an 11-strike victory over local standout Ron Mohr in the title match at Sam's Town Bowling Center.

The United States Bowling Congress and Professional Bowlers Association Hall of Famer was a 2 pin away from perfection in the 279-201 win against Mohr, who was bowling for the Super Senior Classic title at Sam's Town for the third time in five appearances.

The win earned Monacelli $7,500. All rounds of the Super Senior Classic and upcoming USBC Senior Masters are being broadcast live on BowlTV.

Monacelli, who has been 60 years old for less than three weeks, was making his debut at the premier event for USBC members age 60 and older, but it was not his first taste of success at the 56-lane facility. He won the 2019 Senior Masters there and will have the opportunity to defend that title beginning Tuesday.

"Today was only one game, and the most important thing was to do my routine, which includes stretching and a little bit of cardio to get my blood flowing," Monacelli, also a 10-time PBA50 Tour winner and 20-time PBA Tour titlist. "I came in confident after winning earlier in the year and then finishing third at the (Senior) U.S. Open last week. To continue that success today feels great. At the same time, I know I need to keep doing what I'm doing and not relax. Keeping the process is the most important thing, and now I'll focus on the next event."

The right-hander earned the top seed for the stepladder after dominating the 157-player field across two days of qualifying, the Cashers' Round and six games of match play, averaging nearly 230 over the 24 games.

Before, and between, the preceding stepladder matches, Monacelli had a chance to throw practice shots on the championship lanes. It gave him an idea of what he'd need to do, but it was his decades of experience that helped him adapt the game plan on the spot.

"I had a chance to practice on the pair, and I saw a big difference between the two lanes, so I came up with a strategy, but I knew it could change by the time I came back to bowl the match, and I was right," Monacelli said. "I was able to try playing a little more inside with a different ball, and my reaction was spectacular. Then, it was about staying in my process and making good shots."

A Las Vegas resident and PBA Hall of Famer, Mohr won the Super Senior Classic in 2017 after finishing as the runner-up a year earlier. He earned the opportunity Monday to become the event's first two-time winner with a clutch finish against New York's Glenn Smith in the semifinal.

Mohr converted the 4-9 split in the sixth frame and struck on his last four shots to sneak by Smith, 224-217. Smith, a 61-year-old right-hander, is a rookie on the PBA50 Tour this season, and his third-place performance Monday marked his first top-10 finish on the national stage. He entered the stepladder as the No. 2 seed.

In the first match of the championship round, Mohr struck four times in his first five frames to build a sizable lead over first-time participant Walter Ray Williams Jr. of Oxford, Florida.

A 4-6-7-10 split in the eighth frame ended any chances for Williams, who recently won his record 15th PBA50 Tour title to go along with a record 47 PBA Tour victories. Mohr added three strikes late in the game for a 247-218 win.

Mohr and Williams were two of the six players who arrived at Sam's Town on Monday ready to battle for the two open spots in the main stepladder. The first two slots belonged to Monacelli and Smith, who were dominant through qualifying, the Cashers' Round and match play. 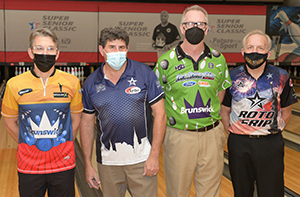 The group stepladder matches that kicked off the action Monday included the second, third and fourth seeds from each of Sunday's two match-play groups, with the winners claiming the No. 3 and No. 4 spots in the finals. Their seeding was based on their averages for the event.

In the Group A stepladder, Michael Karch of Edgewood, Washington, started the day with six consecutive strikes but needed to spare a 2 pin in his 10th frame to sneak past 2019 Super Senior Classic runner-up Hugh Miller of Mercer Island, Washington.

Miller closed with four strikes to force Karch to mark, which he did, for a 235-224 victory.

In the Group A final, Karch struck eight times, including his last five shots, but a 4-6-7-10 split in the fifth frame proved to be his undoing, allowing Williams to take the lead and lock up the victory with three strikes in his final frame. Williams, also a USBC and PBA Hall of Famer, advanced by a score of 238-232.

In the Group B stepladder, Mohr avenged a 2019 group stepladder loss to Darryl Bower of Middletown, Pennsylvania.

Despite three opens in his first five frames, Mohr was able to close with seven consecutive strikes to put the pressure on Bower. A 7-10 split in Bower's final frame allowed Mohr to advance, 213-194.

Mohr's momentum continued against Widmar Vargas of Sun City Center, Florida, though he faltered briefly with a missed 7 pin in the opening frame.

Vargas opened three times in the first six frames, while three consecutive strikes from Mohr, starting in the fourth frame, allowed him to cruise to a 216-166 win.

"The best player this week won, and there's no doubt," Mohr said. "He had a good look, he's bowling with a lot of confidence and he's throwing the ball well. I didn't expect him to shoot 270, and I thought maybe if I could shoot 240, I'd be competitive. I let it get away early, and he's a good enough player to know exactly what to do in that situation.

"Honestly, I was ecstatic to get this far after the way I struggled figuring out the pattern. I finally found something that worked and bowled pretty well at the end, so I'm happy overall."

The 157 competitors this week at Sam's Town rolled 12 games of qualifying over two days, before the field was cut to the top 40 for the six-game Cashers' Round.

The top 12 bowlers, based on their 18-game pinfall totals, advanced to round-robin match play Sunday, where they were split into two six-player groups - Group A and Group B - with all odd-numbered qualifiers going to Group A and all evens going to Group B.

At the conclusion of match play, the leader from each group automatically advanced to the final stepladder, earning the No. 1 and No. 2 seeds based on total pinfall for 24 games, including 30 bonus pins for each win in match play.

Monacelli, the Group A leader, earned the top seed by outdistancing Smith, who topped Group B, by 144 pins. The No. 2, No. 3 and No. 4 finishers in each group advanced to Monday's group stepladders.

The first win of Monacelli's 2021 season came in July at the PBA50 Odessa Open presented by Diamond Lanes. The word timeless continues to be used to describe his style, and his physical conditioning is unparalleled.

"Sixty is just a number, and it's all about how you take care of yourself," Monacelli said. "I'm a guy who works very hard to keep my body right, from my physical training to mental training to my nutrition. I'm on top of that. I treat myself like an athlete, and it continues to help in my performance."

The spotlight now shifts to the Senior Masters, which will get underway Tuesday with the first of three days of qualifying. The field of 230 of the best USBC members age 50 and older will compete for a $20,000 top prize and PBA50 Tour major title.

Monacelli is the defending champion at the Senior Masters and looking to become the first bowler to win in back-to-back years since Tom Baker of King, North Carolina, achieved the feat in 2007.

The Super Senior Classic and Senior Masters are returning to the 56-lane Sam's Town Bowling Center together for the fifth time, a routine that began in 2016. The Senior Masters will be the final event of the 2021 season.
Skip Ad