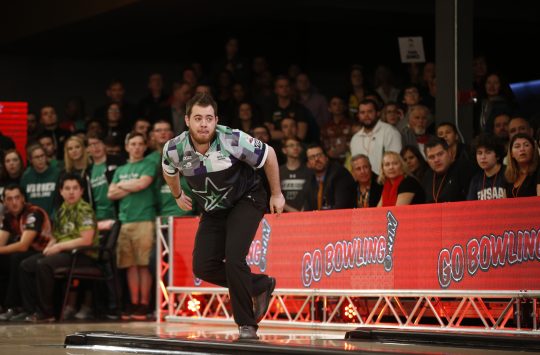 Simonsen, who won the professional side of the Elite Series bracket by defeating three-time PWBA titlist Stefanie Johnson, was invited to participate in the special event along with fellow PBA stars EJ Tackett, Norm Duke, Bill O’Neill and Jesper Svensson. PWBA was represented by Johnson, Mexico’s Sandra Gongora and Latvia’s Diana Zavjalova.

In unrelated news, Simonsen has withdrawn from the PBA China Tiger Cup because of a previous business commitment and will be replaced in the exclusive eight-man field of PBA stars by fellow two-hander Kyle Troup, the next qualifier in line to make the trip. Simonsen was the No. 3 qualifier in competition points earned during the nine-event FloBowling PBA Summer Tour; Troup finished ninth in points.

The PBA’s inaugural trip to China is set for Nov. 19-22 for a singles competition including a field of Chinese bowlers along with a U.S. vs. China team event. The American contingent will include points leader Sean Rash, Tackett, Jason Sterner, AJ Johnson, O’Neill, Kyle Sherman, Tommy Jones and Troup.