Matt Cannizzaro and Aaron Smith
EL PASO, Texas - When United States Bowling Congress Hall of Famer Bill Lillard Sr. of Houston threw his first strike at the USBC Open Championships in 1948, a pinboy hurried to reset the pins, while a man on a platform above the lanes shuffled over to put an 'X' on the scoreboard next to Lillard's name.

The pinboys and manual scoreboards now are long gone, but Lillard still is tossing strikes on the championship lanes. 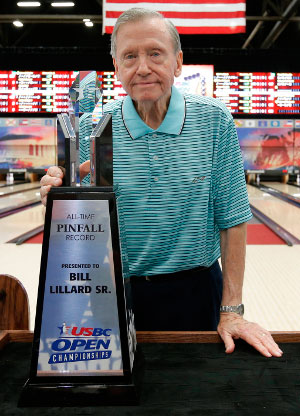 On Tuesday, the 87-year-old right-hander added to his Open Championships legacy as he became the tournament's career pinfall leader during his first game of singles in front of a standing-room-only crowd of friends, family, fans and fellow competitors at the El Paso Convention Center. He needed just 106 in singles to secure the record and got there with a strike in the eighth frame.

His wife, Dorothy, was in the audience, as she has been for more than 60 years, and USBC Executive Director Chad Murphy, USBC national board member Karl Kielich and Open Championships Tournament Manager Duane Hagen were on-hand to present Lillard with a special trophy commemorating the achievement.

"I'm just ecstatic right now," Dorothy Lillard said. "I am so happy for Bill and so proud that he was able to bowl well enough to get there. It also means so much that our family could be here and be a part of it."

Lillard entered the 2015 Open Championships, his 68th consecutive tournament, needing just 852 pins to match the 123,770 pins toppled by late USBC Hall of Famer Joe Norris of San Diego. Norris took part in a record-tying 71 appearances, with his last coming at the 2000 event in Albuquerque, New Mexico, a year before Lillard became a member of the elite 100,000-Pin Club, which currently has 15 members. 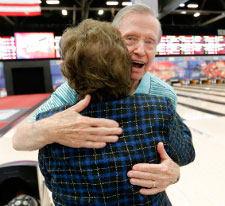 "I had been telling Joe since I had about 85,000 pins that I needed him to slow down, so I could catch him, only joking of course," said Lillard, who averaged more than 200 throughout most of his tournament career. "We saw his last three shots at his last tournament in Albuquerque, and they all were strikes, of course. He was a terrific bowler, and his record has lasted a long time. I'm very proud and excited to be able to reach that number, but records are made to be broken. I know there are some great bowlers who have a really good chance to catch me soon, too."

An eight-time Open Championships winner, and the first of three bowlers in tournament history to claim four titles in the same year, Lillard now has settled atop the career pinfall list with a 124,087 total.

"While we celebrate the achievement today, we really are here to recognize a lifetime of outstanding bowling by a very special competitor," Murphy said. "Mr. Lillard always has been a tremendous bowler and an outstanding ambassador for the sport, and I'm glad to have been here in person to see him reach this coveted milestone." 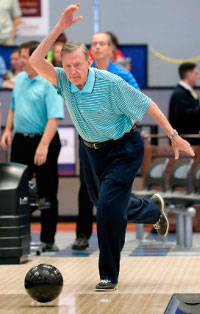 Slightly hampered by a slow recovery from a recent knee replacement, Lillard has been relegated to an abbreviated approach and worked his way up to using a 12-pound ball in El Paso this week, but that did not stop him from completing all nine games. This year at the El Paso Convention Center, he shot 422 in singles, 387 in doubles and 360 in team for a 1,169 all-events total.

"I had a partial knee replacement in October, and my hip has been bothering me, but I've been practicing a lot, probably three or four games at a time, particularly just standing at the foul line and taking a swing and a step," Lillard said. "My hope was that I'd be able to consistently hit the headpin and leave spares that were easier to pick up. I knew if I could get five or six spares a game, I'd have a good chance to get there."

The Texas State USBC Association Hall of Famer also is one of seven bowlers in 112 years of tournament history to reach 65 years of participation at the Open Championships. Norris and fellow hall of famer Bill Doehrman of Fort Wayne, Indiana, top the list with 71 years, while active participation leader Sylvester Thiel of Lake City, Minnesota, recently celebrated his 70th appearance.

Lillard was among the first to offer his congratulations to Thiel for his milestone appearance, as the tournament legends always have been very supportive of each other. Thiel and his wife, Phyllis, even called Lillard to wish him luck on the lanes this year.

"Everyone always pulls for each other, and I really enjoyed talking to Syl last week," said Lillard, who bowls doubles with his son, Bill Lillard Jr. "I've been lucky to share so many great experiences and conversations with so many bowlers and friends over the years."

Lillard's first victories at the Open Championships came in 1955 when he took home the team and Team All-Events titles as a member of Detroit's Pfeiffer Beer team. His record performance in 1956 included wins in team, doubles, all-events and Team All-Events, and he later added Classic Team victories in 1962 and 1971.

He is a charter member of the Professional Bowlers Association, claiming one title, the Miller High Life Open, in 1966.

These days, he's a familiar face in the Houston bowling community and stays active in a proprietary role at Palace Lanes.

Of all he's accomplished, the new record holder cites winning four titles in one year (1956) and later finishing third in doubles with his son (Memphis, Tennessee, in 1981) as two of his top Open Championships memories. Bill Jr. now has 37 tournament appearances to his credit.

He also closely holds onto a piece of advice he received early in his career from a teammate, USBC Hall of Famer Buddy Bomar.

"The first thing Buddy Bomar told me was that we don't revisit the scorecards after we bowl," Lillard said. "There's nothing you can do to change things, so why bother counting up all the what-ifs and could-have-beens."