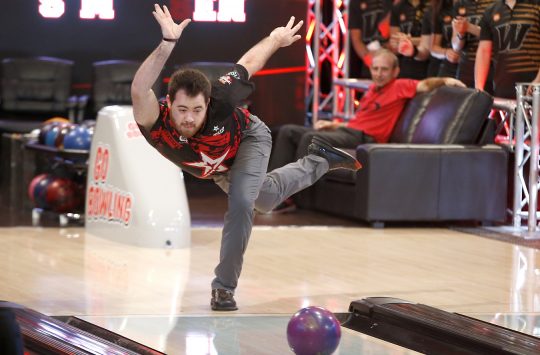 Before competing in the 2019 U.S. Open, this young gun on the PBA Tour, who already had amassed seven PBA Tour titles at age 22 including two majors, spoke with Bowlers Journal about the response he has received to the FloBowling documentary, “Leave it Behind,” which focused on his difficult upbringing in the Dallas-Forth Worth area, how his $100,000 Bowlero Elite Series windfall has changed his life, and much more.

Between your $100,000 windfall in the Bowlero Elite Series and your sizable winnings on the PBA Tour in 2019, how, if at all, has the money changed your life this year?
I don't think it's really changed anything. Honestly, the only thing it's gotten me to do is maybe get ready for a break, you know, mentally, just knowing that I can take one. But I still have all the gears turning going into the U.S. Open. I'm going to get through that one more event and then take a little refresh, just take a month off and kind of regroup and prepare myself mentally and physically for the upcoming season.

With all the emphasis among our sport's elite athletes on having a practice regimen and staying fit physically, what, for you, is the most important advantage of also allowing yourself to rest?
Just mentally, not having to think about ball reaction and layouts and this and that for a month, that will just give me a fresh start going into the 2020 season.

As a bowler who not only competes domestically but all over the world, can you describe for someone who doesn't live the life you're living what kind of a toll this takes physically on your body?
Physically, the bowling isn't as difficult as some of the traveling is. Most of the guys out here plan their own stuff, so it's different, but it's kind of one of those things where you have a job, you have a schedule, you have a to-do list, you know, there's other things that need to be done outside just the bowling alley.

What do you make of the life journey you have been on as you described it in the FloBowling documentary — going from that broke kid to now someone who is making six figures doing what he loves?
You know, persistence pays off. From an early age, I wanted to be a professional bowler. That had always been a dream. For it to happen as quickly as it has, I wasn't expecting that. I bowled the first few events out on tour four or five years ago and got my face kicked in every time. It would have been easy to say, 'Okay, maybe I can't do it.' But I think gaining knowledge from just competing with the guys, even just chit-chatting with them, has really helped me be successful.

So what is it you've learned that has helped you transition from that kid who got his face kicked in, as you put it, to the PBA Tour star you've become?
Me and Tommy Jones were having a conversation about this, and really, it's that five years ago, I knew how to bowl, but there's a difference between physically being able to learn how to bowl and understanding lane play, what your ball's doing, why it's doing that, and I think learning that, plus the physical aspects, has helped me tie everything together. Every time I am bowling, I am trying to gather as much knowledge as I can, not just what's working for me or for other guys but just keeping my ears open to tour reps and fellow players on tour.

What was it like for you to open up in as personal a way as you did for that FloBowling documentary?
That's never really been a problem of mine. I have no problem expressing what I'm going through, but I'm not someone who is like, 'Hey, you should feel bad for me. You know my story.' It's one of those things where, it's happened, there's nothing I can do, life's just going to go on, and I just need to keep pushing.

What has been the response to that documentary from family and friends?
Close friends who have kind of always known a little bit but not fully into detail, I think they got to see a different side of me. It was cool to see people I've roomed with actually be emotional, and when I walked into the room before everyone else and when I stood up to say a couple words afterwards, I was not expecting as many people to be there as there were, so that was heartfelt, knowing that there were that many people that I compete against that really did care to see what it was about.