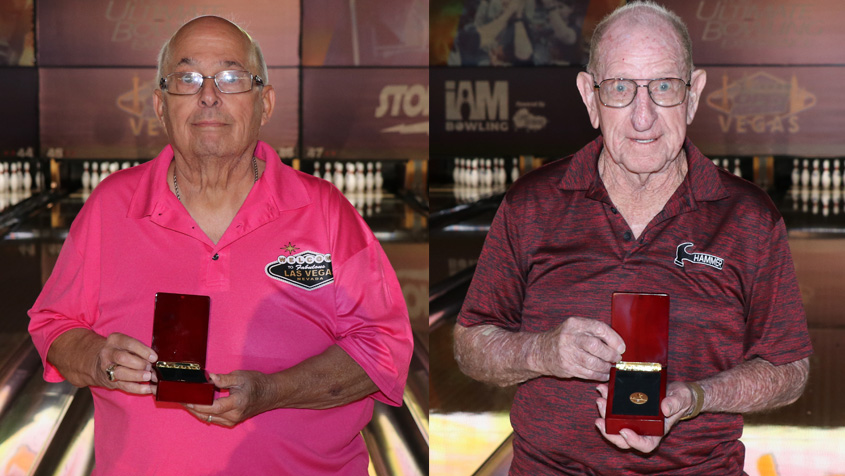 LAS VEGAS - Family support and appreciation recently was on display at the 2022 United States Bowling Congress Open Championships as Joe Greer of Muncie, Indiana, and Ed Duer of New Port Richey, Florida, made their 50th appearance at the tournament.

Greer and Duer each received a plaque, chevron and diamond lapel pin to commemorate their dedication and longevity at the South Point Bowling Plaza, and both were joined in their honorary presentation by family members who have supported their journey along the way.

Greer has not missed a tournament on his way to 50 consecutive appearances at the USBC Open Championships, and his debut came at the 1972 event in Long Beach, California.

"There were about five or six of us who said why don't we go out and bowl the national tournament," Greer said. "It was in Long Beach, so we drove out there and had a great time. It became a yearly thing for me after that."

Greer married his wife, Sandy, in 1977, and they have been together for 46 years. Sandy, along with his son, Brian, and daughter-in-law, Julie, were able to march him across the lanes at South Point as he joined the 50-Year Club.

"It was amazing," Greer said. "Having them walk out with me really meant a lot. It was a family affair for 50 wonderful years."

Greer has enjoyed the chance to see many familiar faces as he made his annual return to the tournament each year, and he was able to make a couple new friends from Georgia in his 50th appearance.

He found a spot through the tournament's sub board for the 2022 event, and he was excited to share the experience with them, too.

"I had never met the guys I bowled with, but they've been wonderful," Greer said. "They needed a bowler, and I was on the sub board. They had 25 guys from Augusta, Georgia, and now they're my friends. I told them they were in for a special treat, since one of the guys I bowled with two years ago was able to celebrate his 50th, and I knew it was a nice thing."

With his 50th appearance completed, Greer now has knocked over 59,545 pins during his career for a lifetime average of 167.7 at the event.

The 75-year-old made it through some health issues to compete in his 50th consecutive tournament, too.

"Just three weeks ago, I was in a nursing home," Greer said. "I had to go for this 50th, though. To be able to still make it out here is amazing, and I'm lucky to even be here."

Duer celebrated his milestone appearance on the same team squad as Greer, and his career at the Open Championships started in Miami in 1967. He has made his annual trek to the tournament each year since 1976.

The 87-year-old right-hander enjoyed his first tournament experience in Miami, and a string of strikes helped him develop his passion for the event.

"I was watching the guy put the strikes up by hand in Miami," Duer said. "I had a 150 average then, and I was doing really well and threw seven in a row. I watched him hang those big strikes for me. That hooked me on the tournament."

Duer has thrown a couple more strikes over the years, and after his appearance in 2022, he now has toppled 82,845 pins over 50 years at the event for a 186.5 average at the Open Championships.

He often drove to the tournament, and noted he made the trip for his 50th appearance in a 36-hour drive across the United States with his son, Steve, grandson, TJ, and son-in-law, Chuck.

Being able to celebrate the moment and spend time while traveling across the country with them was special for Duer.

"It means a lot," Duer said. "If it wasn't for these guys driving me up here, I wouldn't be here."