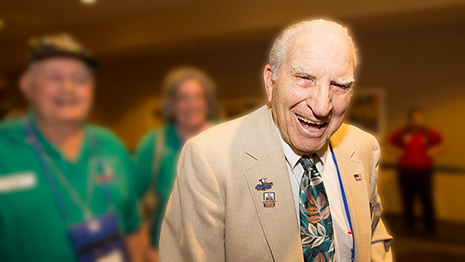 ARLINGTON, Texas - For six decades, John Simanella of Middleburg Heights, Ohio, has been a staple at the United States Bowling Congress Convention, a nearly flawless participation streak that allowed him to share his passion for the sport, while representing the Cleveland-area and Ohio bowling communities.

He even has been described by USBC Convention organizers and staff as a symbol of the event over the last decade, proudly welcoming delegates to the Convention floor and excitedly celebrating the countdown to his 60th appearance at the event, which happened in 2019.

Sadly, when the virtual 2021 USBC Convention gets underway April 26, Simanella's beaming smile will be noticeably absent from the computer screens of the Convention attendees. He died Friday at age 97.

A 1992 inductee into the Greater Cleveland Bowling Association Hall of Fame and a member of the 1997 Ohio State USBC Hall of Fame class in the meritorious service category, Simanella might be best known for his dedication to the future of the sport.

He spent countless hours teaching bowling as part of the local college curriculum, and his knowledge forever has been immortalized in a book he wrote called "Simplified Bowling," which can be found on BOWL.com.

Anytime the Professional Bowlers Association Tour visited Ohio, you could find Simanella there, volunteering to help with the event.

Simanella also spent time as an ambassador for In-School Bowling and doing all he could to make sure Ohio's youth knew about the sport, often before they even stepped foot in a bowling center. Among his successes in youth bowling was creating Junior Bowling Day in the Cleveland area.

Since the 1960s, Simanella served a variety of roles for the Greater Cleveland Bowling Association and Ohio State USBC, from committee-level positions to chairman roles to serving as president at each level, lastly as Ohio State BA President in 2003 and 2004.

His service to the Greater Cleveland BA and Cleveland USBC spanned more than 50 years.

Simanella also was a great competitor, with a high game of 300 and 48 appearances at the USBC Open Championships from 1960-2012. And, he was a family man - a father of eight and grandfather of nine.

Outside of bowling, he was a music lover, and he often shared his favorite tunes as a disc jockey at local retirement facilities and community centers.

All of the above came well after a stint in the U.S. Army Air Forces, a component of the U.S. Army, where he was a B-24 bomber gunner in World War II. After surviving 30 missions, he was able to return home to complete his college education, start a family and get to work on his bowling legacy.

Funeral services will be held at Middleburg Heights' St. Bartholomew Church and Interment Ohio Western Reserve National Cemetery on March 4, beginning at 9 a.m. local time. Friends will be received from 4 p.m.-8 p.m. at the A. Ripepi and Sons Funeral Home.
Skip Ad