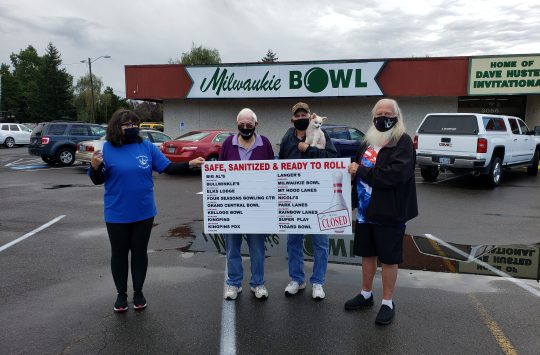 Less than two weeks after Oregon State Bowling Proprietors' Association (OSBPA) Executive Director Tawnya Zwicker quickly scrambled together and executed a plan to hold rallies at six Portland-area bowling centers pressuring Governor Kate Brown and the Oregon Health Authority to allow them to reopen, Zwicker's phone, as they say, started to "blow up."

"My phone was just going off from proprietors and bowlers," Zwicker told BJI. "You've got messenger, you've got email, and you've got text messages, phone calls."

This time, for once, the news was good. Well, for the most part.

It was the evening of Oct. 22, by which time bowling centers in the Portland metropolitan area, which comprises Multnomah, Washington and Clackamas Counties, had been languishing under a mandatory shutdown order for seven months. Finally, however, the Oregon Health Authority had just announced they could reopen. But there was a catch.

They could open, sure, but under a severe capacity restriction limiting guests to no more than 50 "including staff members," says Zwicker, who is in her sixth year as OSBPA E.D. and also operates Silver Creek Lanes in Silverton. "So you take Langer's , which is 35,000 square feet, and if you take Governor Brown's rule of one person every 35 square feet, not including lanes, they could put a thousand people in there. Yet, she's telling them they can only have 50."

Even so, after seven months of shutdown, Portland proprietors no doubt are happy to finally be opening their doors again and to see that the Oct. 11 rallies they staged, which generated front-page coverage in the state paper, The Oregonian, put state authorities on notice.

"I don't think liked the bad press," Zwicker says. "I do think we put a lot of pressure on them by holding the rallies all on one day across six locations. And then we had professional banners made up, and signage, so it looked very well organized.

"The OSBPA funded a video that recorded 12 of the centers that were closed," Zwicker adds. "We went in and we showed the centers. We thought if we could bring the centers to the governor's office and show her what we're made of, what we can provide, that that would help, because she's not coming to us. So, top-of-mind awareness was our whole mission here."

Even better, Zwicker explains, was that, "Kellogg Bowl got their country commissioner and the health department to walk through their center and they took pictures and looked at their process. I think that had a big part in getting the centers open, because they could document and they could see it. And then on their next Zoom call with the governor, they could explain, 'We've been there. We've seen it. These guys are ready.'"

Count on the effort to combat Governor Brown's 50-person capacity restriction to be just as concerted.

"We have an attorney. We're trying to fight it," Zwicker says. "Once we got their guidelines, then it's, 'Okay, how can we get this in our favor?'"

The fight to loosen the 50-person restriction will be founded on the lesson Zwicker says she has learned from fighting for the survival of her city's centers.

"We all need to work together," Zwicker says. "One person alone could not make this happen. It was all a joint effort. It was the bowlers working with the proprietors; proprietors with communication to the state. We all had a part in this, whether it was an email program, a rally, the video. These proprietors are ready to go."