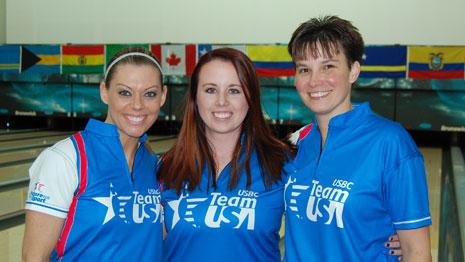 While the pieces may fit together perfectly one day, that may not be the case the next day. There's also invisible obstacles and an ever-changing environment that make it even trickier to solve.

Team USA was the first to conquer the 36-foot Beijing oil pattern this week at Bolera Departamental, claiming the gold and bronze medals in singles, but the same strategies did not work in doubles as the group failed to medal, finishing fourth, tied for fifth and 18th.

The trios event Wednesday provided a new opportunity as well as new challenges, and the group saw collective improvement on the way to the gold and bronze medals in the week's third event.

The previous trios record of 4,037 was rolled by Team USA's Diandra Asbaty, Kelly Kulick and Wendy Macpherson at the 2008 event in Santiago, Chile.

Earnest was joined in the win by Shannon O'Keefe (1,322) and left-hander Shannon Pluhowsky (1,321). The three closed the day with a 735 game to surge past Colombia, which set the bar earlier in the day with a 3,961 performance on the momentum of gold and bronze medals in doubles.

"I felt like I was throwing the ball well and executing yesterday, but I just couldn't match up and get the ball to go through the pins the right way," Earnest said. "There was some experimenting at the end, and we talked when we got done. We changed a couple surfaces pretty drastically on two balls, and one of them came into play for five of the six games today."

Clara Guerrero, who has medaled in every event this week, paced Colombia with a 1,345 total and was followed by her doubles partner Rocio Restrepo (1,327) and 2014 United States Bowling Congress Queens champion Maria Rodriguez (1,289).

The other half of the Team USA contingent was able to hold on for the bronze medal in trios with a 3,852 total. Danielle McEwan led the way with a 1,364 set and was joined by Bryanna Coté (1,279) and Missy Parkin (1,209). Parkin and Coté earned the gold and bronze medals in singles this week, respectively.

"To figure something out and see the kind of improvement we did today, really makes you feel good and gives you confidence fortomorrow," Earnest said. "Things ended really well, and I think we're in a good place. We definitely feel like we have the momentum and a good game plan going into the team event."

The United States entered the 2016 PABCON Adult Championships as the defending champion in women's doubles, trios, team, all-events and Masters, and there was a huge focus from the start on successfully defending the coveted team title.

The Team USA coaches and players have worked tirelessly this week at Bolera Departamental to find a variety of potential solutions, all with the team gold medal in mind.

That means getting all six competitors on the same page and ready to peak at the same time using the information they gathered throughout the week. According to assistant coach Chris Barnes, the team saw the low points of the week as challenging, rather than disappointing.

"What many people don't realize is that while we may be bowling on the same pattern all week, it can change each day based on how the players have adapted their equipment and strategies from the previous squad or day," Barnes said. "After we found success the first day using more surface than most teams, some went to that strategy the next day, and that changed our look. The lanes transitioned a lot quicker, and we seemed to have too much surface at that point. Then, it was just about using our resources to get back on track."

Throughout the week, whether it be between games, between squads or to get ready for the next day, Barnes and Team USA coach Bryan O'Keefe have been sanding and polishing balls and watching the various reactions for each player to find the right combination for success. The few minutes of practice before each event gave them the chance to experiment and make an educated guess.

The Team USA players have proven they are talented and versatile and have the equipment and knowledge needed to perform, but so do many of the other teams in the 15-country field this week.

Many of the 79 women have experience bowling collegiately in the United States or on the Professional Women's Bowling Association Tour the last two seasons.

"We definitely can't get by on talent alone because there's so many good players here," Barnes said. "We have to make good choices and good shots and make the right moves. We have great players who are terrific shot makers, but it is our job as coaches to be the extra eyes and help match that with the balls and physical tools each player has."

Competition at the 2016 event resumes Thursday with team competition beginning at 10 a.m. Eastern. Teams will bowl their second three games at 5 p.m. EDT, and the six-game total pinfall will determine the medalists. There are 12 complete teams in the field.

There's also a lot more on the line at the 2016 PABCON Adult Championships than just gold medals.

The top eight men's teams and top eight women's teams qualify for the combined 2017 World Championships in Kuwait. This is determined by a combined total pinfall from the following categories in each division - top four singles scores, top two doubles scores, top trios set and pinfall in team competition.

The qualifying teams on the men's side were the United States, Canada, Colombia, Venezuela, Mexico, Puerto Rico, Costa Rica and the Dominican Republic.

The women will have the same opportunity this week.

Additionally, the top two countries across the two-week stretch in Colombia will qualify for the World Games, which is held every fourth year and next will be contested in Wroclaw, Poland, in July 2017. This will be a combined pinfall total for the top two men and top two women for each country during the 24 games at the PABCON event.

The United States, Venezuela and Colombia previously qualified for the 2017 World Games through the PABCON Champion of Champions event in Mexico last April.

Visit BOWL.com/TeamUSA for more information on the Team USA program.

For complete scores from the PABCON Adult Championships, visit Pabcon.org.

Founded in 1895, today USBC and its 2,500 state and local associations proudly serve more than a million members. USBC is headquartered in Arlington, Texas, working toward a future for the sport. The online home for USBC is BOWL.com.