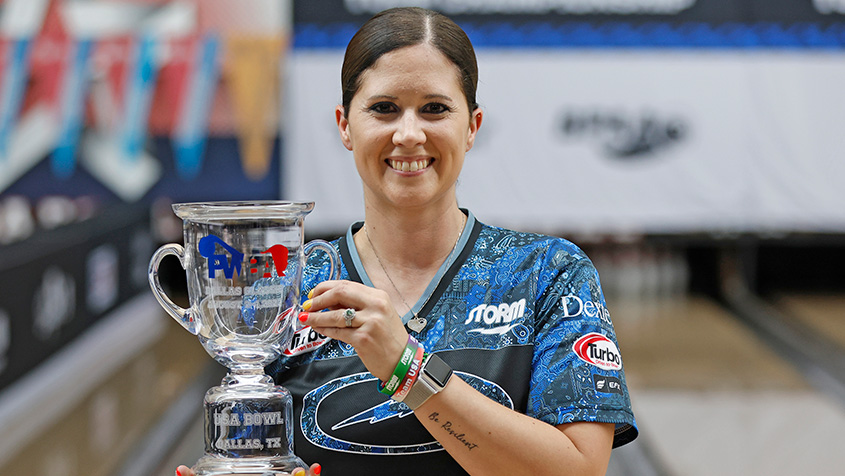 DALLAS - Bryanna Coté of Tucson, Arizona, trusted her judgment and stayed patient on a demanding oil pattern to secure her second title of the 2022 Professional Women's Bowling Association Tour season Thursday at the PWBA Dallas Classic.

Coté entered Thursday's stepladder finals as the top seed after posting a 9-3 record in match play on the 36-foot oil pattern being used at the Dallas Classic. The 36-year-old right-hander also was the top qualifier at the event.

Although she led the tournament by more than 100 pins after 24 games, Coté started the title match with a bowling ball she had not used during the event. The decision helped her claim her fourth career PWBA Tour title.

"Something told me to try this one from way in on the practice pair to see if it did the right things, and it did," Coté said. "It was one of those gut feelings, and you can't be afraid to make those decisions. Sometimes it pays off and sometimes it doesn't, but I think you learn more about yourself if you make those decisions, commit to it and see what happens."

Coté's run in the title match started slow, as she was unable to strike in her first six frames, which included a 2-8-10 split and open frame in the second. Noreiks, who had won her first three matches in the stepladder to advance, also had an open in the second and no strikes through four frames.

Noreiks doubled in the fifth and sixth frames to take the lead, and the three-time PWBA Tour champion made it three in a row with a Brooklyn strike in the seventh.

Even though the strikes had not fallen for Coté, she felt her game plan was in place and was happy to be executing well and filling frames.

"The left lane looked really tricky, but I finally got to a position where I felt pretty confident on both lanes," said Coté, who made her fifth championship-round appearance of 2022. "I knew I could hit the pocket, and it was going to be whether or not the pins would carry. I made my spares, and because of how hard they were, that helped keep me in the game."

The patience with the new ball paid off for Coté in the seventh as she started her own string of three consecutive strikes to even the match and set up the final frame.

A spare in the ninth frame from Noreiks meant Coté could not be shut out. Noreiks followed with a 4-6-7 split and open in the 10th, allowing Coté the opportunity to collect the win with a nine count on her next delivery. She toppled nine pins, leaving the 10 pin standing, to secure the first of three tournaments at the Dallas Classic Series.

Coté became the first athlete to win multiple titles in the 2022 season with her victory Thursday. Her first win of the year took place at the PWBA BVL Classic in June.

The win marks the first time she has won two titles in a season, but the ability to navigate the challenging lane conditions as the top seed is the biggest thing she'll take forward for the rest of the week at USA Bowl.

"You can watch as much as you want, but there's so much that happens to the lanes," said Coté, who finished as the runner-up at the 2022 PWBA Long Island Classic after earning the top seed. "You really get a lot of information in those first couple matches, and I think winning from the No. 1 seed is pretty difficult. Winning twice during the same season also is very difficult on tour, so being able to tackle both of those in one shot really gives me a boost of confidence, knowing I can make 10 really good shots when they're tough. But, I have to switch gears for the second event. I have a long week ahead, and a major at the end of the week that I'm looking forward to."

Noreiks, the 2022 United States Bowling Congress Queens champion, advanced to the title match with a win over Shannon O'Keefe of Shiloh, Illinois, 193-147. Noreiks stayed clean during the semifinal, while four splits slowed down O'Keefe, who was looking for her second win of 2022 and 16th career title.

Noreiks posted a 268-225 win over seven-time PWBA Tour champion Danielle McEwan of Stony Point, New York, for her second victory in the stepladder. Noreiks struck on nine of her first 10 deliveries.

Thursday's opening match came down to the final frame as Noreiks faced Colombia's Clara Guerrero. Noreiks rolled three strikes in her 10th frame to force Guerrero, the 2016 PWBA Players Championship winner, to strike on her first delivery for the opportunity to advance. Guerrero left a 10 pin, however, to finish fifth, 195-190.

The Dallas Classic featured 12 games of qualifying Wednesday to determine the top 12 players for round-robin match play Thursday. Total pinfall, including bonus pins, for 24 games determined the five finalists for the stepladder.

Competition at USA Bowl will continue Friday at 11 a.m. Eastern for the Pepsi Classic. The Pepsi Classic will feature the same format, with the finals taking place Saturday on BowlTV at 8 p.m. Eastern.

The combined qualifying totals for the Dallas Classic and Pepsi Classic (24 games) will determine the 24 athletes advancing to the Tour Championship.

Pinfall will drop at the beginning of the Tour Championship, with all advancers bowling three eight-game blocks of round-robin match play Sunday and Monday. The top five athletes, based on total pinfall and bonus pins, will advance to Tuesday's stepladder finals.

The finals of the Tour Championship will be broadcast Tuesday at 7 p.m. Eastern on CBS Sports Network. The winner will earn the $50,000 top prize.
Skip Ad