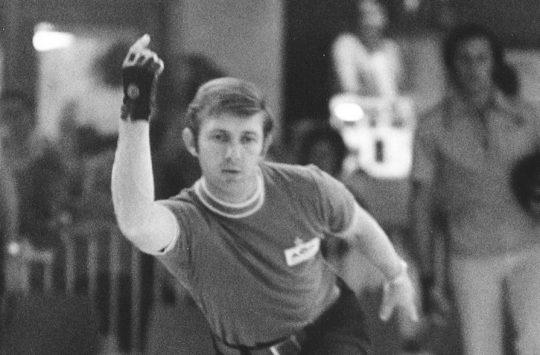 Ritger’s Reminiscence: Looking Back at the Top Moment in PBA Tour history

In late 2018, 20-time PBA Tour champion and bowling coaching legend Dick Ritger, who died Aug. 27 at age 81, spoke with Bowlers Journal International Editor Gianmarc Manzione about having a front-row seat to Johnson’s 299 as his opponent in the title match of the 1970 PBA Firestone Tournament of Champions, which was voted #1 in the PBA's 60 Most Memorable Moments poll in 2018. He still remembered vividly the moment he picked Johnson up off the ground following his final shot. And a lot more. Here is that conversation. . .

As the guy who finished runner-up, you had a front-row seat to the moment that was voted #1 on the PBA’s 60 Greatest moments list this year, which was Don Johnson’s 299 in the title match of the 1970 Firestone. You basically scraped Johnson off the floor after he collapsed following his famous final shot. Looking back on that experience now, what stands out the most for you?

The fact that Don didn’t carry that 10-pin, because it was for a $10,000 bonus plus a new . For us in bowling at that time, that was a lot of money value. I really felt sorry for Don, because he got that close and then didn’t get the results. When he released that last shot I thought, ‘Wow, that is a really good shot.’ But the speed might have been a just a little off, and that’s why he wrapped the 6 around the 10. I went to pick him up after he collapsed to the ground, and I don’t remember if I said anything, but I just felt so bad for him.

I chuckled over this one sentence in Mort Luby Jr.’s story when he was talking about your physical appearance on the 1970 Firestone show, and he wrote, ‘Ritger wore bright gold bowling shoes and a knit jacket that made him look like a big-game hunter from an old Stewart Granger movie.”

The gold shoes were shoes from before I got on the tour when we bowled on a team in Milwaukee and the sponsor bought gold shoes for all the bowlers on that team. So, those were my comfortable shoes. I kept wearing them after Milwaukee and I went out on the tour. I wore those everywhere all the time. The jacket, that kind of shirt, I bought special for that show. It was just a different type of look. I thought, ‘Well, I better look different than just the normal league bowler here.’

You and Johnson threw a combined 12 consecutive strikes to open that title match. That must have been quite the adrenaline rush for you, Dick.

It was, but the point is that when your opponent is doing very well you just know that you have to try to match it and stay even as long as you can to have an opportunity to win the game. Once I broke the string when I left that solid 4-pin, I knew inside myself that Don was going to keep striking because he was really locked in. We both were, to a point.

Don had an unbelievable run in the Firestone. Between 1967 and 1971, he made the show five years straight, finishing runner-up twice and of course winning in 1970. Why do you think he was nearly impossible to beat at Riviera Lanes during that stretch of time?

I think his game, his style and his release, fit the surface of the lanes there. But, he still had great skill, and he just seemed to perform better under the pressure of a big tournament.

Billy Welu kept mentioning throughout the telecast that, figuratively, the weight of the bowling ball must have been getting awfully heavy for the bowlers given the pressure of the moment.

Well, you don’t feel the pressure, but you do feel that it is something different, because, at the time, that was such a big tournament. It was basically a ‘major major.’

For all of your praise of Johnson’s abilities, which obviously were tremendous, Mort Luby Jr.’s story about the event in the May 1970 issue of BJI notes that Johnson himself spoke very modestly about his own abilities. Was that the Don Johnson you knew?

Absolutely. He was a very soft-spoken type of guy. He never bragged about how good he was. He just kind of quietly went about doing his job, and he was very good at doing it.

How tough was it for you to shoot 768 in your three matches on that 1970 Firestone show, including 268 in the title match of the richest tournament on tour, and lose anyway?

Well, that’s the sport. It’s just like any other sport. You might have a good day in your sport, but somebody else still beats you because they were better at the time. I did the best I could do, but at the 1970 Firestone, Don was just better. You just have to accept that.

The atmosphere of the Firestone was extraordinary; there was so much demand for tickets to that 1970 show that scalpers, in 1970, were asking for $25 per ticket. I don’t think anyone today could imagine that many fans scrambling to dish out $25 a ticket to get in the door. What was it about the Firestone, and about that era, that created such an aura around that tournament?

Well, back then, bowling in general was that popular, and after Eddie Elias got the PBA going, from the first day of qualifying you would walk in and know it was a very different thing from just bowling league. To us, and to people who came to watch it, it was a major sport. It was major to them because that was their sport as spectators. They were glad to be around it. It’s just like if I could go to a Green Bay Packer game today and be right on the field and watch and intermingle, it would be an honor for me to be able to do that because I’m a fan or professional football and especially the Packers. To get that close to the athletes would be fantastic. That’s the way it was back then; people could walk into the bowling center on the first day of qualifying and rub elbows with their favorite athlete at a time when we were on network TV every week.

Why did Johnson quit the tour in 1978? Did he just go into coaching at that point like you did?

Every athlete in every major sport knows there’s a time when you can’t perform at the level you once did, and when that starts to disappear then you know it’s time to say, ‘OK, I had a great run. Now it’s time to do something else in life.’ I think he understood that.