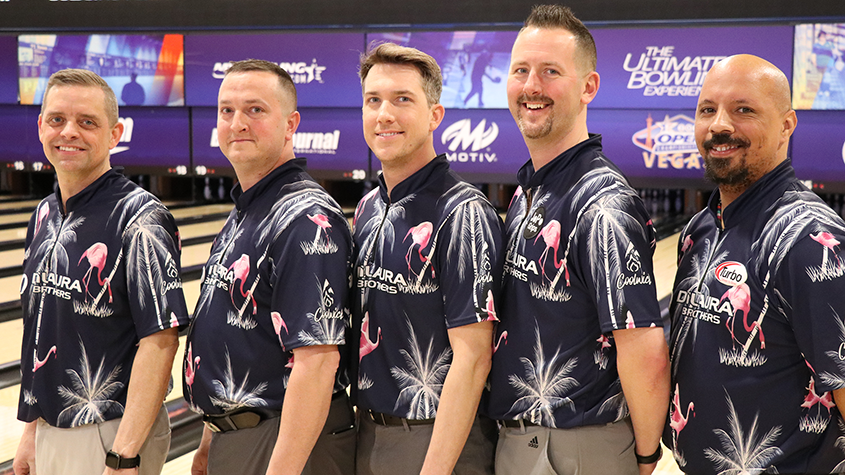 LAS VEGAS - For the second time in five days, the Team All-Events record has fallen at the United States Bowling Congress Open Championships.

The members of DiLaura Brothers 1 of Clinton Township, Michigan, averaged more than 235 as a team over 45 games and two different oil patterns on Wednesday and Thursday at the South Point Bowling Plaza to finish with a record score of 10,585.

Mento Produce of Baldwinsville, New York, had claimed the lead at the 2022 event and surpassed the longest-standing scoring record Saturday with a 10,444 total. Pollard's Bowl of Versailles, Indiana, had held the mark for 26 years after rolling 10,425 at the 1996 USBC Open Championships.

The team rewrote the Regular Division standings at the 2022 event over two days, with Sparks now sitting in the top four in each discipline at the Open Championships.

DiLaura Brothers 1 just missed the Regular Team lead Wednesday, moving into second place with a 3,468 total. Sparks and Lang took over third place in Regular Doubles on Thursday with 1,455, while Kelley and VanHecke are eighth with 1,414.

In Regular Singles, both Sparks and VanHecke had the chance to take the lead heading into the final frame, before settling into fourth and fifth place with 771 and 770, respectively.

Sparks also is second in Regular All-Events, while Lang is fifth.

Wednesday's run at the team lead came down to the final frame, as Sparks stepped up with the chance to double to get DiLaura Brothers 1 to the top of the leaderboard. His first delivery resulted in a 10 pin, ending the push toward the top spot.

Instead of dwelling on what could have been, Lang took the opportunity to bring the team together looking ahead to Thursday.

"There are 30 pins you can find in that game, and it shouldn't have come down to that, but we still had a chance in the 10th," said Lang, who won Regular Team in 1997 and Team All-Events in 1999. "Ronnie had the chance to take the lead with a double, and there's nobody in the world I'd rather have in the anchor spot. He aced it and rang a 10. It was awful. But, I gathered all four of them right after and said we have to look at the big picture. We needed to refocus and come in ready for the next day."

The team responded Thursday by posting a 3,525 effort in doubles and 3,592 performance in singles.

Lang's wins at the Open Championships came in his fourth and sixth tournament appearances, when he was the young upstart competing with a group of talented and experienced players.

Now in his 28th consecutive appearance at the event, the roles have changed, and he's offering his experience to help his teammates perform at their best.

"Jay really did an awesome job with the composure of our team," said Sparks, who won Regular Singles in El Paso, Texas, in 2015 with a 793 series. "Our guys are coming out here and giving their all, and you can see the emotions. They're tough on themselves, and he did a great job just saying to relax and regroup. When they would throw a good one, I would let them know. If you're going to beat yourself up, you have to be able to pat yourself on the back, too."

The group felt confident in its planning heading into competition this week, and the communication and camaraderie among the several DiLaura Brothers teams helped bring the group even closer at the Bowling Plaza. Several family members for the team were in attendance and competing, too, making the moment even more special.

The team will leave Las Vegas with the lead and record, but they know the wait to see if their score is enough will have its ups and downs. If the score can hold, however, the rollercoaster to the final ball on July 18 will be worth every bump along the way.

The 2022 Open Championships kicked off March 12, and the 118th edition will run for 129 consecutive days.

"There's a lot of score out there, and they are playable, so this wait is going to be hard," Lang said. "For some of these guys to walk out with a chance to win their first, though, is everything. They're so great, and they want it so bad. I love bowling with these guys."