Don Johnson Deserved an A+ in Reading 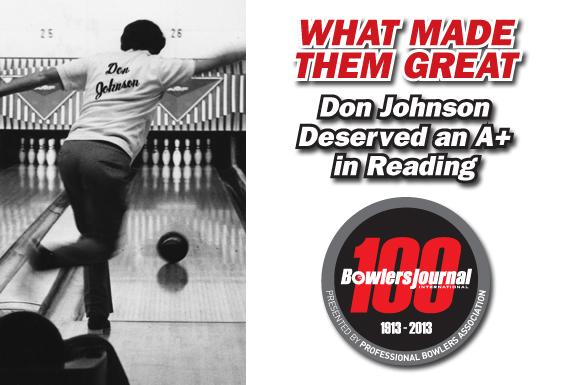 IN 1971 AND 1972, he is, inarguably, the world’s greatest bowler. He is tenpin royalty. You picture him, off the lanes, with diamonds adorning stubby fingers, and his Rolls Royce illegally parked outside the bowling center, the driver passing the time by reading a comic book in the front seat.

Guys leap to light his cigarettes. He is memorizing lines for a commercial, dictating a book, getting a manicure, and instructing an assistant to reserve a table at Morton’s Steak House for dinner. The president of the Columbia bowling ball company is on hold, hoping to have just a moment to set up an appointment. Meanwhile, two sales people for competing accessory companies are cooling their heels, waiting for the opportunity to ask him to endorse their products. For a very generous fee, of course.

It is before the dawn of cable, and professional bowlers are the stars of Saturday afternoon television. The best of the best, the superstars, are in demand. Everyone wants a piece of them, and it would be perfectly understandable if they were completely insufferable.

Then you meet Don Johnson, the king of bowling in ’71 and ’72, and arguably the best in the world from 1965 to 1975. You are surprised to discover that he answers his own phone. He clips his nails with a drugstore clipper. His haircut: more bunkhouse than salon. His clothes: far from Savile Row; more like Kmart blue light special. All in all, a guy who’s much better suited for a Grant Wood painting than a Jim Murray or a Red Smith column.

Don Johnson was American Gothic to the collar button. You’d meet him, and you were tempted to inquire, “All right, Don, what did you do with the pitchfork?” You could smell the hay if you closed your eyes.

He looked like the kind of guy you’d get to guess which walnut shell had the pea under it. He was as homespun as calico, as small town as a volunteer fire department. He didn’t juggle oil wells or cattle deals or tax shelters.

The eyes were a seemingly guileless blue, and his conversation was sprinkled with, “Oh my goodness!” and, “Gracious!” You knew he could never figure out how the magician sawed the lady in half, or pulled the rabbit out of the hat. They ran carnivals for guys like this. You were sure he’d buy a watch from an 8th Avenue auctioneer, or a vegetable slicer from a sidewalk pitchman.

But looks and speech can be deceiving. And in Don Johnson’s case, they were totally deceiving.

This was a man who could “read” a bowling lane like no other, and make the right adjustments at the right time — this at a time when lane patterns had to be found and figured out, not merely downloaded.

Don had an uncanny ability to adjust his hand release, change his line and find a path to the pocket far sooner than his fellow competitors on the PBA Tour. That’s what put him at the top of the game for so many years.

Most bowling fans like to take you back to the 1970 Firestone Tournament of Champions at Riviera Lanes in Akron, Ohio, and the image of Don Johnson sprawled on the approach after a stubborn 10-pin kept him from shooting 300 on the finals telecast.

I, on the other hand, like to go back to the 1971 Brunswick World Open for a truer view of Don’s talents. With eight games to go, he was buried in the lower third of the 24-man match play field. For any other bowler, this would be a time to simply go through the motions, collect his check, and pack the car for the drive to the next tournament.

But Don Johnson was no ordinary bowler. During those last eight games, he averaged 250-plus to vault from also-ran to the No. 2 spot for the stepladder finals.

In these days of steroid-laced bowling balls and manicured bowling lanes, a 250 average for eight games isn’t a real big thing. At that time, however, it was almost unthinkable. No other bowler in that group of two dozen averaged over 211 per game. In other words, he out-averaged 23 of the greatest bowlers of that time by 40 pins per game.

As a close observer of Johnson’s run in that block, I watched Don play one lane out by the gutter, another over the third arrow, and another over the fourth arrow. He changed his speed, changed his hand release, and struck after sending his ball over parts of the lanes that no other bowler dared to try.

That was Don Johnson at his greatest. He went on to win that tournament in an exciting final match against Larry Laub that went to extra frames.

Don never crept through a block of bowling in his life. He shot 250 or 180 with the same boyish enthusiasm. He never ran around tinkering with his swing or begging for an explanation for a bad block. When the bowling center knocked him down, he got up swinging, like Ali.

He stepped up on the approach as if he intended to arrest it. Hands on hips, and a confident, almost swaggering, gait of a Texas Ranger rounding up rustlers.

As Don wound down his career, he went into coaching, enabling many to appreciate the sport of bowling at a higher level of efficiency. He was a great coach, and his love for bowling was evident in every student that had the opportunity to tap his knowledge.

I only hope that those students really appreciate the greatness that they were around.