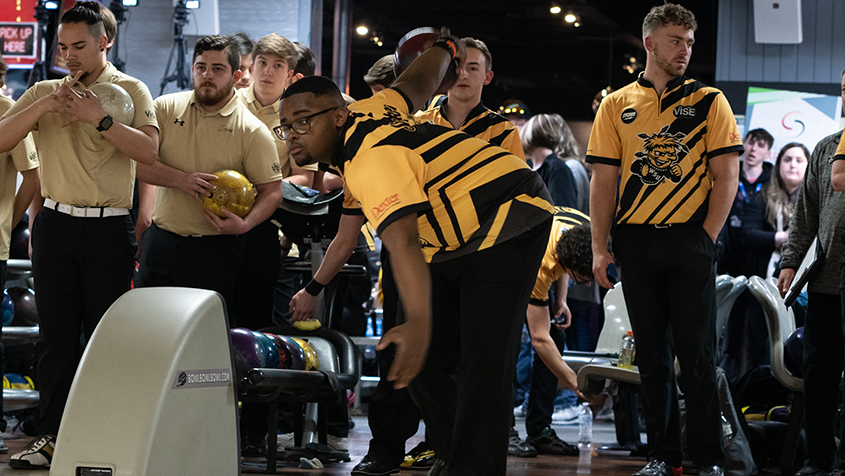 ADDISON, Ill. - The Wichita State men and women will have the chance to defend their titles at the 2022 Intercollegiate Team Championships at Stardust Bowl.

In the men's title match, the Shockers will face Wisconsin-Whitewater, while the women will face Stephen F. Austin in their quests to repeat as champions.

The title matches will be best-of-five Baker matches.

The Wichita State men went undefeated in match play Thursday and Friday to advance to the finals. The Shockers dispatched William Penn, 4-2, to make their second consecutive trip to the finals and 23rd trip overall to the title tilt. A win on Saturday would be the 13th national championship for the men's program.

Alec Keplinger, the 2022 National Collegiate Bowling Coaches Association Most Valuable Player, said the two experiences are a little different, because they had more fan support in the crowd this year, which increased the team's energy levels. But, at the end of the day, the Shockers did what they had to do.

"This makes it all worth it," Keplinger said. "We came here. We did what we were supposed to do, and now we're back on the show to defend our title."

Wichita State men's coach Rick Steelsmith helped Wichita State to an ITC title in 1987 and is one of the rare coaches who has won in both roles. He took over for the legendary Gordon Vadakin during the 2019-2020 season and has seen immediate results, and he knows exactly what the players are feeling.

"It's been a ton of fun," Steelsmith said. "It kind of brings me back to my college days a little bit, which in my mind was the most fun bowling I've ever done in my life. It's been fun to kind of rekindle that. Thirty-five years ago, I was them. So, I kind of know where they're at, what they're wanting, what their goals are and what their dreams are. I know how bad I wanted it back then, so I try to do what I can to help them achieve what they want to achieve."

Wisconsin-Whitewater needed all seven games to make their dreams a reality after defeating Indiana Tech to make their first career appearance in the finals of the ITC.

The Warhawks lost to Indiana Tech in Round 5 to head to the Elimination Bracket, but after a 4-2 win over McKendree, they again met Indiana Tech in the semifinals. Wisconsin-Whitewater needed to defeat the Warriors in two consecutive matches to advance.

After winning the match in Round 7 against Indiana Tech, 4-2, the veteran Wisconsin-Whitewater squad jumped out to a 3-0 lead in Round 8. The young Indiana Tech team battled back to tie the match at 3-3.

Wisconsin-Whitewater would like to send their head coach out in grand fashion. Shawn Wochner, who has coached the Warhawks for 12 seasons, will coach his final match Saturday and was finally able to put the pieces together for a magical run.

"It's been all about the guys," said Wochner, who, as a player, helped Western Illinois to the 2001 ITC title. "I've always wanted a team that I coached to have the same experience that I had as a player. It's something that lives with you forever. Our Western (Illinois) guys still get together every summer 20-plus years later, and all I've ever wanted was a team to have that feeling of success and completion."

"It's an amazing feeling knowing all the hard work you put in throughout the year is finally coming together and the team is competing for a national championship," said Thomas, a senior. "This is probably the best feeling I've ever had in bowling for sure."

In the women's division, Wichita State needed the extra match to advance to the finals after Sam Houston State knocked off the Shockers, 4-2, in Round 7. With everything on the line, Wichita State remained calm and trusted their championship instincts gained from a season ago to prevail in Round 8, 4-2. The program will look for its 11th national title for the women's program on Saturday.

Senior Addie Herzberg knows the team is confident and has a good chance of repeating.

"I'm over the moon," Herzberg said. "I feel very powerful. Our team is so confident in who we are. We know we can do it, which just brings us more confidence. It doesn't feel like there is a target on our back because we won last year, because we know we can do it. We're champions. So, we're going to go into it knowing that if we do what we need to do, we'll become champions again."

Similar to Steelsmith, Wichita State's Holly Harris took over for longtime women's coach Mark Lewis at the start of the 2019-2020 season. For Harris, this return trip is more about the players and their triumphs over adversity during the season.

"I'm just so proud of them," Harris said. "It's been a challenging year and things haven't always fallen our way, but to persevere through all of that and get here and really come together is special. To watch them work together during the last two days has been so special. I'm thrilled. I'm not a mom, but if I had to imagine what a proud mom feels like, I think that's how I feel."

Stephen F. Austin remained undefeated throughout the event after defeating Pikeville, 4-2, on Friday night to advance to the finals. The month of April has been special for the Ladyjacks, after winning the NCAA Arlington Regional to advance to the final four of the NCAA Women's Bowling Championship. The squad parlayed that into a runner-up finish in the title match against McKendree.

Now, the two-time NCAA champions will make a run at their first ITC title. It's a close-knit group, led by senior Carlene Beyer.

"This team means everything to me," Beyer said. "We're a family. Today proved that we have each other's back, and no matter what happens, we're there for each other. This is the first time SFA has ever made an ITC TV show, and getting this one would mean so much. We can do this. I have so much faith in us."

Coach Amber Lemke's squad has improved as the season has gone on, and despite the loss in the NCAA finals, she and husband/assistant coach Steve Lemke made sure their players understood the gains they've made and how proud they are of them.

"I think making two national championship shows in one year is pretty awesome," Lemke said. "We were asked if any of us watched the show (NCAA) last week, and the resounding response was no, because we aren't ready. But, we (Steve and I) did tell them how extremely proud we were of them for being in that position. I think we took what we learned and applied it when we got here. We're performing at a high level right now, and we just made sure they knew that one loss doesn't define us as a team. We reset, started over and we're after another one."

The 2022 event kicked off Thursday, with a 24-game Baker block determining seeding for the bracket for the top 16 men's and 16 women's teams in the country. The opening rounds of match play took place Thursday, with all teams returning Friday to Stardust Bowl.

Teams qualified for the ITC through four sectional qualifiers held throughout the country in April. Teams had to place in the top four in their respective sectional to advance.
Skip Ad