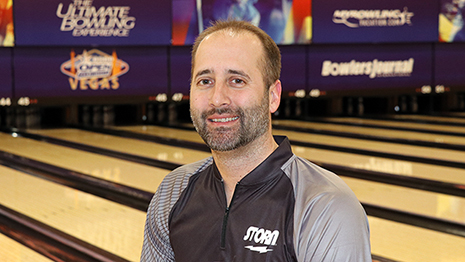 It took some time for the 37-year-old right-hander to get comfortable on the biggest stage in bowling, but everything fell into place for the final game of his debut set. His 300 was the fourth of the 2022 tournament and second during team competition.

Through the first two games of his USBC Open Championships career, the event certainly delivered the challenge Miller was told to expect, and he posted scores of 125 and 156, which included five total strikes.

Now, he'll go from raising his hand in the Squad Room as a first-time participant to being recognized each year as a celebrity.

"I don't really remember what I was thinking as the game went on, but I can say for sure that on the last two shots, I was shaking pretty badly," Miller said. "Somehow, I pulled it together, and it was an amazing experience."

Miller, who has been bowling for four years, switched to two-handed two years ago at the suggestion of his coach, who thought it might better suit his style. Miller said prior to Monday night, his high game was 269, and the most strikes he'd ever had to start a game was six.

His memorable performance came with a ball he purchased on-site at the South Point Bowling Plaza and included a couple of fortunate breaks - a messenger that took out the 6 and 10 pin in the eighth frame and a Brooklyn strike on his 11th shot - but he was able to make the right adjustments along the way and settle his nerves in the moment.

"From what I've heard, a lot of people who get 300 have a lucky shot in there, and I was fortunate to get a couple breaks at the end," Miller said. "On the last two shots, one I was pretty straight on, and the last one, I decided to throw it out a little bit more, and that was a much better shot."

Miller's energy and good fortunate extended to the rest of his team, and three of the five team members finished with their highest games of the night.

The surge helped River Card Casino to a 1,117 finale, the second-highest team game in the five-event history of the Standard Division, and a 2,857 total, which is just outside the top 10 in the Standard Team standings this year. The group opened with games of 822 and 918.

The highest game in Standard competition was a 1,133 effort that helped Him Bowling Events 7 to a tie for second place at the South Point Bowling Plaza in 2021.

The group Miller bowled with this year was comprised of competitors he bowls league with at Watertown's 12-lane Tommy's Bowling Lanes. Those who had been to the event before made sure he knew what to expect from the venue and the lanes.

"They said it would be humbling and that the shot would be complicated to figure out," Miller said. "They told me to expect to shoot some lower scores but that it would be an incredible experience. I found out early on about the scores, then I just started finding my shot and found a line that worked for me."

While his teammates were accurate in their description of the playing environment at the Open Championships, the one-of-a-kind venue usually is something bowlers often have to see to believe.

"South Point is just amazing," Miller said. "Coming from 12 lanes into South Point, where you're looking at 120 lanes, is unlike anything else. It's top-notch. I asked a lot of questions during this whole process and wanted to learn everything I could, then to get here and see it and march out was a neat experience. I planned to have fun with it, no matter how the bowling part went."

Individually, Miller competed in the Classified Division this year, which is for bowlers with entering averages of 155 and below.

His goal simply was to bowl a 200 game, but that actually will have to wait until his sophomore campaign in 2023, as his other eight games were below his target number.

Miller finished his first Open Championships with sets of 581 in team, 476 in singles and 411 in doubles for a 1,468 total. Ronald Hilliard of Lancaster, California, leads Classified Singles and Classified All-Events with 665 and 1,824, respectively.