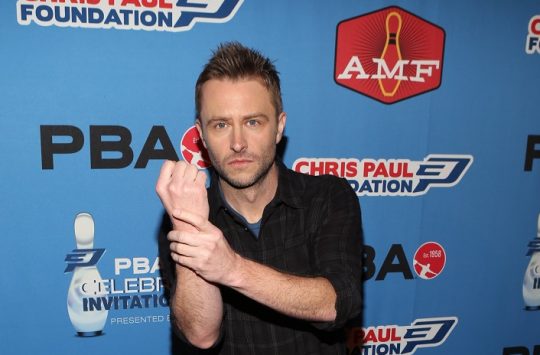 Chris Hardwick, the son of 18-time PBA Tour champion Billy who has bowled two CP3 PBA Celebrity Invitational shows and in 2013 was designated the “Team Owner” of the PBA League’s Silver Lake Atom Splitters, tearfully resumed his hosting duties for AMC’s post-show TV series “Talking Dead” last night after seeing his career flash before his eyes in June when ex-girlfriend Chloe Dykstra alleged that he had subjected her to sexual assault and other abuses.

Dykstra made those allegations, though without explicitly naming Hardwick, in an essay published by Medium on June 14. Reaction, as it has been in so many prior #MeToo cases, was swift. Within 24 hours, Nerdist, the platform he co-founded and developed into a multifaceted media empire reaching more than 10 million monthly visitors on Youtube and elsewhere, scrubbed all references to Hardwick from its website. He was removed from two panels at Comic Con 2018. AMC announced that “Talking Dead” would be pulled. One Twitter user captured the social media backlash Hardwick faced with a tweet to Hardwick using the #MeToo hashtag that said, “You deserve to lose everything you have built.”

Five weeks later, however, AMC had restored Hardwick to his “Talking Dead” hosting duties after conducting an internal investigation and announcing in part that, "Given the information available to us after a very careful review … we believe returning Chris to work is the appropriate step.” NBC then brought him back to host “The Wall” and as a guest host on “America’s Got Talent.” The comedian’s vindication appeared to have set in with whiplash-inducing speed, leaving some wondering whether his case had created a moment of pause and reflection within the #MeToo movement.

Dan Recht, a Denver-based defense attorney for 45 years who wrote a March 9 column for the Denver Post titled, “The #MeToo Movement’s Due Process Problem,” told BJI that, “AMC is to be applauded. They, in a sense, went out on a limb by taking Chris Hardwick back. It was the right thing to do after their investigation. But, other companies aren’t so objective about things because they’re scared of this whole cascading movement.”

Recht advised that more companies should adopt processes for adjudicating allegations of sexual misconduct against an employee “that are inherently fair and aren’t prejudiced against someone that’s accused” because those wrongfully accused “may stand a very good chance of wearing that scarlet letter forever. They might not go to jail, but they can’t get work, people are aware of this false reputation.”

Vanessa Grigoriadis, author of “Blurred Lines: Rethinking Sex, Power & Consent on Campus,” cautioned against interpreting Hardwick’s case as a “setback” for a #MeToo movement that indeed has brought down powerful men who used their position of authority to commit crimes of sexual violence against women.

“You can’t just say, ‘Well, this wasn’t true, so this whole issue is fake,’” she told BJI. “Just because some people are not credible does not mean that others are not credible.”

In his tearful return to AMC’s “Talking Dead” show last night, Hardwick, who was BJI’s Person of the Year in 2014, said, “I’m so appreciative to be standing here right now. And I want to thank you, the Walking Dead community, for all of your support these last couple of months.”

The Wrap reported on Aug. 10 that one female executive producer of the show, as well as “a handful” of other staffers, quit in protest of Hardwick’s return. Hardwick reportedly “gathered staffers in what was described as a ‘very emotional’ meeting” days before his return “to apologize for the recent turmoil.”