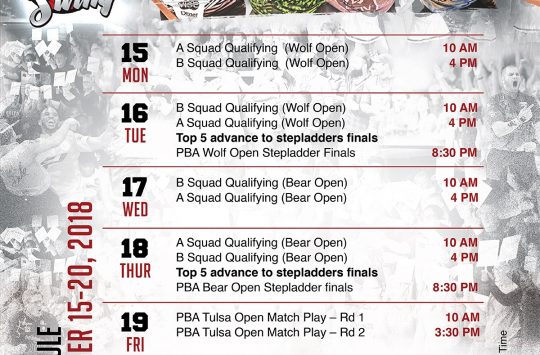 The multi-event tournament package, which will be conducted on two different PBA lane conditions, will be covered live exclusively on PBA’s online streaming service Xtra Frame on FloBowling.

The Wolf Open will be conducted on PBA’s Wolf 33-foot pattern, the Bear Open on the Bear 39-foot pattern. The 18 players who advance to the Tulsa Open match play rounds will have the added challenge of competing on a mixed condition that uses the Bear condition on the left lane and Wolf condition on the right lane. The mixedBear/Wolf oiling system also will be used for the Tulsa Open stepladder finals on Saturday, Oct. 20.

The last time the PBA Tour visited the Tulsa area was in October 2005 when 18-time PBA Tour winner Tommy Jones of Simpsonville, S.C., won the Tulsa Championship at The Lanes at Coffee Creek, defeating Wes Malott of Pflugerville, Texas, 289-248, in the title match. Both players are also entered in the Fall Swing which will feature a field of approximately 120 players representing 10 countries.

Of local interest will be Oklahoma players including 18-year-old two-hander Trey Ford III of Bartlesville and former touring player Mike Edwards of Tulsa. Ford made PBA history earlier this year by becoming the youngest player to win a PBA regional tournament at the age of 17.  He has competed in several other PBA national events with a best finish of 11th in the PBA Grand Hotel & Resort Open in July of 2017. Edwards owns one PBA Tour title which came in the IOF Foresters Bowling For Miracles Open in 1994.

Following an official practice day on Oct. 14, the FloBowling PBA Fall Swing will get underway with two Wolf Open six-game qualifying rounds on Monday and Tuesday, Oct. 15-16. After 12 games, the top five will advance to the Wolf Open stepladder finals Tuesday at 7:30 p.m. CT.

Wednesday and Thursday, Oct. 17-18, all players will bowl two more six-game qualifying rounds in the Bear Open with the top five bowling for the Bear Open title Thursday at 7:30 p.m.

Based on the combined 24-game qualifying totals from the Wolf and Bear events, the top 18 players will advance to Tulsa Open match play, which will consist of two six-game round robin match play rounds on Friday, Oct. 19 and the final six-game round on Saturday, Oct. 20. Based on combined total pinfall for 42 games, including match play bonus pins, the top five scorers will compete for the Tulsa Open title Saturday at 12:30 p.m.

Spectator admission is $10 each day including the stepladder finals on Oct. 20. Grassroots bowlers can bowl with the pros during a special practice session on Oct. 14 at 6 p.m. which will provide the opportunity to get instruction from some of the best bowlers in the world. For additional admission and Practice with the Pros entry information contact The Lanes at Coffee Creek by calling (918) 274-0400.

The Lanes at Coffee Creek, Owasso, Okla. (all times are Central)

All rounds covered live on Xtra Frame on FloBowling