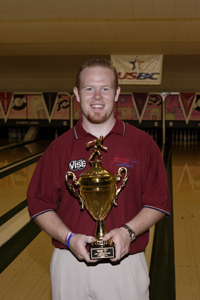 He proved why Tuesday.

Andersen, a Fremont, Calif., native, was the third left-hander to fall 3-1 to the right-handed Haggerty, who earned the top seed and a bye to the quarterfinals by being the high qualifier. He also defeated Erie Community College freshman Ryan Ciminelli, Cheektowaga, N.Y., in the quarterfinals and William Paterson junior Tom Scherrer, Holtsville, N.Y., in the semifinals.

“I had a great look at the lanes all week,” the Weimar, Calif., native said. “Taking down three lefties today was hard. Luckily, I got the breaks.”

Once of those breaks came in the eighth frame of Game 4 when a messenger pin kicked out the 10-pin – keeping Haggerty’s string of strikes in tact. It helped him stave off Andersen’s late run to hold on for the 233-209 championship clinching victory.

Haggerty started the championship match strong, striking on 8 of 11 attempts – including seven consecutive – to pull out a 244-213 victory in Game 1. Andersen evened the match with a 207-193 triumph in Game 2 before Haggerty pulled back ahead in Game 3, pulling out a 207-206 victory.

The 2003 American Bowling Congress Chuck Hall Star of Tomorrow traded strikes in a fierce match with Ciminelli, the 2004-05 NCBCA Rookie of the Year. Once he advanced, Haggerty knew he was in control of his fate.

“I knew once I beat him I had a good chance of taking down the next two, no matter who it was,” said Haggerty, a Junior Team USA member in 2004 and 2005. “That gave me a lot of momentum. I got a lot of confidence out of that match.” 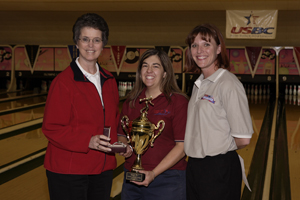 Participants bowled 12 qualifying games Monday to determine seeding for the best-of-5, single-elimination match play competition beginning 9 a.m. Tuesday. The top four seeds in each division received byes to match play’s third round, while No. 5 through No. 8 seeds received byes to the second round.