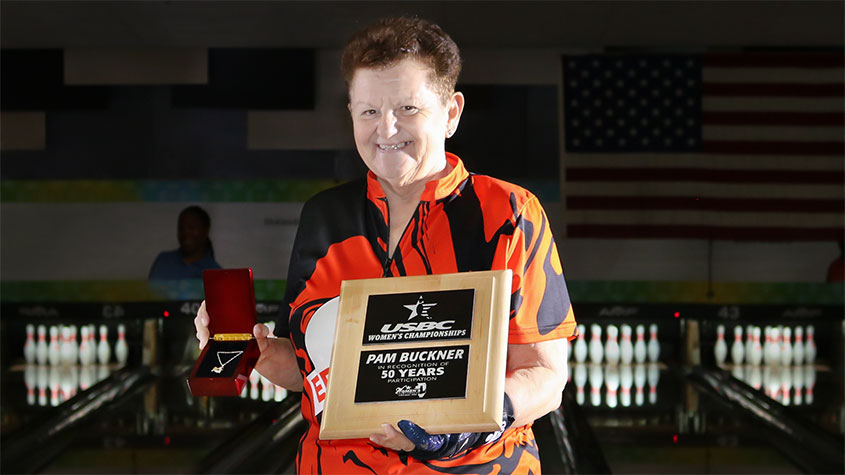 The USBC Hall of Famer received a plaque, chevron and necklace to commemorate her longevity at the event. The 75-year-old left-hander made her debut at the 1969 event in San Diego, and she now has visited 33 cities and 23 states throughout her tournament career.

Buckner exuded excitement and humility as she accepted these awards, representing her unwavering loyalty to the sport. Though she may carry several hall of fame inductions and a history with the sport worth hearing, for Buckner, there's something unique about the USBC Women's Championships that makes crossing this threshold extra special, and it goes further than the game itself.

"When you come to the tournament, you get to see people you haven't seen all year," Buckner expressed. "We're hugging and catching up on stuff, and then you get a chance to compete. I love the competition, but I love seeing my friends. They come in from everywhere."

The unique camaraderie and fellowship that emerges during the Women's Championships specifically, year after year, mirrors the values that Buckner has built upon throughout her entire professional bowling career.

As an advocate for youth bowlers, women athletes and truly just anyone she can lift up with her experience and support, it's clear that Buckner loves to interact with others and watch them grow in the sport as well.

"I love this game, and I've made so many lifelong friends because of this game," Buckner said. "You can go anywhere in the world, and if you meet another bowler, they're family. That's something about this sport that you won't see in other sports."

As the 1976 USBC Queens champion shared notable stories and successes from her career, she landed upon another reason why the Women's Championships hold a special place in her story.

"You know, it was a moment when I got into the USBC Hall of Fame back in 1990," Buckner said. "It was because my family was there right next to me. Now, my parents are gone. But, I keep coming back, just like they're here."

So, while the competition and friendships are what motivates Buckner to return year after year, her love for the Women's Championships clearly runs deeper than what you can spectate on the lanes.

"You're made to feel special (at the Women's Championships)," Buckner said. "I shouldn't be getting chills, but I am."

Buckner also may get chills in the Chicagoland area later this month, when she's inducted into the Professional Women's Bowling Association Hall of Fame in Oak Brook on May 18 in the Performance category.

She captured seven PWBA Tour titles throughout her career and was inducted as part of the 2020 class.

Visit us on Facebook at the official USBC Women's Championships page.
Skip Ad