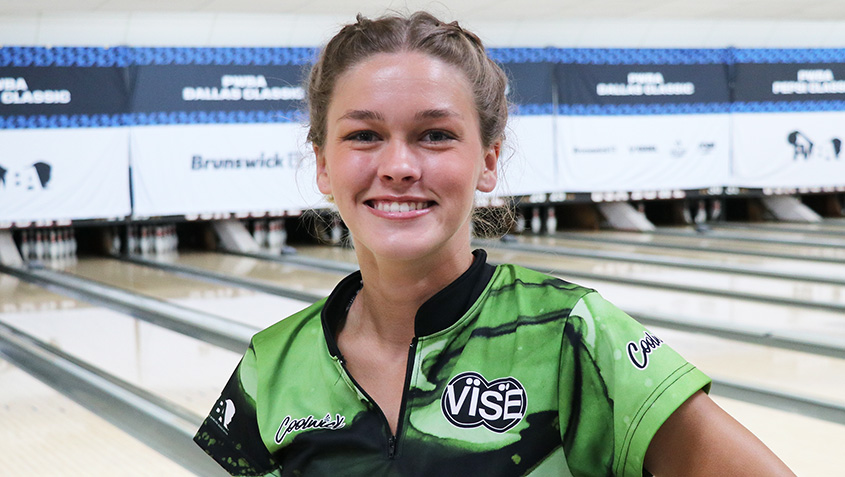 DALLAS - Hope Gramly of Aubrey, Texas, has excelled in her opportunities to compete against the top players on the Professional Women's Bowling Association Tour in 2022, and she added another strong performance Friday by leading qualifying at the PWBA Pepsi Classic.

The 22-year-old right-hander jumped from 18th place to the top of the standings during her second six-game block at USA Bowl, finishing with a 12-game score of 2,666, a 222.17 average.

Julia Bond of Aurora, Illinois, is the defending champion at the Pepsi Classic and sits in second with a 2,643 total. Danielle McEwan of Stony Point, New York, is third with 2,638, and Ukraine's Dasha Kovalova (2,636) and England's Verity Crawley (2,613) rounded out the top five.

The top 12 athletes from the 83-player field advanced to match play at the Pepsi Classic. The advancers will bowl two six-game match-play rounds, starting Saturday at 10 a.m. Eastern. Total pinfall, including bonus pins for each win in match play, will determine the five finalists for the stepladder finals.

The stepladder also will take place Saturday, beginning at 8 p.m. Eastern live at BowlTV.com. The champion will win $10,000.

Gramly has been busy on some of bowling's biggest stages since April. She started her run by helping McKendree University win the 2022 NCAA Women's Bowling Championship.

Her next national appearance took place at the United States Bowling Congress Queens in May, where she advanced to the stepladder finals as an amateur and collected a fifth-place finish, and she was able to earn her spot in match play at the U.S. Women's Open in June, finishing in 14th place.

She's stayed busy with school work over the summer as she looks to complete her master's degree, which made the majors her only stops on tour leading up to the Dallas Classic Series.

"It's definitely been a bit of a roller coaster, because there have been long breaks between tournaments for me," said Gramly, the 2021 and 2022 National Tenpin Coaches Association Division II Player of the Year. "After Queens, I didn't bowl much outside of normal practice, and then I bowled the Open and did really well. But, I didn't bowl very much until I came here. As far as placing and performance in competition, that's been a high. I've been riding that high for as long as I can, and I'm just glad it paid off today."

Bryanna Coté of Tucson, Arizona, won the Dallas Classic for her second title of the season Thursday at USA Bowl, and the Tour Championship will take place Aug. 7-9.

Gramly finished the Dallas Classic in 41st place, and she was 31 pins outside the cut at the Pepsi Classic after her first six-game block Friday with a 1,257 total.

"In the first block, I didn't handle the transition very well," Gramly said. "I didn't make a ball change when I needed to. Fortunately for me, I didn't have to make that ball change this block. I was able to stay in the same ball the whole time and kept adjusting, moving left and hooking it, which is what I do best. From that point on, it was just executing shots.

"Going into match play tomorrow, my game plan is staying the same as it was for the second block. I'm going to keep an open mind in transition and just execute shots, hit the pocket and make my spares. If I win my matches, great. If I lose, I hope I can still shoot at least 200 so I don't give away too many pins and just go from there."

In addition to advancing to match play at the Pepsi Classic, Gramly also will be part of the field for the season-ending Tour Championship after finishing qualifying in seventh place with a 4,963 total. The combined qualifying totals for the Dallas Classic and Pepsi Classic (24 games) determined the 24 athletes advancing to the third major of the season.

McEwan is the 2015 Tour Championship winner, and O'Keefe won the season-ending major in 2017 and 2019. Defending champion Shannon Pluhowsky of Dayton, Ohio, qualified in eighth with a 4,948 total, and 2018 winner Maria José Rodriguez of Colombia finished 23rd with 4,813.

Latvia's Diana Zavjalova earned the final spot at the Tour Championship with a 4,796 total, a 199.83 average.

Pinfall will drop at the beginning of the Tour Championship, with all advancers bowling three eight-game blocks of round-robin match play Sunday and Monday. The top five competitors, based on total pinfall and bonus pins, will advance to Tuesday's stepladder finals.

The finals of the Tour Championship will be broadcast Tuesday at 7 p.m. Eastern on CBS Sports Network, with the winner earning the $50,000 top prize.