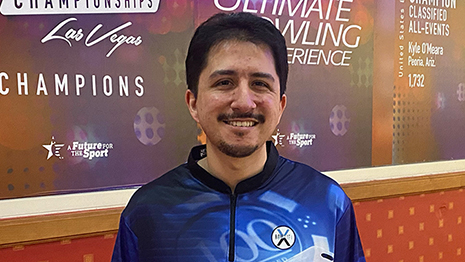 LAS VEGAS - For the first time since 2008, Michael Martinez of Cicero, Illinois, participated in the United States Bowling Congress Open Championships, and while his initial goal simply was to have an enjoyable trip with his friends and family, his focus now will shift to keeping an eye on the event's online leaderboards.

Martinez's 1,800 was the best performance of his four tournament appearances by more than 150 pins and bested Austin Eastman of Sioux Falls, South Dakota, who previously held the lead this year with 1,758.

"I had no idea I was even close to the lead," said Martinez, who made three consecutive trips to the USBC Open Championships, starting in 2006. "It's so exciting. I'm speechless. I wasn't really watching the scores. I was pretty calm bowling with my friends but still focused on bowling my best."

Going into singles Wednesday at the South Point Bowling Center, Martinez needed a 569 series to take the lead in all-events.

He opened with games of 198 and 201, before starting the final game of singles with five consecutive strikes. A few more marks and a 211 finish vaulted him into the stop spot. Barry Mortimeyer of Roseville, California, leads Classified Singles this year with 674.

Martinez admitted he never would have thought he'd be leaving Las Vegas with the chance to win an Eagle. He plans on checking the standings every day for the remaining 25 days of the tournament.

The Classified Division includes individual bowlers with entering tournament averages of 155 and below.