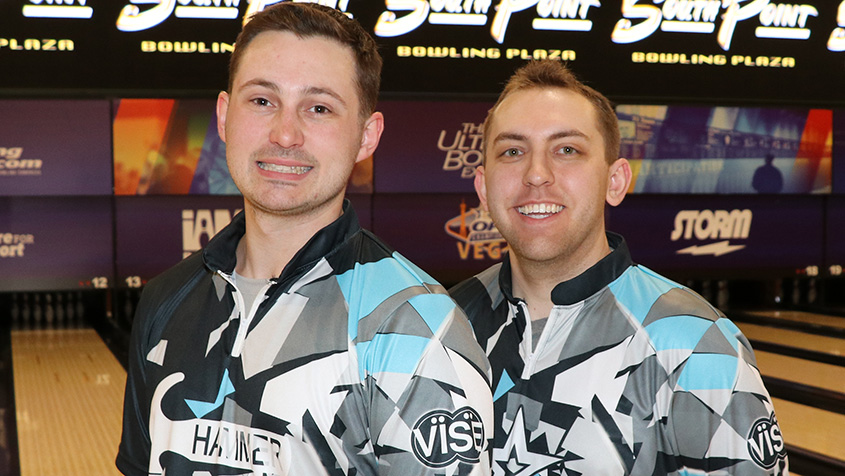 LAS VEGAS - Kyle Krol of Tinley Park, Illinois, and Kyle Damon of Orland Park, Illinois, put together 18 strikes in their final game of doubles Saturday at the 2022 United States Bowling Congress Open Championships to get to the lead in Regular Doubles.

Tony Odom of Palm Springs, California, and Nick Powanda of San Diego had held the lead in Regular Doubles since April 10 with 1,518.

Entering their final frame of doubles Saturday, both Krol and Damon were working on three consecutive strikes after recording spares in the sixth frame.

For a chance at the lead, one of them needed to double in the 10th frame, while the other needed at least the first strike and good count on the second shot.

Damon stepped up first and struck on his first two deliveries. Krol struck on his first shot and left a 10 pin on his second, which meant Damon needed at least seven pins on his fill shot to secure the outright lead. He knocked over nine pins, while Krol converted the spare.

The longtime friends knew they were close to the number but did not realize they had moved to the top of the leaderboard until they had wrapped their final frame.

"If I'm bowling, I'm trying to get as many pins as I can," said Krol, who rolled a 299 in singles at the 2017 USBC Open Championships, also held at South Point. "At that point, I knew if we could put something up, we had a chance at a top-10 finish with everything we had going on. When I saw 1,500 up there, I knew it was pretty close, but I didn't know the exact number, so I wanted us to get everything we could and stay focused on what we were doing."

Krol and Damon started their 2022 appearance at the Open Championships with a solid effort in team competition, helping Chicago's Lawn Lanes 5 into the top 20 in Regular Team with 3,321 total.

The confidence from Friday and a good look to start Saturday in doubles helped set the table for a run at the lead. Damon's perseverance through some struggles in Game 2 allowed them to have the chance at the end of the set.

"We had the ability to play a part of the lane we were really comfortable in to start," said Damon, who made his sixth tournament appearance. "I had a little struggle in the middle but was able to come back with a strong finish, and it ended up being just enough. After the 10th frame of Game 1, I moved in and the ball kind of labored. I tried to chase it in and made some good shots, but I caught some bad breaks. I made a ball change to save 190 and got kind of locked in for the last game."

Krol credited his teammate for being open to change and making the right move after three opens in his first eight frames of Game 2.

"In the beginning, his ball was just rolling fantastic," said Krol, who also made his sixth Open Championships appearance. "It was seeing the lane the right way, but unfortunately it developed a little bit and was slowing down too much in the midlane. He had to make a gutsy move if we wanted to make a run at it, and I'm very happy he did."

The initial news of taking over the lead amped the excitement for both players heading into singles at the Bowling Plaza, and it took a few frames for each to settle in.

After a 712 set in team Friday, Krol had a chance to also make a run at the lead in Regular All-Events, before settling into 11th place with 2,183. He finished singles with 684.

Damon and Krol have been friends since elementary school and bowled together during high school. They have been able to share in a lot of great moments, and they are hoping for another one at the end of the 2022 event on July 18.

"We got the lead for right now, and it gives me chills," Krol said. "We've been best friends since sixth grade. Everything just clicked, and it's great. It'll be nerve-wracking waiting to see, and it will be a very long six weeks."