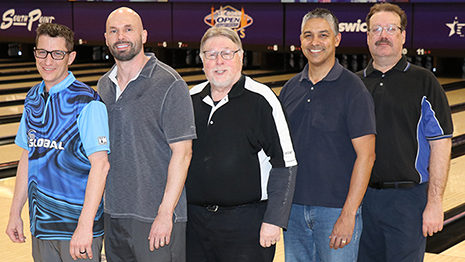 The team improved each game at the South Point Bowling Plaza, turning in scores of 1,003, 1,021 and 1,073 to cruise into the lead, while a full final frame from anchor Ronald Demco gave the quintet the highest score in the short history of the Standard Division.

With the lead well in-hand, Demco left a 7 pin on the first shot of his final frame, made the spare and then got nine on his fill ball to establish the all-time mark. The Standard Division was introduced at the 2017 USBC Open Championships and includes teams with combined entering averages of 776-875.

Cinderella Shoes of Bradley, Illinois, previously held the lead this year with 3,005, and the previous record of 3,086 belonged to Proformance Team 2 of Clermont, Florida, the 2021 Standard Team champion.

"It's early yet, and it's a long tournament, but we'll celebrate for a minute, sure," Ronald Sereyka said. "We didn't really look at the leaderboard to see how far ahead we are, but we know anyone can beat us just the same. We're definitely leaving happy, and now we'll wait and see. You never know."

The team features a wide range of experience and nearly 90 combined appearances at the Open Championships. Ronald Sereyka is the veteran of the squad with 47 trips to the event, while Surges made his tournament debut Sunday at South Point.

The new leaders are part of a nine-team group this year, organized by Oak Lawn's Joseph DiCola. It's a collection of bowlers that continues to grow, and DiCola works to make sure the averages match up to give each team the best chance to succeed.
As the veteran of the Lemont Bandits crew, Ronald's Sereyka's motivation for returning to the tournament lanes each year is multi-layered.

First, he has his sights set on becoming a member of the event's 50-Year Club. He also cherishes the opportunity to share the lanes with his son. Being able to introduce new bowlers to the history and tradition of the Open Championships also is special and rewarding.

"Usually, when we put the teams together, I take the new guy, so I can show him the ropes," Ronald Sereyka said. "This team worked well together. We went up every game, and everyone contributed. You can't win the team event unless everyone does their part, and that happened tonight."

One final back-of-mind motivation for the elder Sereyka is a shot at redemption, nearly five decades in the making.

As he recalled it, during a lower-scoring doubles event in the 1970s, his partner rolled a series in the high 700s, while his own sub-500 contribution potentially cost them the win.

"Ever since then, I'll bowl with anybody and at least guarantee we have a good time," Ronald Sereyka said. "It's nice to do well and win the money, and I always think about making up for that time. I let the guy down, and tonight, I really focused on coming through with a big game this time. I didn't let them down this time."

Doing his part Sunday, including a 265 finish, now has that redemption within reach, though the final team squad of the 2022 Open Championships won't hit the lanes until July 17.

The self-described grizzled veteran said it's too early in the long tournament to look too far ahead, so he probably won't worry much about the leaderboards until June, if they're still in the lead.

Until then, he feels comfortable that DiCola will keep an eye on things and update the team members, as needed.