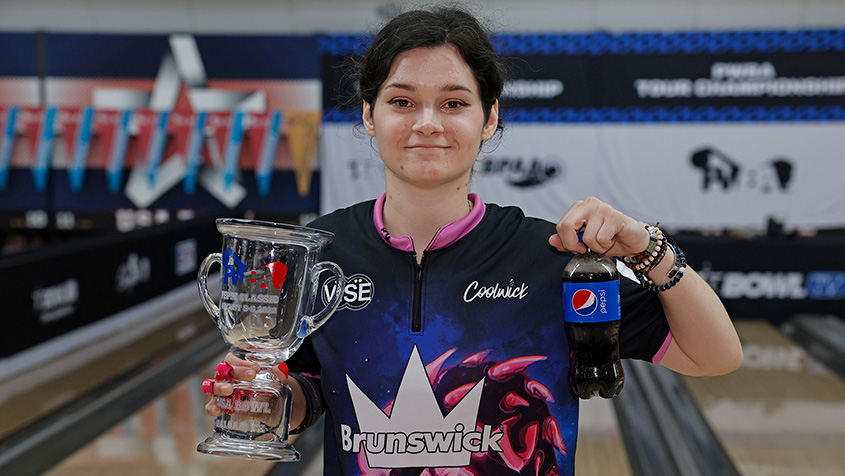 DALLAS - Ukraine's Dasha Kovalova has experienced highs and lows when appearing in finals on the Professional Women's Bowling Association Tour, but when she's comfortable and confident on the lanes, few have been able to keep up with her.

The 27-year-old right-hander started strong in both of her matches in Saturday's championship round at the PWBA Pepsi Classic, and she recorded her fifth career title with a 278-195 win over Danielle McEwan of Stony Point, New York, at USA Bowl.

The win was the first of the 2022 season for Kovalova, and she earned $10,000 for the victory. The stepladder of the Pepsi Classic was broadcast live at BowlTV.com.

Kovalova quickly found the right look on the 44-foot pattern used at the Pepsi Classic to secure the No. 2 seed with an 8-3-1 record in match play Saturday, and in the title match, she started with four consecutive strikes.

A 2-8 in the fifth proved to be the only thing to slow down Kovalova, and she struck on every shot following her spare conversion. McEwan didn't find the right combination to carry on the right lane until the ninth frame after striking on her first four deliveries on the left lane.

"I kind of had a mindset that if I keep on striking, hopefully it will be enough to tie," Kovalova said. "Then, I kept striking. When I got to the frame where I could not be caught, I kind of cried a little bit. It's been a rough year. Having a win and enjoying the moment was important for my psyche, and my mom was here, too, which was cool."

Kovalova also started with four consecutive strikes to settle in during her semifinal match against Hope Gramly of Aubrey, Texas. She rolled a strike to start her final frame to lock up the victory, 228-216.

Kovalova has averaged more than 259 in the title match of her five wins, and she's one of five athletes in tour history to roll a 300 game during a championship-round appearance. She fired the perfect game during the title tilt of the 2019 Pepsi PWBA Louisville Open.

She also has been susceptible to low games during her stepladder appearances, and it's something that has taken some time for her to work through.

"It felt so great, because usually I get out of the gates with a couple splits, and then the other person strikes, and then there's another 160," Kovalova said. "But, not this time. When I saw I could successfully keep the ball in the pocket and the reaction was predictable, I was like, yes, it's striking time.

"I tried to slow my mind down. Sometimes, it races too fast, so I move too fast and forget I have to actually look at my target to hit it. I also made sure I stuck to my pre-shot routine. Sometimes, I need to do it more than once just to calm my nerves, but I did have a little bit less of going back and forth tonight, which I'm very proud of."

McEwan, a seven-time PWBA Tour champion, was looking for her first win of 2022. She earned the top seed after averaging nearly 220 over 24 games.

She made her fourth consecutive championship-round appearance of the season, and sixth overall. She finished fourth at the PWBA Dallas Classic on Thursday and now has three runner-up finishes in 2022.

Gramly made her second championship-round appearance of the year after recording a fifth-place finish at the United States Bowling Congress Queens in May. The two-time National Tenpin Coaches Association Division II Player of the Year at McKendree advanced to the semifinals after defeating Mexico's Tannya Lopez, 246-203.

Lopez was making her first appearance in a stepladder on the PWBA Tour after qualifying as the No. 3 seed.

Farwell also was making her first championship-round appearance on the PWBA Tour. She joined the tour this season after being named the 2022 NTCA Division I Player of the Year at Duquesne.

The Pepsi Classic started with 83 athletes Friday. All competitors bowled two six-game rounds of qualifying to determine the top 12 for Saturday's match-play rounds.

The Pepsi Classic was the second of three events in the season-ending Dallas Classic Series.

Bryanna Coté of Tucson, Arizona, won the Dallas Classic on Thursday at USA Bowl for her fourth PWBA Tour title, and competition at the PWBA Tour Championships gets underway Sunday at 11 a.m. Eastern.

Pinfall will drop at the beginning of the Tour Championship, with all advancers bowling three eight-game blocks of round-robin match play Sunday and Monday. The top five competitors, based on total pinfall and bonus pins, will move on to Tuesday's stepladder finals.

The finals of the Tour Championship will be broadcast Tuesday at 7 p.m. Eastern on CBS Sports Network, with the winner earning the $50,000 top prize.
Skip Ad