Kris Prather Prevails in PBA 'King of the Lanes' Series 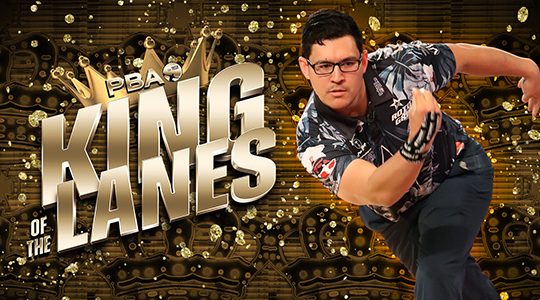 Jupiter, Fla. – The PBA King of the Lanes six-part series on FS1 came down to an exciting finish, with Kris Prather dethroning King Sean Rash, then besting Pete Weber to retain his crown.

Three-time title winner and 2020 PBA Strike Derby Champion Prather began his night by defeating PWBA’s Gazmine Mason, 230-194, in the first Contenders Match. Mason led the match leading up to the 9th frame, but missed a single-pin spare conversion in the 10th which ultimately cost her. Prather took advantage and struck out during his last four shots for the win. Prather moved on to bowl 15-time title winner Sean Rash and captured the crown by defeating Rash, 243-213.

With a new King on the throne for the third time in the series, two new contenders took to the lanes for the ultimate royal battle – 37-time title winner and PBA Hall of Famer Pete Weber and six-time title winner Kyle Troup, who won his last title at the 2020 PBA Tour Finals on Sunday. Weber, known for his showmanship on the lanes, had fun with his young opponent, copying his signature style and donning an afro wig as soon as the match got underway. Weber then started off shaky with a 3-4-6-7-10 split, but rebounded with six strikes in a row to defeat Troup, 235-227.

With the final King match set, Prather and Weber took to the lanes and did not disappoint. After seven frames, the match was even, but Weber caught a tough break in the 8th frame, leaving a 7-pin. With an opportunity to take the lead, Prather responded with a strike in the 9th frame and secured the win, 279-226.

“It’s an honor just to bowl against Pete on TV,” said Prather about bowling Weber. “For him to have such high praise for me, it just feels incredible. I never thought that someone of his caliber would have such high regard for me as a bowler.”

“As far as winning goes, it’s going to be so much fun getting on all my friends nerves having them call me King,” said Prather.

The PBA King of the Lanes series’ Golden Strike promotion, sponsored by Go Bowling!, added one final Golden Strike (a strike when the head pin is gold) thrown by Weber. With seven strikes thrown throughout the series, fans can get seven free games of bowing at participating centers, redeemable at GoBowling.com/FreeAmerica.

With health and safety top of mind, the PBA is following local and federal guidelines on COVID-19. The PBA is significantly modifying event procedures as well as taking all necessary precautions to reduce health risks for players and staff during competition. For a complete list of standards, please visit pba.com.