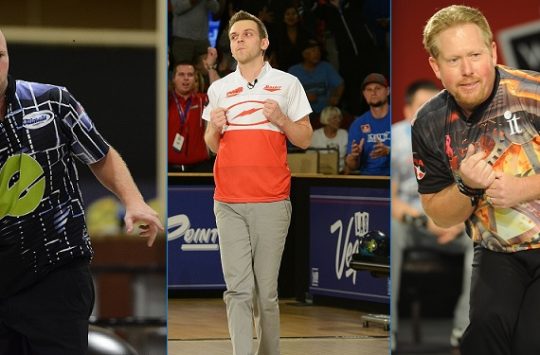 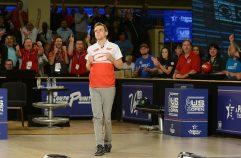 Lavoie, who joined the PBA late in the 2016 season, threw the only back-to-back strikes in the title match and bowled an otherwise error-free game to edge the 57-year-old Williams. The 23-year-old former Wichita State University star survived two 4 pin leaves on high pocket shots by Williams – both times following strikes – to claim his second victory of the year. In November, the Quebec City native won the U.S. Open, bowling the first nationally-televised 300 game in U.S. Open history en route to his first PBA title.

“Being able to bowl someone like Walter is special,” Lavoie said after his Shark victory. “I watched him a lot when I was a kid. It seemed like he was always on TV. It’s amazing he’s still competing with us, but to be able to bowl against him is a privilege. It was definitely a close match, and I was fortunate to come out on top.”

Williams, at age 57 years, 65 days, was in position to become the oldest player to win a PBA Tour title when he advanced out of the four-player elimination match to open the championship round. Williams broke open that match with three late strikes for a 227 game. Lavoie was second with a 212, followed by a 208 by Andrew Cain of Phoenix and a 201 by Matt O’Grady of South Amboy, N.J.

The record for the oldest PBA Tour titlist is held by John Handegard, who was 57 years, 55 days old when he won the PBA Tour event in Kennewick, Wash., in 1995. The significance of bowling Williams for the title wasn’t lost on the young Canadian.

“He’s definitely the most accomplished player I’ve ever beaten, so it’s great,” Lavoie said. “We talk about the history and a little part of me kinda feels bad it didn’t happen, but when we’re competing like this, everyone has to be a little selfish. I wanted to do it for myself.

“That’s what you dream about as kids,” he said after throwing a decisive strike on his first shot in the 10th frame. “Anyone who’s a true competitor wants to be in that position, wants to have the ball in your hand to win a title. It’s one of those dreams come true, but I always try to stick with the process and not think of things I shouldn’t be thinking about.  When you do that, it’s a lot easier to throw a shot in a situation like that.”

Williams, who continues to defy the calendar, was disappointed, but he took the loss in stride.

“It wasn’t my best game and Francois deserved to win,” the 47-time PBA Tour titlist said. “Hopefully it won’t be the last chance I get. Winning another PBA Tour title is something I definitely want to do.”

The Shark Championship was the final PBA Tour event of the 2016 season, but ESPN’s World Series of Bowling coverage continues with an encore presentation of the PBA World Championship on New Year’s Day at 4 p.m. ET., followed by the special USA vs. The World team event on Sunday, Jan. 8, at 1 p.m. ET.

The PBA’s first event of the 2017 season will be the DHC PBA Japan Invitational Jan. 11-14 at Bentencho Grandbowl in Osaka, Japan, featuring a field of 16 PBA international players and 16 Japan PBA competitors in a 32-game match play event. The winner will earn a projected $40,000 first prize and a PBA Tour title (if he/she is a member). The entire tournament will be live streamed on PBA’s exclusive online bowling channel, Xtra Frame. 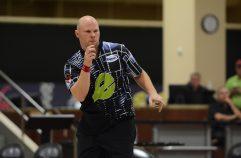 RENO, Nev. – Tommy Jones of Simpsonville, S.C., took another step toward his goal of joining an elite group of Professional Bowlers Association champions to win 20 titles when he captured the PBA Scorpion Championship presented by Reno Tahoe USA for his 18th PBA Tour title.

Jones, at age 38, made another statement for age-and-experience overcoming youthful exuberance when he defeated B.J. Moore III of Greensburg, Pa., 211-168, to win the Scorpion title.

“That (Scorpion) pattern is really tricky, especially when you’ve got four guys playing in a similar part of the lane,” Jones said. “You have to stay ahead of the moves, but if you get too far ahead, you go right by what’s happening to the condition.  It’s one of the hardest patterns for me because I’m not very good at throwing the ball slow. It actually hurts the next day because I’m so tense from trying to slow down.”

Jones won the event by starting the title match with four strikes to jump into a 41-pin lead midway through the match, and he kept the pressure on while the 28-year-old Moore struggled to find the pocket.

“I got fortunate on the first shot, but the next three were as good as I’ve thrown all week,” Jones said. “I got off to a little lead and he got a bad break (4-6-7 split in the third frame). From that point, it was just a matter of surviving.

“It was hard throwing the ball slow during the week, but it was really hard on TV when you’ve got the adrenalin going. It’s something I’ve been working at and I’m getting better. We’ll call it mission accomplished.”

Moore, who was trying for his first PBA Tour title, won his berth in the final match with a 224 game in the four-player elimination match to open the telecast while Jones advanced with a 212 game. Sweden’s Jesper Svensson and Brandon Novak of Chillicothe, Ohio, were eliminated with 194 and 175 games, respectively.

“Eighteen is great, but 20 is special,” he said. “There aren’t many guys in PBA history who have won 20 titles so that’s something that’ll hopefully happen down the road.

“Right now, the most important thing is I tied Chris Barnes…and I’m a decade younger than him, and you can quote me on that,” he added with a grin. (For the record, Barnes is 46).

ESPN’s World Series of Bowling coverage continues with an encore presentation of the PBA World Championship on New Year’s Day at 4 p.m. ET., followed by the special USA vs. The World team event on Sunday, Jan. 8, at 1 p.m. ET.

Beasley, at age 48, held off A.J. Johnson of Oswego, Ill., 246-237, for a title he began chasing in the early 1980s when he was on active duty with the U.S. Air Force. After converting a 9 pin in the second frame, he reeled off seven consecutive strikes and survived a pocket 7-10 split in the ninth frame to defeat Johnson, who was 2 years old when Beasley bowled his first PBA event.

“It’s been a great road,” Beasley said with a delayed grin. “I was late into bowling, late to the Tour. I just got better with age, like fine wine.”

The title match held almost as much drama as the four-player elimination battle that started the telecast, culling the field to the top two scorers for the finale. In the elimination match, Beasley finished with four strikes to lead the group with a 239. Johnson put together a late string of six strikes, adding a nine-count on his fill ball for 236. Denmark’s Thomas Larsen, a two-time PBA International-World Bowling Tour winner, appeared a lock for the final match, but left four pins standing on his final shot for a 235. And veteran PBA Central Regional competitor Patrick Dombrowski of Parma, Ohio, struggled to a 182 in his national television debut.

In the championship match, Beasley was a man on a mission.

“I began to doubt I’d ever win because of the injuries,” he said. “I fell off a ladder eight years ago and shattered my wrist, which cost me a year. Then I had to throw 13 pounds at the World Series that year (and cashed in three out of five events). Then I was out of bowling for two-and-a-half years with hip and back injuries.

“I saw nine different specialists. I had four tell me to do surgery, two said don’t, but I met a great surgeon who does reconstruction for people who have had a crushed pelvis in a car accident, and he said he knew exactly what my problem was. He did scans and MRIs, and found the issue and told me not to do fusion surgery because it would destroy my other hip and continue to destroy my back. So with lots of physical therapy and rest, it finally started to get better.”

Beasley, shortly after his retirement from 20 years of service with the Air Force, returned to bowling in 2014 and won a PBA “super” regional in Lubbock, Texas. Then he traveled to the PBA World Series of Bowling where he met Ingelimar Contreras, a three-time Venezuela Woman Bowler of the Year, and they got married a month later. And now he has a great support system.

“I’ve kept on learning along the way,” Beasley added. “The more you learn, the better you get.

“I expected to win. If you expect not to win, you won’t win. I’ve paid my dues. I’ve put in the time and effort. I fixed things that needed to be fixed. Now I’m looking for four or five more wins before I get to the (PBA50 Tour) in a couple of years.

The PBA’s World Series animal pattern championships continue with a Christmas Day doubleheader – the Scorpion Championship presented by Reno Tahoe USA and the Shark Championship – at 2:30 and 3:30 p.m. ET, respectively.

For fans who may have missed ESPN’s live coverage of the PBA World Championship on Dec. 11, ESPN will present an encore telecast of the PBA’s final major championship of 2016 on New Year’s Day at 1 p.m. ET.