The USBC Intercollegiate Team Championships is the pinnacle event of the college bowling season and featured the top teams in the country vying for national titles at The Cherry Bowl.

Lindenwood senior Jessica Lesagonicz stepped up in the final frame of Game 2 needing two strikes and seven to secure a victory. After the first shot crossed over and carried for a strike, she was perfect on the second shot. On the fill ball, she got just enough – leaving a 3-6-10 for the win. 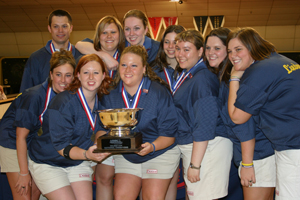 “The pressure was on, and I love it,” Lesagonicz said. “I went up there and did the best I could. I don’t believe it yet. It’s been a long four years, and we’ve finally done it. It’s a great feeling.”

On the men’s side, Saginaw Valley State got a clutch strike from anchor Dan MacLelland to propel it to victory. Trailing until the eighth frame, MacLelland pushed the Cardinals ahead with a strike on the first ball in the 10th for a double.

Newman’s Cory Simmons, a USBC Team USA member in 2005, struck on the first ball in the 10th, but went high on the second shot – leaving a 4-7 and giving Saginaw Valley State the championship.

“On Thursday, we really didn’t have a good look anywhere, but Friday we came out and had a lot of motivation behind us,” MacLelland said. “We just played off each other, read off each other’s moves and talked to each other like we did in our 11 other wins this year.”

“What they have accomplished here today will go with them the rest of their lives,” said Dorion, whose team also won in 1991 and 1997. “They will always be national champions. It is a life-changing experience. It will give them more pride in whatever field they go into.”

Saginaw Valley State had two players named to the men’s All-Tournament Team with MacLelland and Anthony LaCaze joining Brian Valenta of Lindenwood, Collin Kerschner of Purdue and T.J. Mento of Wichita State. Simmons was named the tournament’s Most Valuable Player.

For the women, Lindsey Coulles of Morehead State was named the Most Valuable Player while Stefanie Nation of Central Florida, Maryetta Lewis of Maryland-Eastern Shore, Amy Corbin of Morehead State and Lesagonicz also made the All-Tournament Team.

The 2006 USBC Intercollegiate Team Championships was sponsored by Brunswick, Pepsi and Kegel, the official lane maintenance provider of USBC.