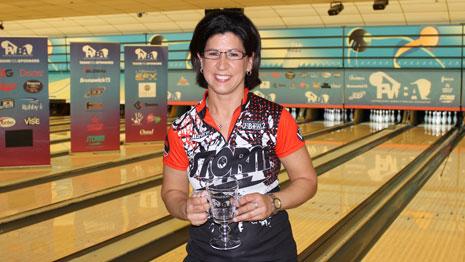 Competing on the season's toughest lane condition, which measured 35 feet in length and was nearly flat, Liz Johnson cruised past Stefanie Johnson in the final frame after Stefanie Johnson left a split for an open in the 9th

Johnson's other title this season came at the United States Bowling Congress Queens in May.

"It means a lot to win a second title this season because there are so many talented women out here and they are hungry to win titles," said Johnson, a USBC Hall of Famer who won her 13th career PWBA title. "You have to really stay on top of your game physically and mentally to be competitive out here."

The stepladder finals capped off a low-scoring event in which only three players averaged better than 200 for the tournament.

"You would think with a short pattern the scores would be a little lower anyway but they were just ugly this week," Liz Johnson said. "I like it when it is more of a grind like this, but with the start I had in qualifying this week I didn't even think I'd make the show."

Johnson, who earned $10,000 for the victory, took down Team USA member, Josie Earnest of Nashville, in the highest-scoring match of the stepladder finals, 235-202, to advance to the title match. In the opening match, Earnest topped Kelly Kulick of Union, N.J., 169-153.

For more information on the PWBA, visit PWBA.com.