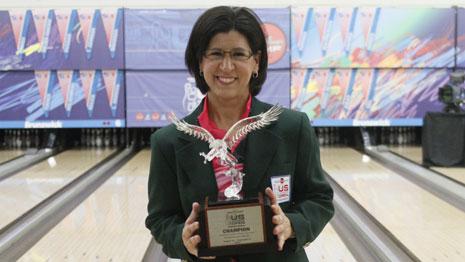 NORTH BRUNSWICK, N.J. - Defending champion Liz Johnson of Cheektowaga, New York, already may be in the United States Bowling Congress Hall of Fame, but she was able to add another huge accomplishment to her legacy Sunday with a win at the 2015 Bowlmor AMF U.S. Women's Open.

Sunday's finale at Brunswick Zone Carolier was a rematch of the 2007 title tilt, and O'Keefe had a chance at redemption with two strikes and seven pins in her final frame. After she left a washout and failed to convert, Johnson covered a 4 pin and got seven on her fill ball to escape with the win.

Johnson's win at the 2015 Queens in Green Bay, Wisconsin, in May kicked off the 2015 Professional Women's Bowling Association schedule. That victory secured her spot in next week's season-ending The Smithfield PWBA Tour Championship promoted by GoBowling.com, where she'll be seeded right into the semifinals as the 2015 PWBA points leader.

"This has been an amazing year, to say the least," said Johnson, who won last week's PWBA Detroit Open, too. "I haven't made the Queens show when I've won the U.S. Open, and I didn't make the U.S. Open show when I won the Queens (2009), so I was pretty happy just to get here. But once you're there, you want to take advantage. I didn't make the best shots I could have or should have, but I got it done."

On the way to the championship match, Johnson used just one double and a flawless spare effort to top four-time first-team collegiate All-American and 2015 PWBA Lubbock Sports Open winner Jazreel Tan of Singapore, 199-177. Tan was the only amateur in the top five and one of nine Team Singapore members in the field this week.

Before facing Johnson, Tan overcame a 28-pin deficit to slip past Team USA member Danielle McEwan of Stony Point, New York, 172-165. McEwan held the commanding lead at the halfway point, but three consecutive opens starting in frame six proved to be her undoing.

Tan started the day with a clean 195-190 victory against nearby Union, New Jersey's Kulick. Despite a late open frame, Kulick had a chance to double in the 10th frame for the win but left the 2-4-5 combination on her second shot, allowing Tan to advance.

All competitors at the 2015 U.S. Women's Open bowled 24 games over three days, while the top third of the field had eight more games to fight for a spot in the top 24, who advanced for 24 games of round-robin match play.

Bowlmor AMF, the largest operator of bowling centers in the world, is hosting and providing television sponsorship of more than $250,000 for the U.S. Women's Open and the 2015 Bowlmor AMF U.S. Open, which will be held at AMF Garland Lanes in suburban Dallas/Fort Worth from Nov. 2-8.