On Wednesday night, she declared her return to the winner’s circle when she defeated Bryanna Coté of Tucson, Arizona, 192-190, to win the PWBA Long Island Classic at Maple Lanes.

She earned $10,000 for the win, which was broadcast live on BowlTV.com.

Kuhlkin won her third career title in front of her native New York crowd and ended a winless drought which lasted a little more than two seasons.

“It's a revival of my career,” Kuhlkin said. “I really have felt the last two or three years my game has gotten better, but sometimes you need to see it on paper. To win the title kind of shows yourself, ‘You know, listen, you belong. You're an elite player on tour.’ And, winning this today is a revival of my career. This was the Liz Kuhlkin of 2018, but now she's back in 2022. It really feels that way.”

Things became interesting in frames seven and eight for Kuhlkin, when she missed two makeable spares. Coté split in the seventh and followed with a spare in the eighth to trail by just five pins. After trading spares in the ninth frame, Coté stepped up in the final stanza looking to apply pressure, since she couldn’t shut out Kuhlkin. She filled 20 pins with a spare and strike to finish at 190.

This left Kuhlkin needing to fill 15 pins, if she struck on her first shot in the 10th frame, to secure the victory. She left a 10 pin on her first offering and followed with a spare, which meant six pins was the magic number to win. Kuhlkin’s final shot crept high on the head pin but left the 4-6-7 split to grab the win.

Before the fill shot was thrown, Kuhlkin contemplated tossing her spare ball down the middle of the lane to secure enough pins but thought better of it because it wasn’t something she’s used to doing. 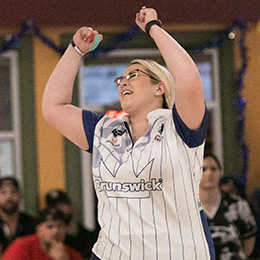 “I really wanted to win for myself and for my family,” Kuhlkin said. “I had to take a breather, because there were a couple of shots where I really don't think I executed the best I could’ve. I was letting my emotions get to me a little bit. I knew that I was going to have to bowl a good game because Bryanna’s a great player. She's been bowling fantastic. I actually told myself before the match started that I had to make seven or eight good shots to win, and I think I ended up doing just that.

“A 10 pin was probably the pin I wanted to leave to make because I felt that’s an easy spare for me to pick up. I’m glad I didn’t leave a 3-6 because I missed it about 100 times this week. Then, I got emotional when I made it, but I realized, “Hey, listen, you got to get six.’ It kind of ran through my mind, ‘Do I do the Pete Weber thing and throw it 100 miles an hour down the middle with a plastic ball?’ But, I've never done that and probably would’ve gotten three off the right, so I told myself just throw a good shot. I thought I threw a good shot and it still hooked. It could have been disastrous as well, but I got seven and got the job taken care of.”

Kuhlkin has had some honest conversations with herself during the last few seasons and realized what she had to do. The weekly grind that is the PWBA Tour can be exhausting and humbling, but also rewarding. That’s why being a professional bowler is her dream job. But, at the same time, she had to keep it real. She knew she had the talent, and her passion was still there, but the wins were not following.

It was clear she had to take things more seriously. Following her U.S. Women’s Open win in 2018, Kuhlkin admittedly relaxed, which cannot happen around the best players in the world because “they’re too good out here.”

After doubting her career accomplishments and wondering if she had overachieved, Kuhlkin spent the offseason bowling more competitive tournaments and watching video. She saw that hard work pay off Wednesday night.

“You have to always be on your game out here, and I've been on my game,” Kuhlkin said. “I'm pretty lucky to be where I'm from in the Capital Region, because there are a lot of good bowlers there. There's a lot of bowling tournaments on the weekend, and it’s competitive bowling. You can practice until your heart bleeds out, but you really need to have the competitive juices on the weekend, every weekend.

Coté had earned the top seed for Wednesday's stepladder finals on the strength of a 10-1-1 record in match play earlier in the day at Maple Lanes. She finished match play with a 5,366 total, including bonus pins. She made her third consecutive championship-round appearance (Twin Cities Open, St. Petersburg-Clearwater Open) and was in search of her third career PWBA Tour title. She finished as the runner-up for the second consecutive event.

Kuhlkin advanced to the title match by defeating four-time titlist Dasha Kovalova of Ukraine, 185-161. Kuhlkin again used a strong start to hold off Kovalova and advance.

Kuhlkin defeated Stefanie Johnson of McKinney, Texas, 209-205, in Match 2. Kuhlkin survived after Johnson didn’t deliver a strike on her first shot in the 10th frame, which would have given her the win.

Kuhlkin kicked off the stepladder with a win over four-time champion Diana Zavjalova of Latvia, 215-180. Kuhlkin was clean throughout, while Zavjalova lost her look late in the match. Zavajalova was making her second consecutive championship-round appearance.

The Long Island Classic featured 12 games of qualifying on a 38-foot oil pattern Tuesday to determine the top 12 players for round-robin match play Wednesday. Total pinfall, including bonus pins, for 24 games determined the five finalists for the stepladder.

The combined qualifying totals for the Long Island Classic and BowlTV Classic (24 games) will determine the 24 athletes advancing to the BVL Classic.

Pinfall will drop at the beginning of the BVL Classic, with all advancers bowling three eight-game blocks of round-robin match play Saturday and Sunday. The top five competitors, based on total pinfall and bonus pins, will advance to Sunday’s stepladder finals.

The finals of the BVL Classic will be broadcast Sunday at 5 p.m. Eastern on CBS Sports Network, with the winner earning a $10,000 top prize.
Skip Ad