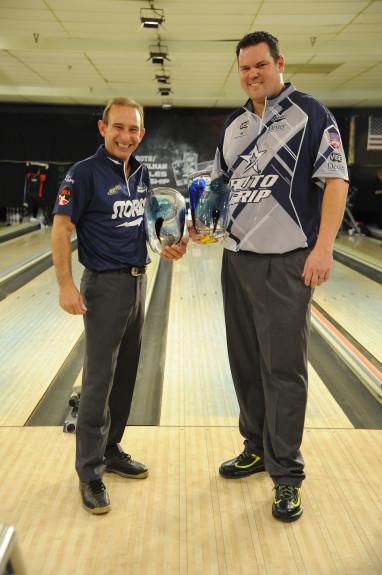 The doubles event aired Sunday on ESPN with the hall of fame namesakes in the crowd, watching the action.

Duke, who stands 5-foot-6 and weighs 128 pounds, teamed up with Malott, at 6-foot-4, 250 pounds, to defeat international stars Dom Barrett of England and Osku Palermaa of Finland, 228-203, for a victory that also gave Malott 10 career titles and eligibility for future PBA Hall of Fame consideration.

The 2011 Roth-Holman Doubles champions entered the finals as top qualifiers, and they bowled a game that was four single-pin spares away from perfection despite their contrasting physiques and bowling styles. Duke played a relatively straight line up the outside of the right lane, leaving and converting three of the four single-pin spares, but never missing the pocket. Malott played an inside angle on the left lane with his power game, striking on six of his seven shots.

“On day one in Milwaukee (where qualifying rounds for the doubles event took place two weeks earlier), there was so much traffic I had to play straight,” Duke said. “I couldn’t go around (the big-hook players), but the shot I found looked great and I told myself to remember that, because I figured that’s what we would face in the TV finals if we got that far, and that’s exactly what happened.”

“We discussed the situation and decided I’d finish the game on the left lane, where I could stand far to the left on the approach and wouldn’t have to deal with the ball return,” Malott said. “We had to let the conditions develop, but Norm was okay on the right lane, and I was okay on the left. Norm told me some past history about leaving single pins on the right lane and I wanted to make sure he remembered what he told me.”

As predicted, Duke left back-to-back single pins in his first two frames of the Baker-format contest. He said he was contemplating a ball change in hopes of striking, but Malott talked him out of it.

“Wes told me to just live with it,” Duke said. “He told me, stick with the plan. We got a couple more nine-counts, but he just sat on that left lane and pounded the pocket. That’s the reason we worked together so well. He believed in me and I believed in him, and it worked.”

While breaking his tie with Pete Weber for third place on the PBA career titles list (behind Walter Ray Williams Jr. with 47 and Earl Anthony with 43) was memorable, Duke was subdued about the accomplishment.

“I don’t think anyone believes Pete is done winning titles,” the 50-year-old Duke said. “I don’t like to think that I’m done, either. This is part of a process in building a career. I’m glad to be part of helping Wes build with his career, and I’m certainly glad he’s helping with mine, because without him, I’m probably still chasing Pete. But to be ahead of Pete for even one day is a remarkable achievement, and something I truly value.”

Malott, 38, felt the same about winning his 10th title, which will earn him a spot on the PBA Hall of Fame ballot in seven years, when he competes in his 20th year of membership.

“Winning the doubles title in 2011 after struggling for a couple of years after I won Player of the Year for the 2008-09 season kind of kick-started me again,” Malott said. “Winning my 10th title and being eligible for the hall of fame someday is a huge honor, but I really don’t think it’ll set in until that day that it’s announced I’m going to be put into the hall of fame. I’m very proud and humbled by what I’ve been able to accomplish, but right now it’s mind-boggling to me.” 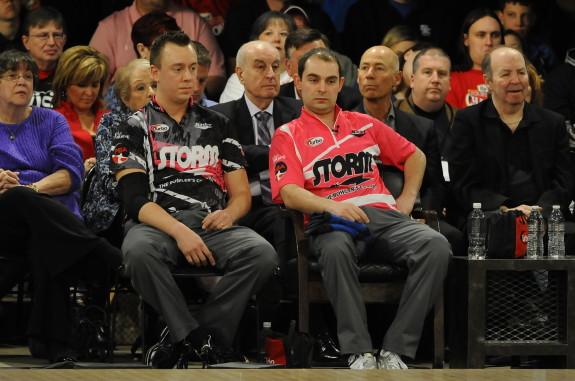 Barrett and Palermaa – the 2013 and 2010 PBA World Championship winners respectively – defeated DJ Archer of Friendswood, Texas, and two-hander Shawn Maldonado of Houston, Texas, 237-179, in the opening stepladder match, spoiling Maldonado’s television debut and bid for his first title. In the second match, the Finnish two-handed player and his English partner took advantage of back-to-back splits by Australian two-handed star Jason Belmonte and partner Bill O’Neill of Langhorne, Pa., to win 178-168.

Barrett and Palermaa started the semifinal match with six consecutive strikes and took advantage of back-to-back open frames by Tom Daugherty of Tampa, Fla., and partner Dino Castillo of Carrollton, Texas, to post a 220-201 victory and a berth in the title match.