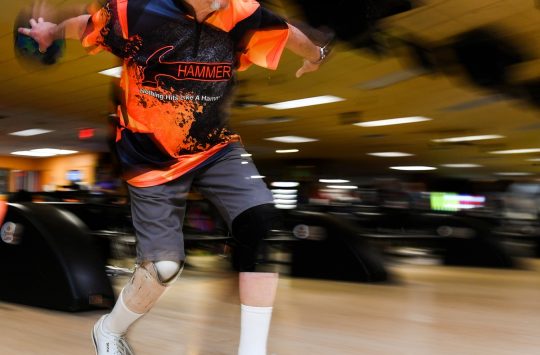 Losing part of his right leg in a factory accident 55 years ago has not been a handicap on the lanes to 75-year-old Larry Weiland.

The life-long Pekin, Ill., resident bowls with a prosthetic limb on his right leg, starting just below the knee, and he might be the most prolific one-legged bowler ever.

“I’ve got about 14 perfect games now and two 800s,” says Weiland, who bowls regularly in three leagues and sometimes gets called to sub so often he finds himself bowling seven times a week.

Weiland’s Way: Because he didn’t start bowling until after he lost part of his right leg in an accident, Larry Weiland never had to adjust to bowling with a prosthetic limb.

The right-hander bowled his most recent 300 in 2016 and just missed one last season when he shot 299 amid a 779 series at Sunset Lanes in Pekin.

“That was frustrating, because it would have been my first 300 at Sunset,” he says.

While USBC does not keep records of honor scores rolled by people with prosthetic limbs, there are online stories of bowlers with artificial limbs who inspire people because they have rolled just one perfect game. Within that demographic, Weiland might be considered “Mr. 300.”

Inspiration: Weiland says that after getting his prosthetic limb, he "wanted to prove I could do what anybody else did. So I did everything — slow-pitch softball, industrial-league and church-league basketball. It pushed me to do that much better.”

He finished last season with a 213 average at Sunset Lanes and had a career-best 220 average in the 2008-09 season. He has bowled well enough over his career to earn induction into the Greater Pekin Bowling Association’s Hall of Fame in 2014 — and not in the handicapped division.

“I’ve never done anything handicapped,” Weiland says. “My vehicle does not have handicap stickers. I don’t believe in any of that stuff. I can do anything everybody else does.”

Weiland is divorced and lives alone, with no special ramps or grab bars in his house to help him get around. He’s had to learn to fend for himself ever since he lost the lower part of his right leg at age 20 in 1963.

“I got it caught in a conveyor in a factory, working at Corn Products,” Weiland says. “It took a little while for it to heal up real good. I lost it in April, and by August I had an artificial leg. After , I became very competitive. I wanted to prove I could do what anybody else did. So I did everything — slow-pitch softball, industrial-league and church-league basketball. It pushed me to do that much better.”

Because he didn’t start bowling until after his accident, he never had to adjust to bowling with the prosthetic limb.

“I started bowling at Roxy's (another Pekin house) in the late 1960s,” he says. “I was averaging in the upper 180s. But I was never real good, because, until I retired, you just went bowling and had a good time.

“I never had any problems with the leg, because I slide on my left foot, being right-handed. It never bothered me once I got used to using it.”

“I bowl in shorts all the time, but some leagues make fun of me because sometimes I wear long pants," Weiland says. "We always bug each other back and forth.”

Weiland’s game really started to improve when he began bowling with some of the better bowlers in Pekin.

“I started bowling with my cousin, Jim Reader, his boy Jim Jr.,” he says. “I started listening to what they were saying about bowling balls and how to make deliveries, and I learned a little on my own, too.

As long as he stays healthy, he doesn’t think he’ll slow down any time soon.

“The main thing is that I keep my legs in good shape,” Weiland says. “I use an exercise bike, and in the summertime I run a mowing business. So it’s a lot of walking.”

Weiland also does not get any special treatment from the other bowlers in his leagues.

“I bowl in shorts all the time, but some leagues make fun of me because sometimes I wear long pants," he says. "We always bug each other back and forth.”

And Weiland usually comes out on top, on and off the lanes — without handicap.