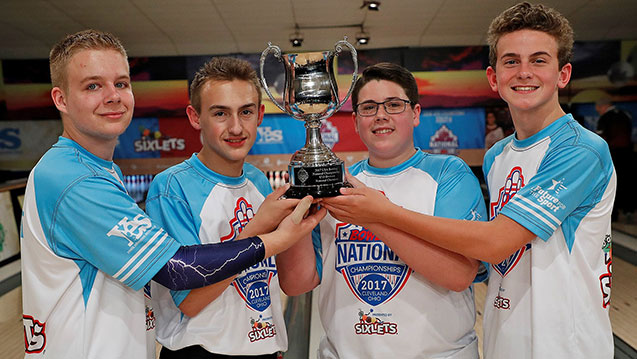 WICKLIFFE, Ohio - Spencer Robarge of Springfield, Missouri, has enjoyed individual success under the TV lights, and he had the opportunity to share that experience with three teammates as they won the 15-and-under title at the 2017 USA Bowling National Championships presented by Sixlets.

The 14-year-old two-hander, who won the boys 12-and-under title at the 2015 Junior Gold Championships, successfully anchored 3 Rights Make a Left in a youthful battle of the sexes against the all-female Bring It On.

Robarge's team captured the U15 crown at Game of Wickliffe by a 3-1 margin in the best-of-five modified Baker final.

Robarge was joined on the lanes at Game of Wickliffe by Brandon Bonta, Silas Limes and Peyton Montgomery.

"In all honesty, it feels really good to be able to represent Junior Gold, USA Bowling and the Midwest in such an awesome setting and opportunity," Robarge said. "We worked really hard to get back here after losing sooner than we wanted to last year. To be able to finish it off feels really good."

The Kelly Bonta-coached 3 Rights Make a Left averaged more than 232 through six qualifying matches at Yorktown Lanes in Parma Heights, Ohio, on July 19, more than 10 pins higher than the next closest team, but only managed a 3-3 record, earning the No. 7 seed for the double-elimination match-play bracket held July 20 at Cleveland's Freeway Lanes of Parma.

The squad then won three consecutive matches before needing two tries to get past the Heartland Region champion.

The team, which was 3-3 during qualifying en route to the No. 9 seed for match play, was coached by the International Bowling Campus Youth Committee's Volunteer of the Year Leslie Bohn and her husband, United States Bowling Congress and Professional Bowlers Association Hall of Famer Parker Bohn III.

Although her team struggled with carry and single-pin spares in the loss, the Bohns chose to see the positives in the experience.

"I would take my chances again in this situation in a heartbeat," Leslie Bohn said. "This is a really strong group of girls. We prepared the best we could for this. It was the first time on TV for five of the six players, and to hit the pocket as much as they did, I couldn't be more proud."

Bring It On recorded 17 nine-counts in the four games, missing seven of them.

The 2017 USA Bowling National Championships included two divisions - 12-and-under and 15-and-under - each with its own TV show.

Both shows were taped July 22 in conjunction with the 2017 Junior Gold Championships presented by the Brands of Ebonite International for broadcast on CBS Sports Network.

The 2017 USA Bowling National Championships started with 32 teams - 16 in the 12-and-under division and 16 in the 15-and-under division - which bowled five and six one-game Baker matches, respectively at Yorktown Lanes, with their win-loss records determining the seeding for their respective double-elimination match-play brackets.

The schedule originally called for 15 matches, but a citywide power shortage forced the day to be cut short. Ties were broken by total pinfall.

Match play took place July 20 at nearby Freeway Lanes of Parma and featured best-of-three Baker matches to see who advanced.

The event's finals were televised on CBS Sports Network for the second consecutive year.

Qualifying and all rounds of match play leading up to the televised finals were broadcast on BowlTV.

The USA Bowling program was introduced at the regional level in 2013 and grew to include the first USA Bowling National Championships last year in Indianapolis.

The 32 teams competing in the Cleveland area all earned their spots at the national event by winning one of 16 regional tournaments held across the country throughout the end of 2016 and beginning of 2017.