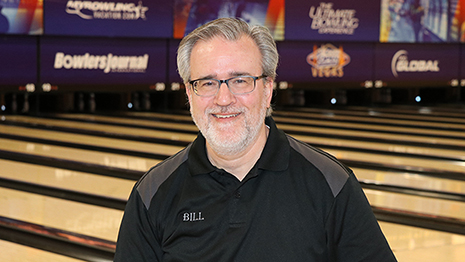 LAS VEGAS - Bill Kolstad of Mendota Heights, Minnesota, recently returned to bowling after having surgery to repair a torn Achilles tendon, but any lingering effects of the injury didn't seem to slow his run up the leaderboard Sunday at the 2022 United States Bowling Congress Open Championships.

The 58-year-old right-hander's 714 series is the highest set rolled in Standard Singles since the Standard Division was introduced in 2017, and it now makes him the player to beat with two-thirds of the 129-day event still to be contested.

Kolstad rolled games of 215, 256 and 243 to slip past Daryl Stephens of Gilbert, Arizona, who took the lead with a 705 series on March 13, the first day of doubles and singles competition at the 2022 tournament at the South Point Bowling Plaza.

In his final frame Sunday, Kolstad spared a 5 pin and got nine on his fill ball to lock up the top spot. He knew he was bowling well, but he didn't know the situation. He just wanted to finish with another good 200 game.

"The first game was a routine and clean 200, and the second game was big, even with an unfortunate open in the middle," Kolstad said. "A couple runs of four or five strikes got me to a big second game, and it still seemed to be in place in the third game. I was able to take advantage of that and finish strong, but I didn't know what the numbers were."

Kolstad tore his Achilles tendon in the fall while playing tennis, and he has been back on the lanes for just over a month.

Despite the layoff and an up-and-down recovery process, Kolstad knew he'd be OK once he got back on the lanes and back into his routine. Though he has experienced some fatigue at times, it has been manageable. Some excitement and adrenaline helped him through Sunday's performance.

"I'm still trying to find my way back, but I was able to throw a few consecutive good shots, I guess is the way I would summarize today," Kolstad said. "The recovery has been a little up and down, but physically, in general, I felt pretty good. I also feel pretty good right now, which is even better, considering I just bowled six games."

The highest winning score in the first four years of Standard Singles competition was 711, rolled by Mark Wojtusiak of Chandler, Arizona, in 2021.

The highest series rolled by and Standard bowler is 761, posted by Tim Pounds of Shawnee, Kansas, in his team event in 2021.

Kolstad's score Sunday may not be an overall record, but it does mark the highest series of his 19 appearances at the Open Championships, and it helped him to the best all-events total of his career.

His highest series prior to Sunday was a 620 effort in singles in 2006.

Kolstad added sets of 563 in doubles and 546 in team this weekend for a 1,823 total, his best by 95 pins. Gregory Witt of Phoenix leads Standard All-Events this year with a record 1,982 total, and Kolstad's score puts him just inside the top 30.

Standard Singles and Standard All-Events include bowlers with entering averages of 156-175. Like most bowlers, Kolstad's placement was based on his most recent 27 games at the Open Championships.

"Being in the Standard Division, which is based on my past performances, shows I haven't had a whole lot of success here, and I've had a lot of games in the 170s and 160s," Kolstad said. "Everything fell into place today, though, which was very nice."

Kolstad said he didn't consciously do anything different in singles Sunday, but he felt better overall following a turbulent start in doubles. He could tell he'd found the right ball and right place to play on the lane, and hitting the same spot consistently was the key to his success.

Sure, there were a few Brooklyn strikes and a little bit of luck involved, but he's proud of the position he's now in on the biggest stage in bowling.

"This is amazing," Kolstad said. "I was just happy to come back and bowl, and I didn't have any expectations, which sometimes is a good thing and helps you perform better. Being in this position is a very, very good feeling."

As the bowling season begins to wind down for Kolstad, he'll turn his focus to his youngest son's upcoming college graduation and helping the new grad get settled into life after college.

One thing Kolstad will try not to focus on is the online leaderboard for the Open Championships.

It's a habit that has served him well, since he and partner, Robert Hoffman, took the lead in the 378 & Over Handicap Doubles at the 2022 Minnesota State USBC Open Tournament earlier in April.

That event is scheduled to run through May 1, and Kolstad is looking for his second state doubles win.

Perhaps the only thing that could top that is an Eagle from the 2022 Open Championships in Las Vegas, which kicked off March 12 and will conclude July 18.

"To win an Eagle would be incredible and not something I'd ever think would be in the realm of possibility for me, even though I've been competing here for a while," Kolstad said. "I've been bowling for a long time, and I'm OK, but not great. Every once in a while, things fall into place, and to win would be wonderful."