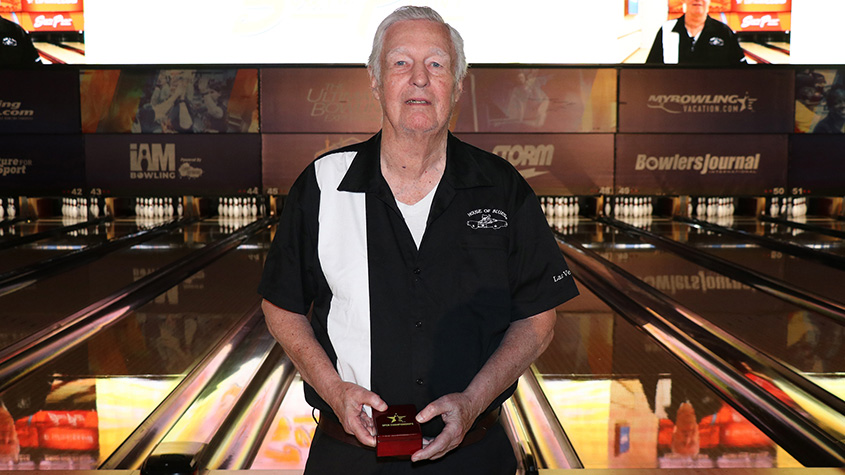 LAS VEGAS - For Thomas Meade of Elizabeth, New Jersey, reaching his 50th consecutive United States Bowling Congress Open Championships appearance has been a reflective experience that he soon will not forget.

Meade was recognized for his longevity Wednesday at the South Point Bowling Plaza and received a plaque, chevron and diamond lapel pin to help usher him into the 50-Year Club at the event.

"Well, it definitely means that I'm old," Meade, an 81-year-old left-hander, said jokingly. "I honestly didn't think that I'd do it."

Making his USBC Open Championships debut at the 1972 event in Long Beach, California, Meade is the only one left from his original group that still bowls.

"We started in 1972 as a group of six guys," Meade recalled. "Four of them have passed, and the other quit bowling 10 years ago. Bill Neafsey knew me as a competitive bowler in the Elizabeth area and asked me to bowl my first national tournament."

Over his 50-year run, Meade has fallen in love with the travel and looks forward to the trip to the Open Championships every year.

"I'd have to say my favorite city I've visited and bowled in during my 50 years has been Jacksonville," said Meade, a Union County USBC Hall of Famer. "But, Salt Lake City will always hold a special spot in my heart."

In 1996, Meade bowled his personal best at the Open Championships in Salt Lake City, firing a 2,018 all-events total. It was the highest of his career by nearly 100 pins.

Meade plans to continue his streak next year in Reno, when the Open Championships returns to the newly renovated National Bowling Stadium.

"My love for bowling is what has kept me going and will continue to keep me going," Meade said. "I look forward to the tournament every year and am excited to be back next year."