O'Keefe in control after day one of 2022 PWBA BowlTV Classic 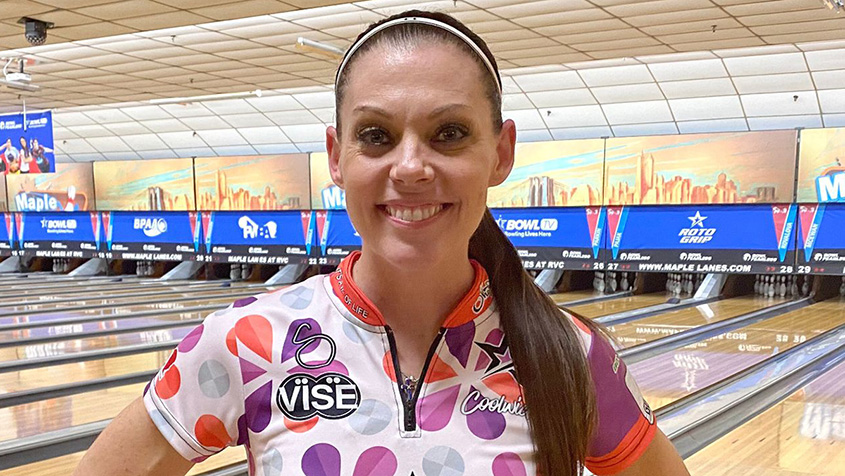 ROCKVILLE CENTRE, N.Y. - Shannon O’Keefe of Shiloh, Illinois, grabbed the overall lead after two rounds of qualifying and will lead the field into match play at the 2022 Professional Women’s Bowling Association BowlTV Classic.

O’Keefe was excellent throughout the day and used a pair of steady six-game blocks to average more than 226 to help surpass Colombia’s Clara Guerrero, who held the lead after this morning’s opening round.

The top 12 players after Thursday’s second round advanced to Friday’s match-play rounds, with Marcia Kloempken of Pleasant View, Utah, claiming the final spot with a total of 2,511, an average of 209.25.

The BowlTV Classic presented a different challenge on the lanes with a 50-foot lane condition across the house at Maple Lanes. The pattern seemed to produce some additional friction, which O’Keefe had to migrate to find the right combination.

“I was trying to be really soft-handed with it at the bottom, so when it would see the friction, it wouldn't want to just check off of it,” said O’Keefe, who owns 15 career PWBA Tour titles. “My moves all day were just to keep it in front of me and feel like I'm rolling it over my left toe. Where I actually got into trouble was down on the low end. We got quite a bit farther left much quicker tonight, which is normal, but I did not bring my eyes with me as quickly as I needed to. So, my angles just got a little bit too open for a few frames. Fortunately, I was able to dial it in and bail out 190. But, it was a great day.”

The stepladder will take place at 7 p.m. Eastern and be broadcast live at BowlTV.com. The champion will earn $10,000.

O’Keefe’s performance this week also allowed her to secure the top spot in the upcoming PWBA BVL Classic. The top 24 athletes based on their combined qualifying totals for the Long Island Classic and BowlTV Classic (24 games) determined the advancers to the BVL Classic.

Mexico’s Sandra Gongora fired games of 267 and 279 during her final two games of qualifying Thursday at the BowlTV Classic to earn the final spot in the BVL Classic. She finished with a 24-game total of 4,769, an average of 198.71.

Pinfall will drop at the beginning of the BVL Classic, with all advancers bowling three eight-game blocks of round-robin match play Saturday and Sunday. The top five competitors, based on total pinfall and bonus pins for each victory, will advance to Sunday's stepladder finals.

The finals of the BVL Classic will be broadcast Sunday at 5 p.m. Eastern on CBS Sports Network, with the winner earning a $10,000 top prize.
Skip Ad