O'Keefe wins singles, pairs with Bond for silver in doubles at 2022 World Games 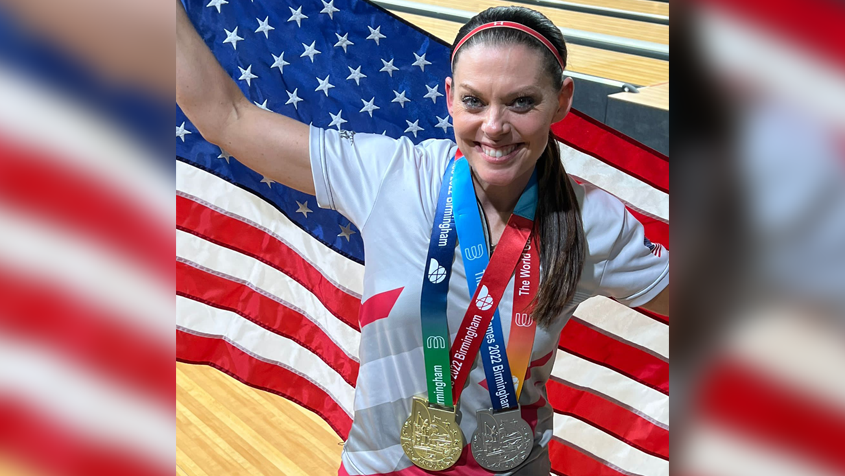 BIRMINGHAM, Ala. - Shannon O'Keefe of Shiloh, Illinois, collected a medal in each event at the 2022 World Games, winning gold in singles and silver in doubles with Julia Bond of Aurora, Illinois, for Team USA.

The events were held from July 7-11 on eight specially constructed lanes inside the Birmingham-Jefferson Convention Complex, which featured string pinsetters instead of traditional free-fall pinsetters. Bowling was one of more than 30 sports represented at the 2022 World Games, which will conclude July 17.

Both medal rounds took place Monday, with O'Keefe first capturing gold in singles with a 2-1 victory in the best-of-three finals against Colombia's Clara Guerrero.

The 18-time Team USA member started the match with nine consecutive strikes on the way to a 279-194 win to take the early advantage. A 10 pin on her first delivery in the final frame halted her run at 300, but she already was looking ahead toward the rest of the match while trying some different equipment.

"Bryan (O'Keefe, Team USA's head coach) asked me to change balls in the ninth frame on the left lane, and it wasn't even a question since I already had won the game," O'Keefe said. "We wanted to prepare if something happened. I knew I was throwing it and executing well, so we changed balls in the ninth and to a third ball in the 10th just to see what was going on.

"It was my first time all week of bowling on the burn, and on top of that, it was the burn from the men's final, which we haven't done at all. I wanted to be prepared."

In Game 2, Guerrero took the early edge after a 4-9 split and open frame in the second from O'Keefe.

O'Keefe made up the difference with strikes in the fourth, fifth and sixth frames, but Guerrero responded with a key double in the eighth and ninth and secured a 216-205 win to even the match.

Although she lost the match, the preparation from Game 1 for O'Keefe helped as she started to use a different ball on each lane in the middle of Game 2 and made quicker on-lane adjustments.

In the deciding game, O'Keefe started with six consecutive strikes to take the lead. Guerrero started the game with three strikes of her own, before leaving and converting the 3-4-6-10 split.

"That was huge," O'Keefe said. "I really liked the shot, and if anything, I felt like I caught all of it. With these string pins, we've been able to make so many things that we normally wouldn't, so I was very confident I would be able to give it a run. For the pin to be able to pop out of the back and make it was pretty sweet."

Earlier in the year, O'Keefe announced she was going to retire from the Team USA program at the end of 2022. Her goal was to not let that influence her during the week, but she allowed herself a moment to reflect on all that she's accomplished while wearing the red, white and blue as she wrapped up the win.

"When I was standing on the approach for my fill shot and the crowd started clapping, I started to get emotional, and I wasn't expecting that," O'Keefe said. "Anytime I've been able to represent Team USA, it's been such an honor. With this potentially being one of the last go-arounds, I really tried to put that out of my head for this tournament. I didn't want to be emotional. I just wanted to stay focused and do what I do. When it ended and I won, it actually caught me off guard. I told Bryan I guess I wanted to win this more than I thought. It was really great."

A total of 16 countries qualified in each gender-based division for the 2022 World Games through their federations, with each country allowed to send a maximum of two male and two female athletes to Birmingham.

In singles, the 32 athletes in each division were divided into two draws of 16. A single-elimination format was used, with each match featuring a best-of-three format.

The winner of each draw advanced to the gold-medal match, while the two players who lost in the semifinals bowled an additional match to determine the bronze medalist.

Australia's Sam Cooley was the gold medalist in singles in the men's division, defeating Czech Republic's Jaroslav Lorenc in the title match, 2-1. The match for bronze featured a pair of teammates from Canada, with Graham Fach besting Darren Alexander, 2-1, to collect the medal. 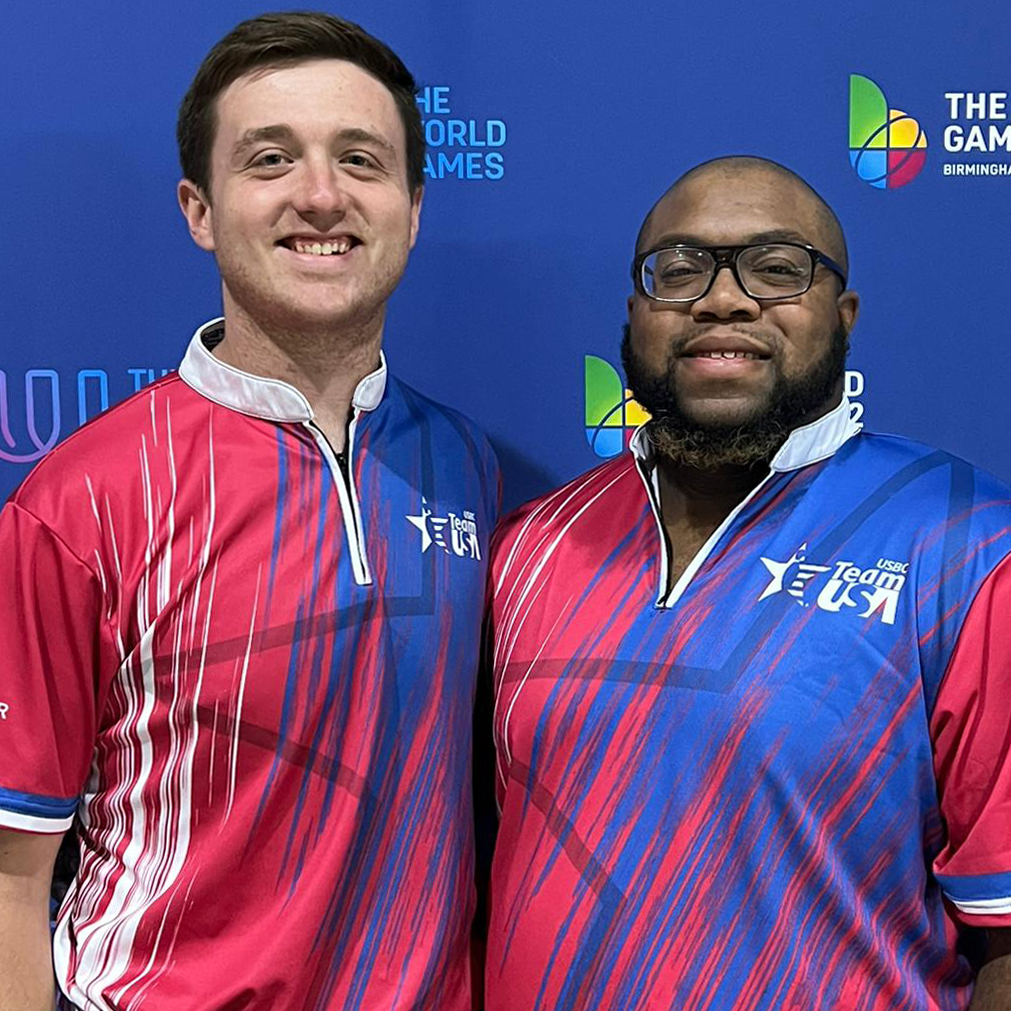 Team USA's Trent Mitchell of Chicago and Alec Keplinger of Coldwater, Michigan, each won their opening match in singles before being eliminated in the following round.

The women's final in doubles also went to a deciding match, as Denmark was able to record the win by a 2-1 margin over the United States to earn gold. Denmark's team featured Mika Guldbaek and Mai Ginge Jensen.

The left lane proved troublesome for both teams during the final, which featured both players exchanging frames in the Baker format.

In Game 1, Denmark was able to string three consecutive strikes together, starting in the fourth frame, to take the advantage as Team USA was able to get to the pocket but not record a double. Both countries opened in the seventh frame, giving Denmark a 15-pin lead.

Denmark was able to maintain the advantage on the way to a 199-184 win. 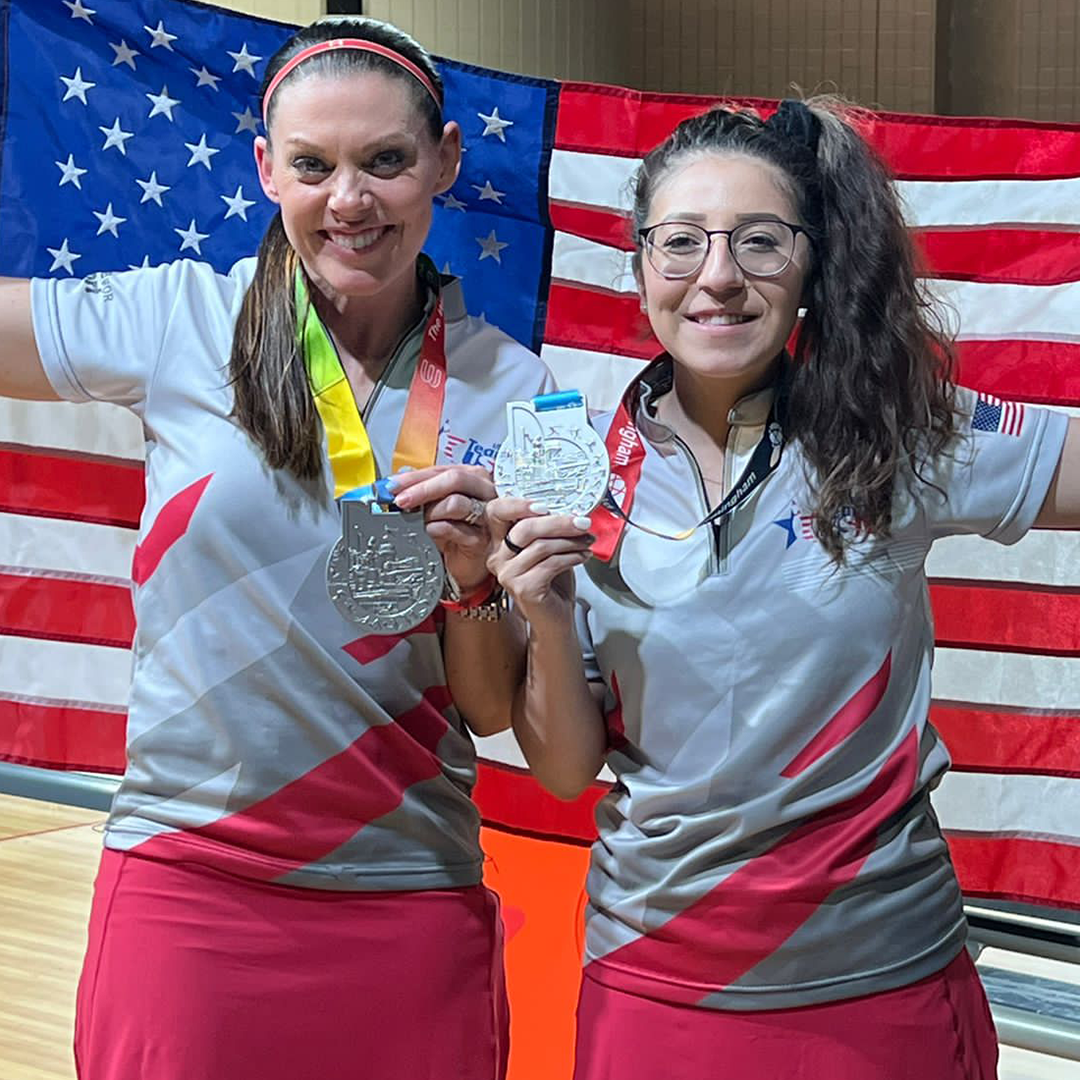 Team USA was clean in Game 2, with Denmark unable to recover from two splits in the first six frames. O'Keefe and Bond collected the win to force Game 3, 226-182.

Denmark was able to quickly regain its look to the pocket returning to the right lane in the deciding game, starting with a spare before rolling five consecutive strikes. Team USA only was able to roll three strikes in Game 3, with a 3-4-6-7 split and open in the fourth frame allowing Denmark's lead to jump to nearly 50 pins. The final score of Game 3 was 226-177.

For doubles, 16 teams competed in each division using the Baker format. Doubles also featured a single-elimination bracket, with best-of-three contests determining which team advanced to the next round.

The final two teams from the bracket met in the title match, while the teams that lost in the semifinals bowled one additional match to determine the bronze medalist in each division.

The bronze medal in the women's division went to Malaysia after posting a 2-0 win over Colombia. Malaysia's team included Sin Li Jane and Natasha Roslan.

Denmark completed the sweep in men's doubles, earning gold with a 2-0 victory over Canada. The men's team from Denmark featured Jesper Agerbo and Dan Ostergaard-Poulsen, while Canada's Fach and Alexander earned silver medals.

Mitchell and Keplinger won their opening match in doubles but lost to Korea in the quarterfinals, 2-0.