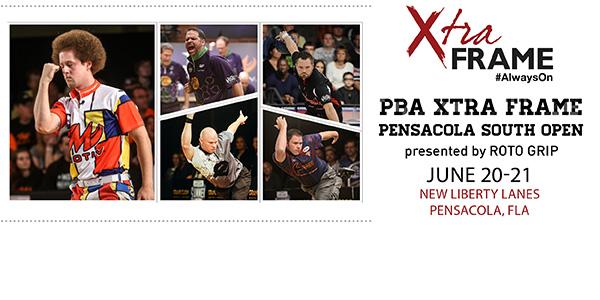 A field of veteran Professional Bowlers Association Tour champions will face some of the most talented future stars in the sport this weekend when New Liberty Lanes hosts the PBA Tour Xtra Frame Pensacola South Open presented by Roto Grip.

At stake will be a $10,000 first prize and, for PBA members, a PBA Tour title. And for the first time, the Pensacola South Open will be video-streamed live, from start to finish, around the world on PBA’s Xtra Frame online bowling channel. Xtra Frame is an online subscription-based service, available on a three-day plan for only $3.99, month-long plan for $7.99 and full year XF Season Ticket plan for $64.99. Click here for details.

Challenging the established PBA stars will be 2013 PBA Rookie of the Year EJ Tackett of Huntington, Ind., and 2015 PBA Rookie of the Year contender, AJ Johnson of Oswego, Ill., along with highly-touted amateurs Michael Coffey of Melbourne, Fla., the 2014 Teen Master Grand Champion; Kamron Doyle of Brentwood, Tenn., who cashed in the prestigious U.S. Open at age 14 and 2012; and 2013 Teen Masters Grand Champion, Greg Young Jr. of Viera, Fla. All five of these young players are past or present members of Junior Team USA, the national team that represents the United States in international youth competition.

As non-members, amateurs do not receive credit for a PBA title if they win, but they can accept prize money in the form of scholarship contributions or, in cash, depending upon their amateur eligibility circumstances.

The Pensacola South Open also is a Professional Women’s Bowling Association Regional points qualifying tournament, which means a number of women will be competing in the field alongside the men to earn points toward representing the PBA South Region in the end-of-year PWBA-PBA Women’s Regional Challenge at the PBA World Series of Bowling in Reno, Nev.

The Pensacola South Open gets underway on Friday with a practice session for tournament players from 3-5 p.m., followed by pro-am squads at 6 and 8 p.m. when grassroots league bowlers – men, women, kids, seniors – can bowl with PBA stars for their own prizes.

Competition begins with eight-game qualifying squads on Saturday. Half of the field will bowl at 9 a.m. and the other half at 3 p.m., with the top 16 players advancing to match play on Sunday. The top 16 will bowl a modified 12-game round robin, head-to-head match play schedule starting at 9 a.m.

Based upon combined 20-game pinfall totals (including 30 bonus pins for matches won), the top four will compete in a stepladder finale at the conclusion of match play.