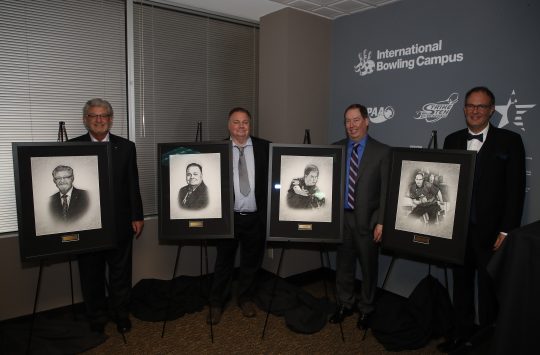 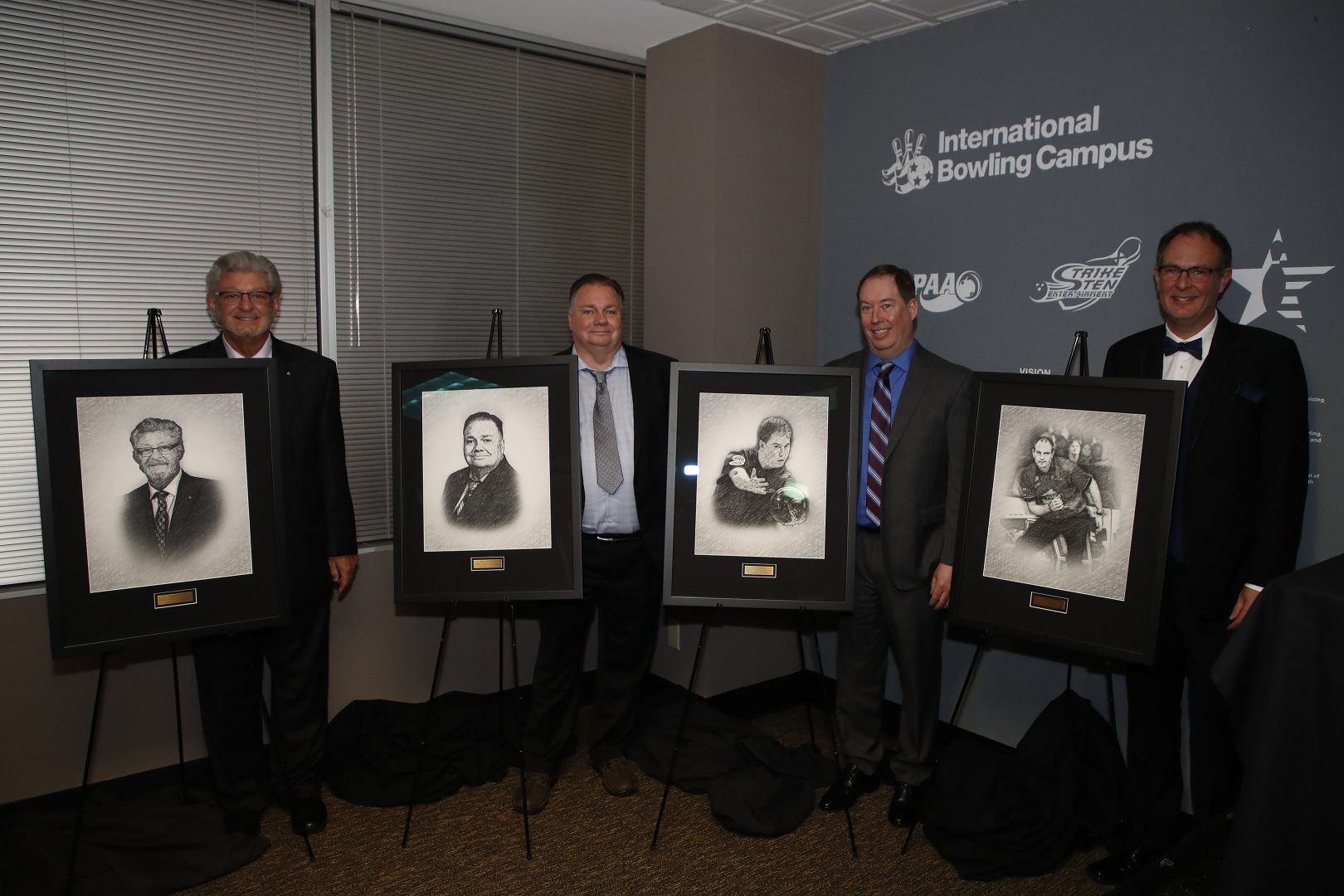 ARLINGTON, Texas (Jan. 5, 2019) – There was no more appropriate place to welcome the Professional Bowlers Association’s four newest Hall of Fame members than the International Bowling Museum and Hall of Fame itself, and that’s exactly what happened Saturday when Finland’s Mika Koivuniemi; Patrick Allen of South Salem, N.Y.; Jim Doty of Indianapolis, and Bob Johnson of Las Vegas joined the PBA’s elite.

The first induction ceremonies ever held within the IBM/HF itself were part of the PBA Hall of Fame Classic weekend which concludes Sunday with the PBA’s first live stepladder finals telecast on FOX Sport’s FS1 channel at 11 a.m. EST. The HOF Classic is the first tournament of the 2019 Go Bowling! PBA Tour season.

But Saturday night was for coats and ties, and cocktail dresses, as two decorated PBA Tour champions, a long-time PBA tournament host and an award-winning bowling journalist were honored for their highly successful careers contributions to professional bowling. It was a ceremony filled with good humor, serious appreciation and moments of emotion.

Koivuniemi, who now resides in the United Arab Emirates where he is coaching the UAE national bowling team, is a 14-time PBA Tour champion who earned his nickname – Major Mika – after winning two majors before he won his first “standard” PBA Tour title. In his first PBA television appearance, he defeated PBA star Pete Weber by a single pin to win the 2000 USBC Masters. A year later he won the U.S. Open, and he claimed the crown jewel of his PBA career in 2011, when he won the $250,000 first prize in the $1 million PBA Tournament of Champions.

“I have sat in these ceremonies many times and don’t remember what anyone said,” Koivuniemi began, “so I thought, how can I do something people will remember? Maybe give my speech in Finnish. Or maybe with my accent, they won’t remember anyway.

“I’ve very proud to be the first European elected to the PBA Hall of Fame,” he continued on a more serious note. “In 1995, I decided to come to the U.S. to see how good I was.”

He related how after one early failure, PBA member Mike Miller offered him some advice that stuck.

“Mike Miller said to me, you have to get better or you’ll go back home in a year,” Koivuniemi said. “I decided to work harder.”

Allen, a 13-time PBA Tour title winner, won PBA’s 2004-05 Chris Schenkel PBA Player of the Year after becoming the second player in PBA history to finish among the top five in all four PBA majors during the same season – finishing second in the USBC Masters and U.S. Open, fifth in the PBA Tournament of Champions and winning the PBA World Championship.

“To make it into the hall of fame on the first ballot was a thrill,” Allen said. “Seventeen years later, it was like it all happened in a flash. But here we are. The day comes when you have to say when. It’s painful, but it’s great to be back among my friends tonight.”

“Doug was responsible for two careers: his own and mine,” Allen said. “He told me I had to learn the technical side of the sport, and then he taught me.”

“It’s been close to 40 years we’ve been hosting tournaments, and I’ve got a lot of stuff on some of you,” he said jokingly to the numerous PBA players in the room.

“It’s been a labor of love,” he said, “but if it wasn’t for my dedicated staff, we’d never host the PBA. I can’t put into words how important this is to me. It’s amazing the talent the players have; you have to love having these guys come to our place.

“Randy Pedersen once called Woodland Bowl the Yankee Stadium of bowling, and he’s right. The list of players who have grown up here is a long one. It’s great to know all of the people who know us as the place where the pros bowl. I’m proud of that.”

Johnson began his journey into bowling journalism at age 15 and eventually served as editor of four national bowling magazines, winning 75 national writing awards for his news, feature and editorial compositions, many of which directly involved the PBA. Currently Senior Editor of Bowlers Journal International and editor of the BJI Cyber Report, he is a recipient of both the International Bowling Media Association’s Luby Hall of Fame Award and the Mid-America Bowling Writers Golden Quill Award.

To mark the occasion, Johnson and his wife Michelle purchased a commemorative brick for the sidewalk outside the IGM/HF, wrote a check to the breast cancer charity of PBA staffer Mary von Krueger’s charity of choice and donated the cost of his Hall of Fame ring to BVL, bowling’s official charity in support of the nation’s military veterans.

“I’m not a ring guy,” Johnson said, “except for this one (pointing to his wedding ring).”

“I learned that one of the secrets to bringing a story to life is what you put between the commas,” he noted. “I’ve always tried to write the best stories I can. I doesn’t always work… Telling PBA players’ stories has been a real pleasure and I hope I can continue doing it for many more years.”