PBA Playoffs Set to Resume on FS1 at 9 p.m. ET with Round of 16 Action 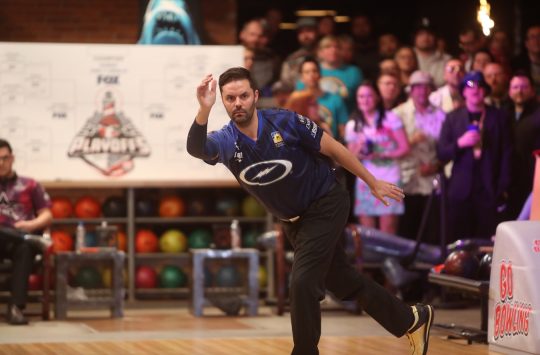 PORTLAND, Maine (April 19, 2019) – The inaugural PBA Playoffs moves into Round of 16 action Monday with two Race to 2 Points matches from Bayside Bowl on FS1 at 9 p.m. ET.

The first match will feature a showdown between two of the Go Bowling! PBA Tour’s premier two-handers, No. 1 seed and four-time PBA Player of the Year Jason Belmonte of Australia vs. No. 17 seed and three-time Tour winner Kyle Troup of Taylorsville, North Carolina.

The second Round of 16 match will feature No. 9 Kris Prather of Plainfield, Illinois, who won his first PBA Tour title in the PBA Scorpion Championship during the PBA World Series of Bowling X in March, against two-time tour winner and No. 8 qualifier Tom Daugherty of Tampa, Florida. Prather won his Round of 24 match over No. 24 Darren Tang of San Francisco, 207-183. As the No. 8 seed, Daugherty received the last of eight first-round byes.

For the Race to 2 Points format, each game won in the match is worth one point. If the players split the first two games, a ninth and 10th frame tie-breaker is used to award the deciding point.

Round of 16 action continues on FS1 April 29, May 6, and May 13 at 9 p.m. ET. The eight winners advance to the Round of 8 competition beginning May 20 on FS1. The four survivors from the Round of 8 will return to Portland for the semifinal and final rounds June 1-2, with both shows airing live on FOX at noon ET.

To view a PBA Playoffs bracket click on: https://www.pba.com/Content/Images/playoffs/2019_PBA_Playoff_Bracket.pdf