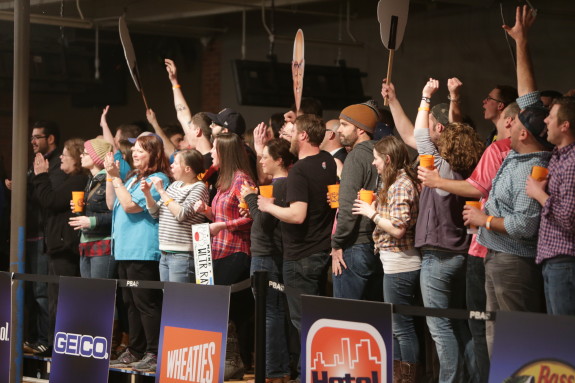 CHICAGO – After its rousing, raucous, outrageously fun first-ever visit to Maine, the Professional Bowlers Association will return to Bayside Bowl in Portland for Maine Event 2016 including its fourth annual round of PBA League competition and the Xtra Frame PBA Maine Shootout, March 30-April 6.

The draft to fill team rosters for 2016 will be done before a live, international audience watching on PBA’s online bowling channel, Xtra Frame, on Thursday, Dec. 17, during the GEICO PBA World Series of Bowling VII from Reno, Nev. (time to be announced).

The eight-team PBA League will compete in two days of team competition on April 2 and 3 for delayed telecast over a span of four consecutive Sundays, April 17-May 8, on ESPN. All four PBA League shows will air at 1 p.m. ET.

Teams will draft in the reverse order of how they finished in 2015 (KingPins first, Atom Splitters last). Managers will be allowed to protect up to three players from their 2015 rosters. All players who would like to be considered for the PBA League must declare their intentions by no later than Nov. 13 (managers will declare their protected players by no later than Oct. 26).

Team competition will remain the same as 2015: preliminary rounds will feature Baker-format elimination matches leading to the Elias Cup Finals which will be decided by points earned in singles, doubles, trio and Baker team matches.

Other highlights of the 2016 program include:

● The draft will be held on Thursday, Dec. 17, prior to the live ESPN coverage of the PBA World Championship from the National Bowling Stadium in Reno. The draft will be video-streamed live on Xtra Frame at a time to be announced.

● All PBA members in good standing are invited to declare themselves eligible for the draft.

● After teams are selected, managers will have until Jan. 8 to make trades, if they wish.

The PBA’s return to Portland will include a day of practice and pro-am activity when Maine adult, youth and senior league bowlers will have a chance to bowl with the stars of the PBA, followed by two days of Baker-format team competition for delayed telecast on ESPN, and three days of Xtra Frame PBA Maine Shootout competition, a singles event with a PBA Tour title at stake.

2016 PBA MAINE EVENT SCHEDULE
(All times are subject to change)