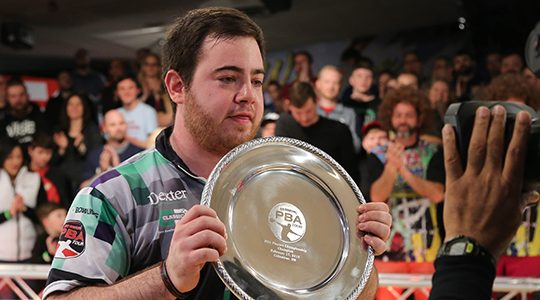 Both players will be among an expected field of 92 entrants who will return to Wayne Webb’s Columbus Bowl for the second major of the 2020 Go Bowling PBA Tour season Feb. 9-15. In addition to a major title and the $75,000 first prize, the $1 million perfect game bonus will again be in effect for the Players Championship if the winning player bowls a perfect game in the title match of the live finals on FS1 on Saturday, Feb. 15 at 5:30 p.m. ET.

Already in the young 2020 season, the Players Championship is part of a grueling stretch as the second of three consecutive majors in as many weeks. The PBA Tournament of Champions is currently underway at AMF Riviera Lanes in Fairlawn, Ohio and immediately following the Players Championship the tour travels to Lincoln, Nebraska for the U.S. Open Feb. 16-23.

At age 22 Simonsen, the No. 2 seed, won the 2019 Players Championship to become the youngest player to win two PBA majors, defeating No. 1 seed Belmonte 232-212 in the title match at Wayne Webb’s Columbus Bowl.

In 2019, Belmonte, who won the PBA Tournament of Champions the week before, held a three-pin lead in the fifth frame of the title match when he left a 4-6-7-9-10 split. Both players then threw strikes from the sixth through the ninth frames but Belmonte left the door open for Simonsen when he left a pocket 7-10 split on the first shot of the 10th frame.

“To have a second major at this point in my career, I’m speechless,” said Simonsen, who won the 2016 USBC Masters at age 19 to become the youngest to win a major. “Jason is the guy everyone is gunning for and as a fellow two-handed player, he’s an inspiration.”

All qualifying and match play rounds will be livestreamed by FloBowling. To subscribe, visit flobowling.com. FloBowling also will livestream the FS1 finals to its international subscribers.