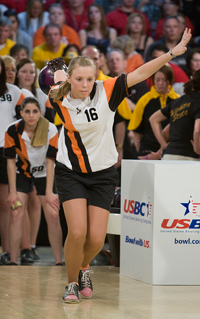 WICHITA, Kan. – Pikeville senior Kayla Bandy can now add another trophy to her growing collection. The one she wanted all along – a national championship.

The championship matches will air nationally on CBS College Sports (formerly CSTV) at a later date.

“This is the best day of my life. No question about it,” said Bandy, who was an All-American all four years in college and the 2004-05 NCBCA Rookie of the Year. “It doesn’t erase our previous disappointments here, but it makes us realize we went through them for a reason.

“All the tears and hard work paid off for this moment.”

The Bears, ranked No. 2 in the NCBCA Top 20, denied top-ranked Wichita State of a repeat national championship, and a dual national title for the school. Wichita State’s men defeated UNLV, 2-0, earlier in the day to win the men’s title.

They did so by taking advantage of a crucial Wichita State miscue near the end of Game 1.

Wichita State sophomore Sandra Gongora fouled in the eighth frame while working on a spare. Pikeville junior Jennifer Wright, who was a part of Wichita State’s 2005 championship team before transferring, capitalized with a strike in the ninth on the way to a 184-171 victory.

Strikes by Bandy, sophomore Sarah Germano, Wright and Galante in four of the first five frames got Pikeville off to a hot start in a 183-158 championship-clinching victory in Game 2.

“We just breathed, relaxed and threw our shots,” Bandy said. “We stuck to our strategy, stayed clean and stayed together.”

Pikeville, which also defeated Wichita State for its first national title in 2004, advanced to the championship match with a 4.5-3.5 semifinal victory earlier Saturday to eliminate Maryland-Eastern Shore, the 2008 NCAA women’s champion.

Wichita State, which was seeded No. 1 after Thursday’s qualifying, eliminated Morehead State, 4-0, in Saturday morning’s semifinals.

Pikeville freshman Ashly Galante, the 2007-08 NCBCA Rookie of the Year, was named the women’s Most Valuable Player. 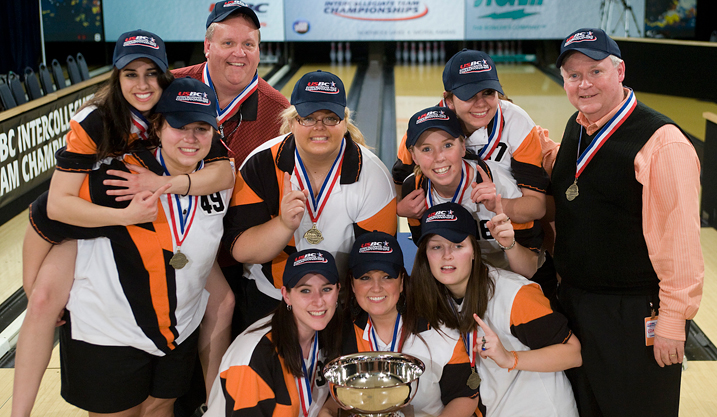 “I can’t explain how happy I feel right now,” said Galante, a Team USA member in 2007 who bowled anchor throughout the tournament. “Wichita State is a great team with a lot of talent. For us to do what we did was just amazing.”

The USBC Intercollegiate Team Championships featured the top 16 men’s and top 16 women’s college bowling teams in the country vying for national titles. All 32 teams competed in best-of-7, double-elimination match play in the Baker format Friday, after which the field was pared down to four in both the men’s and women’s divisions.